Congress Should Revert to Section 702 as Passed in 2008, If That’s What the Spooks Want! 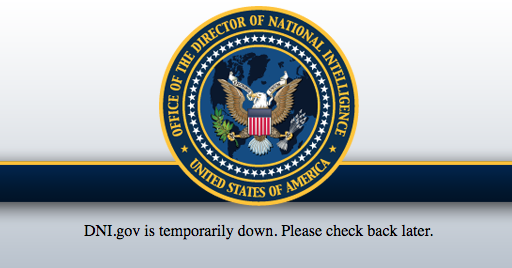 Congress is passing a continuing resolution with an extension of Section 702 today, giving Congress one month to figure out how it will reauthorize the surveillance program.

Reauthorizing Section 702 before it expires is vital to keeping the nation safe. Let us be clear: if Congress fails to act, vital intelligence collection on international terrorists and other foreign adversaries will be lost. The country will be less secure.

We also believe it is important that Congress reauthorize Section 702 before it expires on December 31, 2017.  Although the current Section 702 certifications do not expire until April 2018, the Intelligence Community would need to start winding down its Section 702 program well in advance of that date.  Winding down such a valuable program would force agencies to divert resources away from addressing foreign threats. Short-term extensions are not the long-term answer either, as they fail to provide certainty, and will create needless and wasteful operational complications. We urge Congress, therefore, to act quickly to reauthorize Section 702 in a manner that preserves the effectiveness of this critical national security law before it expires.

Where the release gets truly inexcusable, however, is how they flip their demand that this reauthorization codify certain dubious practices and not limit other ones. Congress is not required to make changes, the spooks say, without telling you that even the SSCI bill makes at least one reform, and most of the bills on the floor today make more serious ones. Those are the bills the IC prevented from passing.

To be clear – Congress is not required to make any changes to Section 702. The Intelligence Community conducts and uses 702 collection in a manner that protects the privacy and civil liberties of individuals.

The spooks pretend, as they have before, that the Ninth Circuit approved back door searches, which it didn’t.

Every single court that has reviewed Section 702 and queries of its data has found it to be constitutional.

They then take their emphasis on the word targeting a step further than normal to avoid telling you that their “targeted surveillance” of location-obscuring servers like Tor and VPNs actually collects on US persons, and the “oversight’ of that collection allows entirely domestic communications collected via such “targeted” collection to be used in criminal cases.

The Intelligence Community’s use of Section 702, which permits targeted surveillance only of foreign persons located outside the United States, is subject to extensive oversight and incorporates substantial protections to protect the privacy and civil liberties of individuals.

Here, the spooks don’t acknowledge how much has changed in between the various passage of these bills.

In short, we believe Congress got it right in 2008 when it passed Section 702 and in 2012 when Congress reauthorized it.

Consider: if the 702 on the table today were 702 as it existed in 2008, Congress would pass it gladly. That’s because no backdoor searches were permitted (though FBI was already doing them), to say nothing of the 2014 exception that permits the collection of US person location-obscured communications. And upstream “about” collection wasn’t affirmatively permitted either.

In other words, if Congress could have Section 702 as it passed in 2008, it’d be a vast improvement from a privacy perspective than the program as it exists right now (and also wouldn’t include a counterproliferation certificate or approval to target cybersecurity targets).

Note, too, the spooks don’t admit that most of Congress didn’t know about backdoor and other kinds of US person searches in 2012.

All that said, even after saying that Congress had it right in 2008, the spooks return to the coded demands that Congress not do a single thing to limit the spying on Americans that has gotten added to the program since 2008.

Nevertheless, the Intelligence Community continues to be open to reasonable reforms to Section 702 to further enhance the already-substantial privacy protections contained in the law, but we simply cannot support legislation that would impede the operational efficacy of this vital authority.

There were many “reasonable reforms to … further enhance the already-substantial privacy protections contained in the law.” Those were the bills the IC refused to let pass, which is why we’re here on one of the last legislative days of the year, punting this legislation for a month.

A Thousand Days of Hell in Yemen Produce a Million Cases of Cholera On Pierre Bourdieu Part 2: Systems of Domination