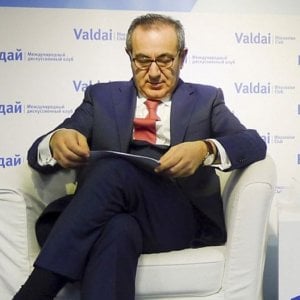 It was back on October 30 of 2017 that George Papadopoulos’ plea deal arising from Robert Mueller’s investigation was unsealed. The plea agreement indicated a central role for Joseph Mifsud. Mifsud apparently was the first to inform Papadopoulos that Russia had dirt, in the form of emails, on Hillary Clinton and then participated in ongoing efforts by Papadapoulos to arrange senior-level meetings between Russia and the Trump campaign.

I noted on November 2 that although the earliest reports described Mifsud as associated with the now-closed London Academy of Diplomacy, he had an additional affiliation that mapped to the same organization, the London Centre of International Law Practice, claimed by Papadopoulos at the time he joined the Trump campaign. Just under a week later, reports began to surface that Mifsud had disappeared. As recently as December 20, NPR reported that he still could not be found.

Yesterday, BuzzFeed News reported that Mifsud’s biography had been deleted from the website of Link Campus in Rome:

References to Joseph Mifsud, the Maltese professor who court documents say told Trump campaign foreign policy adviser George Papadopoulos that Russia had “dirt” on Hillary Clinton, have been removed from the website of the university in Italy where he’s worked for years.

When he was unmasked as the unnamed “overseas professor” cited in the documents filed in October by Trump–Russia special counsel Robert Mueller, Mifsud led a three-year degree course in political science and international relations, according to a bio then on the website of the Link Campus University in Rome. The Maltese academic was also listed as an overseas professor on the LCU’s faculty pages, archived versions of the website show.

The bio now leads to a 404 error page, while Mifsud’s name no longer appears on the LCU’s faculty pages.

Interestingly, this report from November 6 indicates that Link Campus is “a private university established as a
subsidiary of the University of Malta.” That seems quite significant since Mifsud is from Malta.

The BuzzFeed piece concludes with this paragraph:

Also now missing from the LCU faculty pages is Nagi Idris, director of the London Centre of International Law Practice, an organization with which both Mifsud and Papadopoulos claimed to have been affiliated in the past. Idris was previously listed as an overseas professor on the faculty pages, according to archived versions of the website. And in an online bio he describes himself as a visiting professor at the university.

So Link is now removing any online association with both Mifsud and Idris, who are both connected to the London Centre of International Law Practice. It appears to me that Nagi Idris may be more than just another bit player who claimed association with these two quasi-academic operations. The Medium piece referenced above that pointed out the Maltese connection for Link Campus provided a deep dive into corporate records associated with the London Centre of International Law Practice:

LCILP began as an offshoot from another company — EN Education Group Limited — which describes itself as “a global education consultancy, facilitating links between students, education providers and organisations with an interest in education worldwide”.

EN Education is owned and run by Nagi Khalid Idris, a 48-year-old British citizen of Sudanese origin. A biographical note about Idris describes him as “a senior international lawyer and Fellow of the International Bar Association, with over 19 years of legal consultancy experience”.

Because he is the owner of the company that gave rise to the London Centre for International Law Practice, Idris could well lie at the heart of the biggest mystery we have yet to unravel: how and why Mifsud and Papadopoulos were put into their various roles and then brought into contact with one another. With Mifsud references now scrubbed from the LCILP website and Idris  (as well as Mifsud) scrubbed from the Link Campus website, Idris does not seem to want that information to come to light.  Idris appears to be just as unqualified for his role in founding LCILP as both Papadopoulos and Mifsud are for the positions they held there and elsewhere. With Idris, though, we are likely starting to get very close to those who are pulling the strings.

As Marcy noted here, the timeline of contacts between Papadopoulos and Mifsud are damning in their concentration on arranging meetings between the Trump and Putin camps. So, to me, when we find out who helped Idris to set up the London Centre for International Law Practice as a vehicle for bringing together Papadopoulos and Mifsud, we are likely to find out who wanted the Trump Campaign to have high level contacts in Russia. Whoever that is seems to be putting a lot of continuing effort into obscuring the puppetmaster while hiding a puppet or two. After all, it’s not like we’ve ever seen spies hanging around quasi-academic programs in international relations or anything.

Speech and Email Release: The Three Public Statement Signals Tied to Russia’s... Reminder: The Guy Killing the HPSCI Investigation Was Part of Trump’s...