The 702 Capitulations: a Real Measure of the “Deep State” 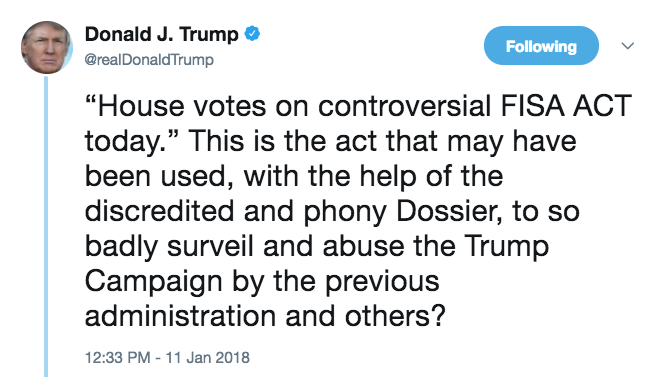 There were two details of the Section 702 reauthorization in the House that deserve more attention, as the Senate prepares for a cloture vote today at 5:30.

First, in the Rules Committee hearing for the bill, Ranking House Judiciary Committee member Jerry Nadler revealed that the FBI stopped engaging with his staffers when the two sides reached a point on negotiations over the bill beyond which they refused to budge.

Effectively, FBI just used the dual HJC/House Intelligence jurisdiction over FISA to avoid engaging in the legislative process, to avoid making any concessions to representatives supposedly overseeing this program.

As a result, the final bill included only a sham warrant requirement — one that will give criminal suspects more protection against warrantless search than it gives people against whom the FBI has no suspicion — and provided an easy way for the NSA to turn “about” collection (which has been the source of repeated NSA violations of FISA over the years) back on.

Then there was the effort Nancy Pelosi made to use the President’s reactive FISA tweet to impose a few more limits on the warrant requirement. In a filibustering speech, she suggested that Trump’s tweet claiming his had been surveilled and abused under the law (in reality, Title I warrants were used during the campaign, but Section 702 has likely been part of the investigation as well) necessitated a motion to recommit instructing HPSCI to boost the protections for Americans.

Pelosi had to have know the motion would fail (it did, with just six of the most libertarian Republicans joining Democrats in support). She counts votes better than anyone.

What the vote was really about was an effort not to fix the real problems with the bill. Nor was it a meaningful effort to add anything but illusory protections to the bill. It was an effort to make a vote in support of the bill more politically palatable. Pelosi (and Adam Schiff, who worked closely with Pelosi on this front) appears to have known that there will be political costs for supporting this bill, perhaps especially in San Francisco where one-fifth of Pelosi’s constituents are Chinese-American, one of the groups most disproportionately affected by the spying program.

She knew she was going to have to vote for the bill, political cost and all, and was trying to use Trump’s tweet to minimize the costs of doing so.

These two events, in my opinion, show how dysfunctional legislation affecting the “Deep State,” the entrenched national security bureaucracy, is. There is a clear political recognition among the Democratic leaders cooperating in passing the bill that the bill goes too far. Probably, they worry about what will happen when we learn how Jeff Sessions will use the unreviewable authority to deem either warrantless back door searches for Americans’ names or retention of Tor and VPN domestic collection a “national security” issue to target Democratic constituencies.

But that recognition was not enough to muster the political will to oppose the bill.