Duty of Candor: The Timing of the Sessions News 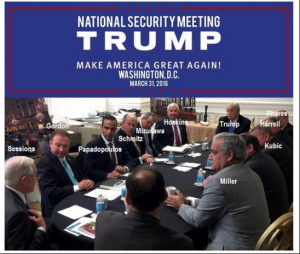 There was, however, this story, reporting that three sources say Jeff Sessions was not as dismissive of George Papadopoulos’ plan to reach out to Russians as JD Gordon has claimed.

Three people who attended the March campaign meeting told Reuters they gave their version of events to FBI agents or congressional investigators probing Russian interference in the 2016 election. Although the accounts they provided to Reuters differed in certain respects, all three, who declined to be identified, said Sessions had expressed no objections to Papadopoulos’ idea.

One person said Sessions was courteous to Papadopoulos and said something to the effect of “okay, interesting.”

The other two recalled a similar response.

“It was almost like, ‘Well, thank you and let’s move on to the next person,’” one said.

As the story notes, this conflicts with Jeff Sessions’ November 14 sworn testimony to the House Judiciary Committee.

So in the wake of the Attorney General firing McCabe for violating his duty of candor, three current or former Trump associates leaked that he lied to the House.

The thing is, there can’t be that many people who these sources could be. I’m not sure the annotations from Seth Abramson (above) are all correct, but here’s what it looks like.

Sessions and Gordon are on the record stating Sessions pushed back. Trump hasn’t testified yet.

One may well be Papadopoulos.

That leaves, starting with Abramson’s guesses (here’s a later list of Trump’s national security advisors, which should round out Abramson’s):

I raise all this because, while Republicans in Congress are largely dodging the issue of protecting Mueller from Trump, some people closer to the investigation are calling Sessions on his hypocrisy. That might be far more dangerous to the Trump administration in the near term.

Another Shoe Dropped: Cambridge Analytica Used Its Own Kompromat “What Did the President Do and What Do His Lawyers Claim He Was Think...