Did Ecuador Gag Julian Assange for Interference in Spain AND the US?

On Wednesday, Ecuador shut off Julian Assange’s access to the Internet and (far more interestingly) prohibited any visitors to the Embassy. It has been assumed the gag was a response to this tweet likening the German arrest of the Catalan leader Carlos Puigdemont on Spanish rebellion charges to the historical Nazi arrest of Catalan’s leader. 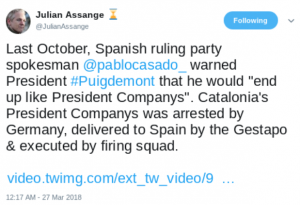 That’s definitely one of the two things that has gotten Assange in trouble with his hosts before. But I wonder if that’s the only thing that precipitated this gag.

In its statement about the gag, the government of Ecuador said Assange’s social media messages “put at risk the good relations the country has with the UK, the rest of the states of the EU, and other countries.”  It’s not just Spain and the UK that Ecuador is trying not to piss off.

And yesterday, in response to the campaign to lift the gag on Assange, Ecuador released another statement insisting that it had acted within the constitution and international law. As part of the statement, it reminded Assange of his duty not to interfere in the political activities of other countries prohibited to foreigners.

The Foreign Ministry also emphasizes that, beyond this commitment, all persons, regardless of their status, including those under international protection, are obliged to respect the norms of international law that govern peaceful coexistence and friendly relations. cooperation among the nations, citizens and civilized peoples of the world, among them the duty to abstain from political activities in a foreign country, provided for in Article 38 of the American Declaration of Rights and Duties of Man. The legal text states that every person has the duty not to intervene in political activities that, in accordance with the law, are exclusive of the citizens of the State in which he is a foreigner.

And while the gag closely followed Assange’s tweet, it also followed the detention and questioning of Trump advisor Ted Malloch when he arrived in Logan airport Tuesday. Among the questions the FBI asked Malloch, they asked about his contacts with Roger Stone and Wikileaks.

“The questions got more detailed about my involvement in the Trump campaign (which was informal and unpaid); whom I communicated with; whom I knew and how well — they had a long list of names,” Malloch said. “They seemed to then focus more attention on Roger Stone (whom I have met a grand total of three times and with groups of people); Jerome Corsi, a journalist who edited a memoir I had written some years ago; and about WikiLeaks, which I knew nothing.”

He said was asked specifically if he had visited the Ecuadorian Embassy in London, where WikiLeaks founder Julian Assange has been holed up for nearly six years. He had not, he said.

The FBI let Malloch go, but not before seizing his phone and subpoenaing him to appear before Mueller’s grand jury on April 13.

That’s why I’m so interested that Ecuador has prohibited Assange visitors. The one time, in the past, they cut off his Internet access seemed to be a response to his release of emails designed to influence US politics, not Spanish politics. And his well-known use of mules to carry data to him would necessitate cutting off human visitors as well if Ecuador wanted to prevent his participation in foreign affairs.

In any case, if Mueller’s team ever provides solid evidence of more malign Assange involvement in the election, this is the kind of response I’d expect Ecuador to take.