Paul Manafort has submitted two motions to suppress information collected pursuant to two warrants. The first, to suppress the fruits of a May 27, 2017 search of a storage facility in Alexandria, was submitted in timely fashion on April 6. The second, to suppress the fruits of the widely publicized no-knock search of his Alexandria condo on July 27, 2017 [note, Mueller filings make clear it was not a no-knock search], was submitted late, though Judge Amy Jackson Berman let him do so even though he only asked permission to do so hours before the deadline.

While I don’t think these motions, particularly as submitted, will succeed, I think they’re interesting because in addition to seeking to suppress evidence in the ConFraudUs prosecution he has already been charged with, appears to seek to suppress any evidence obtained relating to the election tampering conspiracy.

The storage unit search feeds the base but misrepresents the facts

For reasons I don’t understand, Manafort has argued these two motions in nested fashion. He argues the storage unit search was improper and collected data outside the scope of the warrant, meaning any fruit of that search should also be suppressed (though that may aim to suppress other searches not at issue here).

The storage unit search is one that online conspirators have talked a lot about, suggesting the search was done pursuant to FISA order, or in other ways done improperly. So by seeking to suppress this search, Manafort is doing what is expected of him by Trump’s frothy base.

That said, the motion itself makes a number of claims that the exhibits submitted to support the motion don’t support. The motion argues that:

That’s not backed by the exhibits. For example, the affidavit notes that, while Trusko showed the FBI the storage facility was a former employee of Davis Manafort (the allegation in the motion), he was still an employee of Paul Manafort, just another company Manafort ran.

On May 26, 2017, your Affiant met with [redacted], a former employee of Davis Manafort Partners, and a current employee of Steam Mountain, LLC, which is a business currently operated by Paul Manafort. [redacted] advised that he is a salaried employee of Manafort’s company, and that he performs a variety of functions for Manafort and his companies as directed by Manafort.

The storage facility lease clearly shows Trusko to be the occupant, with Rick Gates listed as an alternate contact and Manafort just as an Authorized Access Person.

Manafort’s going to have a tough time arguing that the person on the lease is not a person with the authority to enter the facility.

Finally, the FBI agent who did the search counted “approximately 21 bankers’ boxes that could contain documents, as well as a five-drawer metal filing cabinet.” But the return of the search warrant appears to show just nine boxes of documents, meaning the FBI took just a fraction of what was in the storage unit. 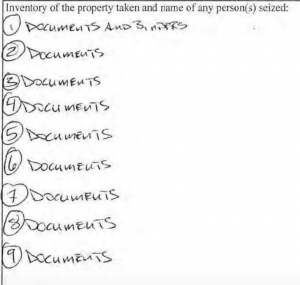 While this application asks for records on the Podesta Group (but not, curiously, Vin Weber or his Mercury group, the other lobbying company Manafort got to work for the Party of Regions), it doesn’t ask for anything specifically related to the election conspiracy.

Even before you consider the fact that FBI got this warrant without hiding any of the details that Manafort claims makes the search suspect, those claims seem misleading at best. This motion is almost certainly going nowhere, except to feed the frothing conspiracists.

I’m more interested in the motion to suppress the condo search and its fruits.

To be fair, this motion is not much stronger than the first one. Manafort doesn’t even present as much reason to throw out this search as he did for the storage unit. He basically just argues the warrant is overbroad, agents exceeded the scope of it, and DOJ improperly has held on to things not covered by the scope of the warrant. He does claim the warrant doesn’t incorporate the affidavit that lays out what can be searched, which I don’t understand because the application does say to refer to the affidavit. Curiously, while in the aftermath of the search, stories reported that the search had improperly seized privileged materials, he doesn’t complain about that in this motion (the docketed materials make it clear that FBI separated out any potentially privileged materials).

That said, I think some of the claim that the warrant was overbroad will need a careful response.

Three specific complaints may suggest what Manafort’s really worried about

Amid the larger argument about overbroad search, Manafort says several things that I find of particular interest. For example, the motion complains that by asking for Manafort’s “state of mind” (either specifically as it relates to the June 9 meeting more broadly).

a warrant directing agents to seize all evidence of the subject’s “state of mind” does not restrict the agent’s discretion at all. Indeed, the warrant may just as well have told agents to search for and seize any evidence that the subject committed the subject offenses – all of which require knowledge and intent.

It seems DOJ may have more specific concerns about Manafort’s state of mind when dealing with Russians, because it goes to his many mixed motivations tying to the election.

Then, Manafort argues, curiously, that the FBI took devices that could not conceivably include evidence like some iPods.

For example, the search warrant inventory of electronic devices seized or imaged includes things such as an Apple iPod music device and some Apple iPod Touch music and video devices.

Except that’s not right: you can use Signal on iPods, so these might have stored communication. Which would be precisely the kind of thing that would be of most interest: devices that could be used for encrypted comms that would not show up on cell records.

Finally, Manafort complains, at length, that DOJ hasn’t given any of this back.

They do so citing longer periods of review, so it’s unlikely this complaint will go anywhere.

But as I’ve said, Manafort has a great incentive, in his likely futile suppression motions, to try to force DOJ to cough up more information about the case in chief. And by demanding that DOJ start giving stuff back, he may force them to show what they consider valuable or at least still can’t make sense of.

Ultimately, this suppression motion may be more about trying to prevent the government from keeping stuff supporting even more charges while it pursues the two classes of charged crimes and the soon to be charged crimes named in the affidavit.

Finally, just to prove that bmaz was right all along, I’ll note that this search warrant permits the FBI to take things relating to Manafort’s wife Kathleen.

bmaz has long been wondering why DOJ didn’t also charge her, which might provide more leverage to get Manafort to flip than charging Gates would. References in the affidavit to them reorganizing their lives suggests Kathleen might not have been as persuasive as she once would have been.

*Update: In Mueller’s response to this, they make it clear this was not a no-knock warrant, and I’ve corrected the title accordingly.

The warrant application had not sought permission to enter without knocking. In issuing the warrant, the magistrate judge authorized the government to execute the warrant any day through August 8, 2017, and to conduct the search “in the daytime [from] 6:00 a.m. to 10:00 p.m.” Doc. 264-1 at 1. The government complied fully with those date and time conditions, and Manafort does not contend otherwise.