A Thinking Person’s Guide to the Stefan Halper Conspiracy Theory

For some time, I’ve been agnostic about whether Chuck Ross’ series on Stefan Halper derived from his own discussions with George Papadopoulos, Carter Page, and Sam Clovis, or whether he relied on leaks from HPSCI.

Today, he gave one of the leading comments he often does, about Paul Ryan’s claimed concern about “FISA abuse.” (Ryan, remember, pushed through 702 reauthorization this year without reforming a single one of the abuses laid out in this report, but apparently Chuck’s gonna play along with the notion that Ryan gives a shit about FISA.) 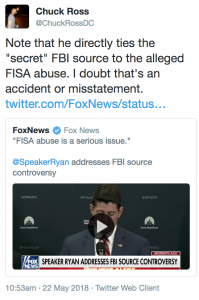 That mirrors Ross’ own logically nonsensical focus on the dossier as a source for the Carter Page FISA order in conjunction with Halper. Which, especially since other journalists are making it clear the Halper focus is coming from Hill Republicans, suggests Ross was getting leaks from Republicans.

That’s even more true of this interview with Sam Clovis. In it, Clovis makes it very clear the meeting did not stick out in his memory.

It was an academic meeting. It was not anything other than him talking about the research that he had done on China.

No indication or inclination that this was anything other than just wanting to offer up his help to the campaign if I needed it.

After describing how he hadn’t opened up attachments Halper sent later in the month, he said, “that is how little this registered with me.”

And yet, somehow, by March, someone had told Ross about this meeting.

Clovis seems to derive his memory of the meeting, in significant part, from the documentation he does (four emails setting the meeting up) and doesn’t (any notes) have about it.

There’s a record of the exchange of emails that we had, four emails to set the appointment.

I had my notebook. Always take notes and always keep track of what’s going on. And there wasn’t anything — I didn’t have any notes on the meeting cause there must not have been anything substantive that took place.

That suggests someone knew to go back to look for communications involving Halper. Now, if HPSCI requested all the comms campaign aides had with investigative target Carter Page, then Clovis would have turned over these emails (which mentioned Page but probably discussed China, not Russia), and HPSCI staffers could have found the tie. If HPSCI only asked for Russia-related comms involving Page, then someone got Toensing or Clovis to search for Halper emails themselves.

Clovis explains that he’s bothered, now, about the meeting because he thinks he was used as an excuse to reach out to George Papadopoulos.

He had met with Carter Page. He had used that to get the bona fides to get an appointment with me.

Then I think he used my meeting as bona fides to get a meeting with George Papadopoulos.

Remember, one of the inane complaints in the Nunes memo is that the Carter Page FISA application mentioned Papadopoulos.

The Schiff memo explains that Papadopoulos got mentioned because, after Alexander Downer told the FBI that Papadopoulos had told him the Russians were going to release Hillary emails to help Trump, they opened a counterintelligence investigation into the Trump campaign.

In other words, the frothy right likely believes, like Clovis, that Halper was networking as a way to get to Papadopoulos, and that in some way ties to the FISA application against Page.

And he may well have done so! As TPM clarifies some confusion created by WaPo, both Page, Clovis, and Clovis lawyer Victoria Toensing agree that Halper mentioned Page when he reached out to Clovis.

Clovis’ lawyer, Victoria Toensing, previously said, according to the Washington Post that the informant had not mentioned his other Trump contacts when reaching out to Clovis. Clovis said he wasn’t sure “where she got that information,”since she had access to the emails setting up the September 2016 meeting.

Toensing, in an phone interview Tuesday with TPM, backed up Clovis’ account. She told TPM that the informant had said in an email to Clovis that Page had recommended that they meet. She also claimed that the informant had told Page when they met at the conference that he was a big fan of Clovis’. Page confirmed Toensing’s account in an email to TPM.

Halper met with Clovis on September 1 and then reached out to Papadopoulos the next day.

Though note: Page says Halper raised Clovis at the July conference where they met, a meeting that occurred before dossier reports started getting back to FBI (particularly to the people investigating the hack-and-leak) and before the Papadopoulos report. That either suggests the FBI already had concerns about Clovis by then, or Halper was more generally networking with Page along with checking out someone who had been a live counterintelligence concern in his own right since March and for years beforehand.

Here’s where things start to go off the rails for this whole conspiracy theory, though. Clovis (who, remember, testified to Mueller’s team in the days before Papadopoulos’ cooperation agreement was unsealed, and who therefore may have his own false statements to worry about) believes that the FBI had no business trying to ask Papadopoulos about his April knowledge of Russians dealing Clinton emails in a way that would not arouse Papadopoulos’ suspicion.

What unsettled me … is what he tried to do with George Papadopoulos and that was to establish an audit trail from the campaign or somebody associated with the campaign back to those Clinton emails, whether or not they existed we don’t know.

Clovis believes, as does the entire frothy right, that the FBI had no reason to check out leads from someone who predicted the Russians would leak dirt from Hillary to help Trump a month before it became publicly known.

Somehow, Clovis conveniently forgets that stealing emails is a crime. And the FBI had been investigating that crime since June 2016, a month before learning that Papadopoulos might have known about the stolen emails before the FBI itself did.

In other words, at the core of this entire conspiracy theory (on top of pretending that Carter Page wasn’t already a counterintelligence concern in March, as all the designated GOP stenographers do) is the GOP fantasy that the FBI had no business trying to chase down why Papadopoulos knew of the theft before the DNC itself did.

And they’re making an enormous case out of the fact that FBI used Halper — a lifelong Republican to whom Papadopoulos could and did lie to without legal jeopardy — to interview someone Clovis claims was “ancillary” to the campaign at the time.

It’s also clear to me that they misread George’s relationship with the campaign entirely, so, because he was not, he was ancillary at best at that point.

So that appears to be where this is heading: an attempt to criminalize a Republican networking with a goal of learning whether George Papadopoulos, and through him, Sam Clovis and the rest of the campaign, committed what Papadopoulos himself has said (though this is legally incorrect) might amount to treason.

Ultimately, it comes down to this: the GOP doesn’t think Russian theft of Democratic emails was a crime and therefore doesn’t think FBI had reason to investigate Papadopoulos’ apparent foreknowledge of that crime.

George Papadopoulos Was Trying to Hide Evidence He Thought Might Amount to Treason... Did the FBI Have a Chance to Fix Their Lies about Encryption in 2016?