Trash Talk Returns From The Dead 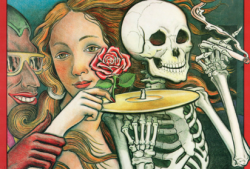 Hi there Wheelheads! Trash Talk has been on hiatus since April, nearly five months, and that was kind of a one off NFL Draft discussion. But real football is back, fall is….almost….in the air (hey, it’s going to be 107º here today). For those new to the Emptywheel blog, Trash is open season for anything, and all about fun, music and cutting loose, even though it starts off sports based. So, welcome one and all, and welcome back to the longtime folks. Let’s rock and roll!

Okay, Saturday is for the student athletes, better known as NCAA, Inc. We have a bit of a big national game tonight just down the road in Tempe, with the Sparty’s of Michigan State coming to meet the newfangled ASU Sun Devils. The Devils have all new coaching, with former NFL head coach and ESPN analyst Herm Edwards taking over. He has promised a “corporate approach”. No idea what that means, and there is much fear and trepidation where a once proud, but now withered, program is headed. ASU won it’s opener over a woefully outmatched UTSan Antonio team, so that is no indication. The Spartans, expertly coached by Mark Dantonio, however, are a far different thing. It could get ugly for the home boys. The Devils are not without some weapons though. Senior QB Manny willing is a great kid, and a pretty heads up field captain. Receiver N’Keal Harry is one of the best receivers in the country and a potential lottery pick for the NFL later. On an ironic note, Sparty’s starting QB, Brian Lewerke, is a former high school star from right here. We shall see how Herm’s “corporate” style works, but place your money on MSU.

In some other college games of note, the Sooners host UCLA in Norman Oklahoma. The Bruins are already 0-1 and headed to 0-2. Georgia at South Carolina might be pretty good, though the 3rd rated Dawgs look like too much for the Cocks. If there are upset specials, I’d look to Nebraska at Colorado or Penn State at Pitt. Without much question, the best game of the day is #17 USC at #10 Stanford in Palo alto. That is a hell of a matchup for so early in the season. USC is starting a true freshman at QB. JT Daniels looked pretty promising versus UNLV in the Trojan’s opener, but, man The Tree is loaded. Looks like tough sledding for Tommy Trojan tonight.

In the pros, the Iggles edged out the Falcons, barely, in a penalty filled lackluster game Thursday night. A win is a win I guess, and Nick Foles keeps winning. The Niners at Minnesota might be interesting, Jimmy G versus Kirk Cousins. Lot of folks expecting big things from San Fran this year, but the Vikes are stacked. I don’t know why, but the Steelers at Browns interests me. There is a lot of noise around the Browns, but than they play yet?? Stillers are a tough opening game. Tennessee at Miami is a matchup of two teams that either both could be pretty good, or both could be pretty bad. Who wins that one? The Chargers are a real sleeper. Their team really started to come together last year, and they still have Phillip Rivers. Joey boss apparently out though, and he is a big play guy. The Bolts are at home in their cracker box soccer stadium, but still trust Andy Reid and the Chefs more.

Washington and Cardinals here will be interesting. Cards, like the Sun Devils above, are all changed in coaching and roster. How will Sam Braford work with Larry Fitzgerald? Can any of the other really young Cards receivers play? A LOT of unknowns to be fleshed out in that game. The Bears visit a kind of revamped Green Bay, but, uh, the Pack has that Aaron Rodgers guy. Seattle at Denver is interesting in that both teams look to be in turmoil; Mile High always tough though. Houston at New England is pretty clearly the game of the week. Deshaun Watson was ripping the league up last year before getting injured, but now he is back. The Tejans also have added Tyrann “Honeybadger” Matthieu to an already killer defense and have JJ watt back. The Pats, well, they have a couple of old geezers named Brady and Belichick. That has been enough usually. Discuss any and all other games, or anything else, at your leisure.

Crank it up, Trash is back from, and with, The Dead. Hat tip to Rosalind, who loves The Dead!