Both Roger Stone and the NYT have dueling stories out, both falling far short of what they need to tell us about a set of emails sent the first week of October 2016 between Breitbart editor Matthew Boyle, his former boss turned Trump campaign chair Steve Bannon, and Roger Stone.

Neither outlet shows the email addresses or tells us what domains Bannon and Stone were using (Boyle seems to have sent at least one of these emails from his Breitbart account). That’s a huge part of the story given that, earlier this week, Stone denied to the WaPo discussing WikiLeaks with Trump campaign officials.

“There are no such communications, and if Bannon says there are he would be dissembling,” he said.

Plus, if Bannon used a non-campaign address to communicate with Boyle and/or Stone, it would suggest an effort to distance his ties to the two from the official campaign business (and might suggest Mueller had to have gone through extra effort to obtain these emails).

The NYT doesn’t provide times for the emails it presents (which is especially problematic because it bolloxes the timing of Stone’s tweets, most notably by using the UTC time for them and therefore showing a tweet he sent late the night of October 1 as being sent on October 2). 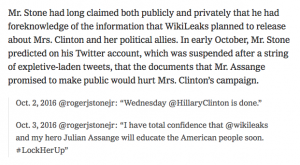 And while Stone at least provided the times of the emails he published, he somehow put London’s time zone behind the US (which I’ll treat as an editing error and note he was surely rushing to beat the NYT to press, which he did).

Assange held a press event Oct. 2 (Oct. 3 U.S. time) and did not release any documents that day as had been widely expected, Bannon e-mailed me asking why.

Plus, both ignore a key part of events of early October, the first reports that Mueller witness Jerome Corsi and Roger Stone wrote up from the Podesta emails leaked that week, which was based off a story that Bannon himself had originated. NYT’s accompanying story which details that Mueller has raised questions about Stone’s dark money funds, doesn’t address Stone’s Stop the Steal fund, which engaged in voter suppression, meaning Stone may be deliberately misdirecting again.

The organization bills itself as a nonprofit social welfare organization that has been designated by the Internal Revenue Service as a 501(c)(4) group. But there is no indication in I.R.S. records that it has that status.

Mr. Stone’s Oct. 4, 2016, email to Mr. Bannon suggested another reason prosecutors might be interested in the fund. Asking the campaign to promote his theory of an illegitimate son of Mr. Clinton, he wrote: “I’ve raised $150K for the targeted black digital campaign through a C-4,” he wrote.

“Tell Rebecca to send us some $$$,” Mr. Stone added, apparently referring to Rebekah Mercer, a wealthy Republican donor close to Mr. Bannon. There is no indication that Mr. Bannon replied to him or sought out Ms. Mercer, and it is unclear whether Mr. Stone’s solicitation, alone, violated federal election laws. Mr. Stone said he was referring to a campaign targeting African-American voters.

In short, the stories, sourced to Bannon and maybe Sam Nunberg on one side and Stone on the other, really don’t tell us what Mueller’s after here. But they do provide a bunch of shitholes an opportunity to explain away a suspicious exchange without addressing known issues with them.

What these stories do show is that on October 3 (it appears to be after Stone’s tweet claiming “total confidence” that Julian Assange would educate the American people soon) Boyle asked Stone what Assange had coming. “Hope it’s good.”

Stone used that opportunity to try to get to Bannon, by promising that Assange had something good while noting that Bannon “doesn’t call me back” (it’s unclear whether that was in that immediate time period or more generally). “I’ve got important stuff to worry about,” Bannon replied. But Boyle persisted, suggesting it was important for Bannon to know what Assange had coming.

That day, Bannon wrote Stone, “What was that this morning???” Stone explained it as a “Serious security concern,” which reflects what WikiLeaks was playing up in real time, partly exploiting a Hillary comment claimed by True Pundit about droning Assange.

And Stone said WikiLeaks would release something each week, which also parrots what Assange had said.

These competing stories may in fact be an attempt to explain away this email, which includes at least a reference to whether or not Assange had been bribed to stop by Clinton’s people, and a reference to Stone’s efforts to slur Clinton with an accusation of an illegitimate child. (Remember, in this period Michael Cohen was busy paying off a bunch of women to prevent them from going public with stories of their affairs with Trump.) 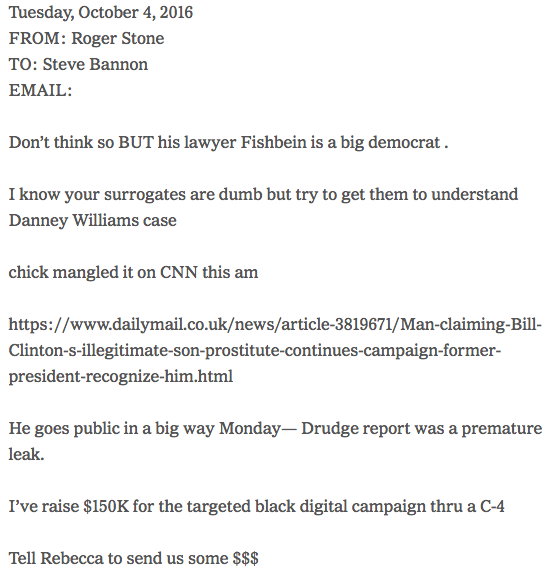 But that last bit — the “targeted black digital campaign” — is only explained by the NYT as either Stone’s Committee for American Sovereignty Education Fund (he also worked on a RAPE PAC with one of his dark money people, which had a similar goal), which is what Stone claimed it was, or to his PAC, Committee to Restore America’s Greatness.

The other big outlay Stone was making at the time was for his Stop the Steal voter suppression effort (largely via money raised through CRAG and not kept separate from the dark money group). When Stone got in trouble for those voter suppression efforts, Don McGahn helped bail him out, so whether or not the campaign planned to, they did ultimately associate with Stone’s efforts.

In other words, the most damning connotation of that request would pertain to voter suppression, not WikiLeaks.

I don’t know what to make of these emails, except to say that a bunch of shitholes are trying to tell stories about them that leave key holes in the story.

Could Roger Stone Be Charged in a CFAA Conspiracy? Confirmed: Listening to Whistleblower John Reidy Could Have Saved the Lives...