Impeachment and the Narcissist’s Off-Ramp 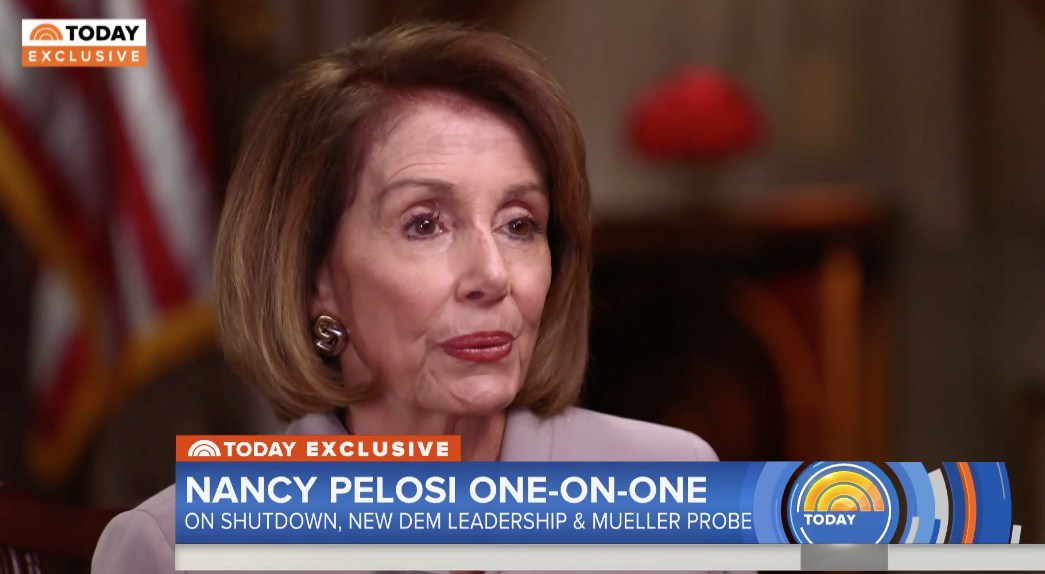 Welcome to the 116th Congress, where Democrats in the House will finally exert some check on the unmanageable man sitting the Oval Office.

There’s a lot I’m excited about in the new Congress: the unprecedented diversity, some rules and agreements that should give progressives more sway in the House, and a fierce, talented leader holding the Speaker’s gavel (even if I disagree with some of Nancy Pelosi’s moves, such as Pay-Go).

Pelosi is taking a really aggressive approach with Trump. In an interview on NBC this morning, Pelosi suggested he doesn’t know how to deal with women in power or women with strength. She dinged Trump because he “may not know this, but Hawaii is part of the United States,” and wondered whether Trump actually “observed the religious holiday of Christmas.” (Here’s the actual interview; I have yet to find a transcript.)

Remarkably, given the way Pelosi categorically ruled it out in 2006, she spoke at length about impeachment (partly, though not entirely, because Savannah Guthrie pushed her repeatedly on this point). After agreeing with her past comments that an impeachment would be “sad and divisive” to impeach the president, Pelosi suggested that the law does not prohibit indicting a sitting president.

Asked if Mueller could legally indict a sitting president, Pelosi said: “Let’s just see what Mueller does. Let’s spend our time on getting results for the American people.”

The Office of Legal Counsel’s guidance, issued in 2000, says, “The indictment or criminal prosecution of a sitting President would unconstitutionally undermine the capacity of the executive branch to perform its constitutionally assigned functions.”

“It’s not the law,” Pelosi told Guthrie. “Everything indicates that a president can be indicted after he is no longer president of the United States.”

Guthrie asked, “What about a sitting president?”

“Well, a sitting president when he is no longer president of the United States,” Pelosi answered.

Guthrie pressed again, asking, “A president who’s in office? Could Robert Mueller come back and say, ‘I am seeking an indictment?'”

She also did not rule out impeachment proceedings against Trump.

I’m totally okay with Pelosi making comments that will emasculate Trump in front of his base, particularly when it highlights his failed campaign promises, starting with his idiotic promise that Mexico would pay for his wall. I think making him appear as the weak coward he is is a necessary step to begin to chip away at unquestioning support among his supporters.

But I keep thinking back to something I raised in this post, where I pointed out that the increasing likelihood Trump Organization might be targeted by prosecutors might change Trump’s calculus as he tries to retain power.

If I’m right, there are a whole slew of implications, starting with the fact that (as I laid out on a Twitter rant this morning), it utterly changes the calculation Nixon faced as the walls started crumbling. Nixon could (and had the historical wisdom to) trade a pardon to avoid an impeachment fight; he didn’t save his presidency, but he salvaged his natural person. With Trump, a pardon won’t go far enough: he may well be facing the criminal indictment and possible financial ruin of his corporate person, and that would take a far different legal arrangement (such as a settlement or Deferred Prosecution Agreement) to salvage. Now throw in Trump’s narcissism, in which his own identity is inextricably linked to that of his brand. And, even beyond any difference in temperament between Nixon and Trump,  there’s no telling what he’d do if his corporate self were also cornered.

In other words, Trump might not be able to take the Nixon — resign for a pardon — deal, because that may not be enough to save his corporate personhood.

For virtually every other legal situation, it seems to me, existing in both natural and corporate form offers protection that can save both. But if you’re the President of the United States, simultaneously existing — and criminally conspiring — in corporate form may create all sorts of additional exposure any normal President would normally be protected from.

I think this is true not just of the presidency, though. I think it was almost immediately true of the Russian investigation, as exhibited by the emails KT McFarland sent from Mar-a-Lago as the Trump Transition responded to Obama’s sanctions on Russia.

There are many reasons that might explain why Trump responded to punishment of Russia the way he did: because he knew the Russians did have some role in his win, because he is a paranoid freak who always suspects an ulterior motive to hurt him.

Ultimately, though, it’s about his narcissism. Trump cannot admit any failures, any weakness. And admitting that he didn’t win the election fair and square would be like admitting that he had fewer inauguration visitors than Obama did.

Trump and the Russians were engaged in a call-and-response, a call-and-response that appears in the Papadopoulos plea and (as Lawfare notes) the GRU indictment, one that ultimately did deal dirt and got at least efforts to undermine US sanctions (to say nothing of the Syria effort that Trump was implementing less than 14 hours after polls closed, an effort that has been a key part of both Jared Kushner and Mike Flynn’s claims about the Russian interactions).

At each stage of this romance with Russia, Russia got a Trump flunkie (first, Papadopoulos) or Trump himself to publicly engage in the call-and-response. All of that led up to the point where, on July 16, 2018, after Rod Rosenstein loaded Trump up with a carefully crafted indictment showing Putin that Mueller knew certain things that Trump wouldn’t fully understand, Trump came out of a meeting with Putin looking like he had been thoroughly owned and stood before the entire world and spoke from Putin’s script in defiance of what the US intelligence community has said.

People are looking in the entirely wrong place for the kompromat that Putin has on Trump, and missing all the evidence of it right in front of their faces.

Vladimir Putin obtained receipts at each stage of this romance of Trump’s willing engagement in a conspiracy with Russians for help getting elected. Putin knows what each of those receipts mean. Mueller has provided hints, most obviously in that GRU indictment, that he knows what some of them are.

For example, on or about July 27, 2016, the Conspirators  attempted after hours to spearphish for the first time email accounts at a domain hosted by a third-party provider and used by Clinton’s personal office. At or around the same time, they also targeted seventy-six email addresses at the domain for the Clinton Campaign.

But Mueller’s not telling whether he has obtained the actual receipts.

And that’s the kompromat. Trump knows that if Mueller can present those receipts, he’s sunk, unless he so discredits the Mueller investigation before that time as to convince voters not to give Democrats a majority in Congress, and convince Congress not to oust him as the sell-out to the country those receipts show him to be. He also knows that, on the off-chance Mueller hasn’t figured this all out yet, Putin can at any time make those receipts plain. Therein lies Trump’s uncertainty: It’s not that he has any doubt what Putin has on him. It’s that he’s not sure which path before him — placating Putin, even if it provides more evidence he’s paying off his campaign debt, or trying to end the Mueller inquiry before repaying that campaign debt, at the risk of Putin losing patience with him — holds more risk.

Trump knows he’s screwed. He’s just not sure whether Putin or Mueller presents the bigger threat.

But ultimately there is one other factor that makes Trump more self-destructively defensive about this investigation than he otherwise would be: his narcissism.

And while I’d welcome his utter humiliation before the world stage, I also believe that any single-minded pursuit of that humiliation will only increase the likelihood he’ll dig in, regardless of the damage that doing so will do to the country.

Even if we do get to the point where indictment or impeachment became viable (and I’m not sure we will), it’s worth thinking about whether pursuing either one might just trigger a narcissistic response that will only lead Trump to do further damage to this country. If we provide Trump an off-ramp that allows him to preserve some of his destructive ego, it may do less damage to the country.

Update: Fixed Guthrie’s first name–apologies to her for the error. h/t jk

Sam Patten Reminds Us Cooperation Deals Are Not Cookie Cutters Prosecutors Cite Osiris in an Attempt to Resuscitate Dead Law against Marcus...