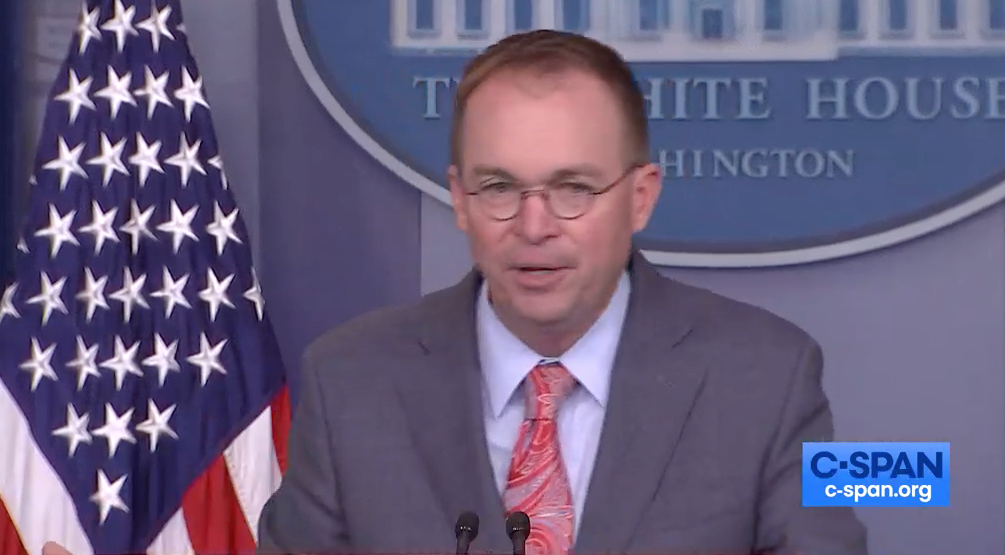 Amid the tsunami of alarming news Mick Mulvaney made at today’s press conference (Trump is holding the G-7 at Doral next year, he likely will invite Putin, Trump did engage in a quid pro quo with Volodymyr Zelensky on his July 25 call), one of the more important admissions got missed.

Mick Mulvaney admitted that the White House would have been breaking the law by withholding Ukrainian security funds because it did not have a “really really good reason not to do it.”

By the way, there was a report that we were worried that the money, that if we didn’t pay out the money it would be illegal. It would be unlawful. That is one of those things that has a little shred of truth in it, that makes it look a lot worse than it really is. We were concerned about — over at OMB, about an impoundment. And I know I’ve just put half you folks to bed, but there’s a, the Budget Control Act, Impound — the Budget Control Impoundment Act of 1974 says that if Congress appropriates money you have to spend it. At least, that’s how it’s interpreted by some folks. And we knew that that money either had to go out the door by the end of September, or we had to have a really really good reason not to do it. And that was the legality of the issue.

He’s referring, presumably, to a WSJ report that OMB — the agency Mulvaney is still officially in charge of — put a political appointee in charge of withholding duly appropriated security funds for Ukraine so that President Trump could extort concessions from Ukraine.

The White House gave a politically appointed official the authority to keep aid to Ukraine on hold after career budget staff members questioned the legality of delaying the funds, according to people familiar with the matter, a shift that House Democrats are probing in their impeachment inquiry.

President Trump’s order to freeze nearly $400 million in aid to Ukraine in mid-July is at the center of House Democratic efforts to investigate allegations that Mr. Trump used U.S. foreign policy powers to benefit himself politically.

The president has the authority to delay the release of money in certain instances, according to the Congressional Research Service, a nonpartisan research agency, including if there has been an unexpected change in circumstances for the program. But without being provided explanation or justification about why the administration was delaying the aid, some career officials at the Office of Management and Budget became worried they didn’t have the legal authority to hold up the funds, according to the people familiar.

While career civil servants put an initial hold on the aid, Michael Duffey, associate director of national security programs in OMB, was given the authority for continuing to keep the aid on hold after the career staff began raising their concerns to political officials at OMB, according to the people familiar with the matter. Mr. Duffey also began overseeing the process for approving and releasing funds, called apportionment, for other foreign aid and defense accounts, according to a public document indicating the change.

As noted by Mulvaney today, a law passed in the wake of Richard Nixon playing games with appropriations requires that if you withhold duly appropriated funds, you explain to Congress why you’re doing so, a decision that Congress then gets to veto simply by refusing to approve of the decision. The law makes it clear that the President can’t simply ignore the will of Congress on appropriations.

And yet, that’s what Trump did for the entirety of the summer.

Worse, in his press conference today, Mulvaney admitted that Trump didn’t have a “really really good reason not to” release the funds. Rather, he had a really bad reason: he was trying to extort a quid pro quo.

And that’s why the decision — reported in ho hum fashion on Tuesday as if it were just another case of the Administration refusing Congressional subpoenas — that OMB and DOD would not respond to subpoenas is actually really important.

As you are aware, the Impoundment Control Act of 1974 authorizes the President to withhold the obligation of funds only “(1) to provide for contingencies; (2) to achieve savings made possible by or through changes in requirements or greater efficiency of operations; or (3) as specifically provided by law.” The President is required to submit a special message to Congress with information about the proposed deferral of funds.

On August 30, 2019, Chairman Adam Smith and Ranking Member Mac Thornberry of the House Committee on Armed Services wrote a letter to Mr. Mulvaney requesting information why military assistance to Ukraine was being withheld and when it would be released. They wrote: “This funding is critical to the accomplishment of U.S. national security objectives in Europe.”

On September 3, 2019, a bipartisan group of Senators–including Rob Portman, Jeanne Shaheen, Dick Durbin, Richard Blumenthal, and Ron Johnson–wore a letter requesting that OMB release the military assistance to Ukraine that the Trump Administration was withholding:

The funds designated for the Ukraine Security Assistance Initiative are vital to the viability of the Ukrainian military. It has helped Ukraine develop the independent military capabilities and skills necessary to fend off the Kremlin’s continued onslaughts within its territory. In fact, Ukraine continues to fight daily on its eastern border against Russia-backed separatists in the provinces of Donetsk and Luhansk, and over 10,000 Ukrainian soldiers and civilians have lost their lives in this war. U.S.-funded security assistance has already helped turn the tide in this conflict, and it is necessary to ensure the protection of the sovereign territory of this young country, going forward.

On September 5, 2019, Chairman Eliot L. Engel and Ranking Member Michael McCaul of the House Committee on Foreign Affairs wrote a letter to OMB urging the Trump Administration to lift its hold on security funds to support Ukraine, writing: “These funds, which were appropriated by Congress as Foreign Military Financing and as part of the Ukraine Security Assistance Initiative and signed into law by the President, are essential to advancing U.S. national security interests.”

On September 24, 2019, Senate Majority Leader Mitch McConnell stated that, although he was “very actively involved in advocating the aid,” he “was not given an explanation” about why it was being withheld, even though he talked to the Secretary of Defense and the Secretary of State. He stated: “I have no idea what precipitated the delay.”

The enclosed subpoena demands documents that are necessary for the Committees to examine the sequences of these events and the reasons behind the White House’s decision to withhold critical military assistance to Ukraine that was appropriated by Congress to counter Russian aggression.

That’s the subpoena that Mulvaney’s agency and DOD (the latter, after initially saying it would cooperate) are defying. It’s a subpoena that goes to the zenith of Congress’ authority, whether it is issued within or outside of an impeachment inquiry. But within an impeachment inquiry, it illustrates that on one issue of fact at the core of the investigation, there is bipartisan agreement that the White House was in the wrong.

And today, Mulvaney admitted that the White House did not have a very very good reason to withhold those funds, even while confirming that Trump was withholding the funds, in part, to extort a quid pro quo.

Update: Jack Goldsmith did a review of this issue in Lawfare today, but before the Mulvaney comments.

Sorting Out The Timeline For Lev Parnas And Program Trading Corp. Surveillance Reform Can No Longer Ignore EO 12333