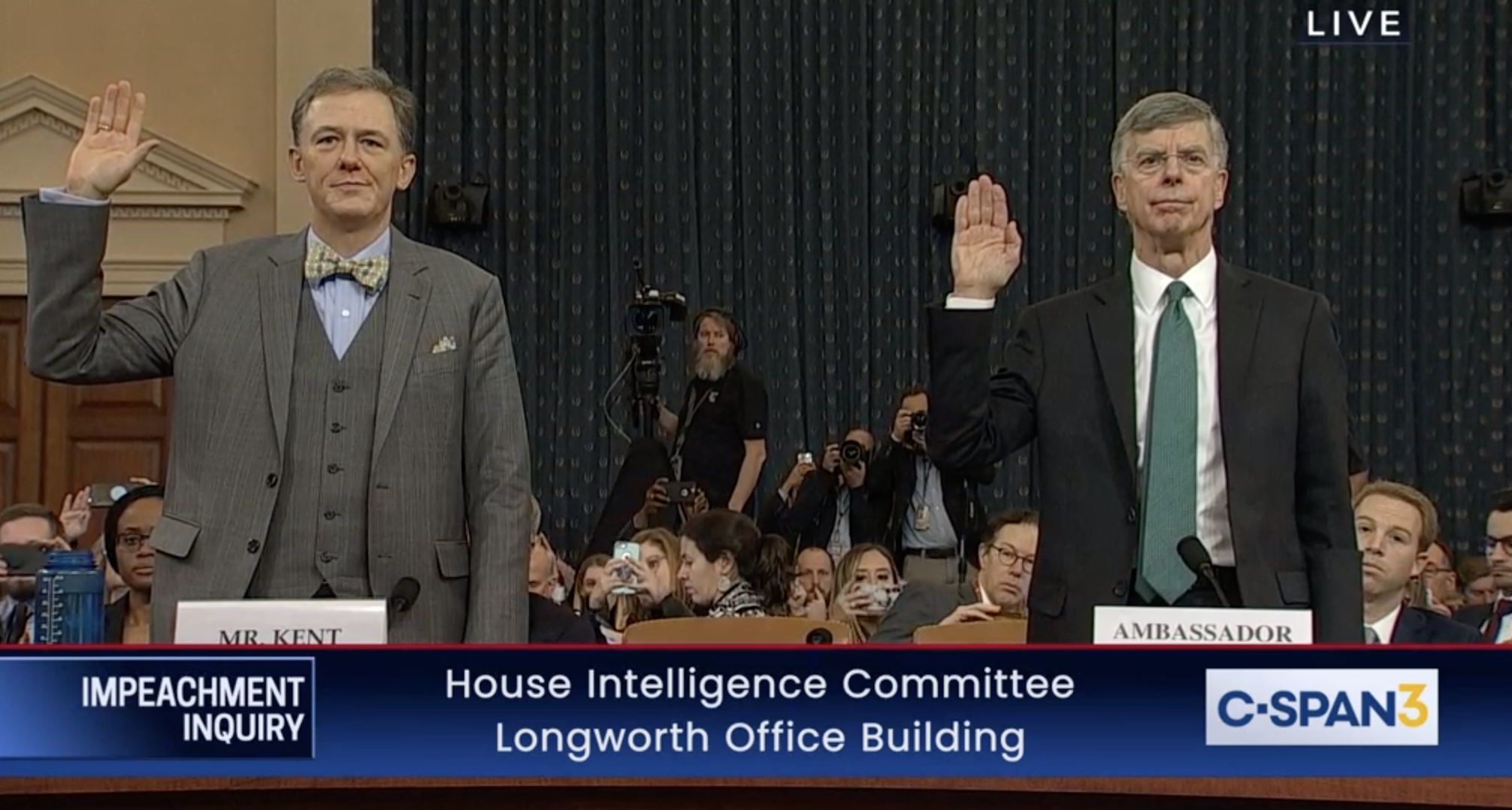 In her testimony Friday, Marie Yovanovitch repeatedly said that, if Trump believed that Burisma needed to be investigated, there were official channels to do so.

That’s a part of the impeachment inquiry that hasn’t received enough attention — but is likely to receive a lot more starting tomorrow, when Kurt Volker testifies.

That’s because his story seems to have a big gaping hole where Bruce Swartz, the Deputy Assistant Attorney General for International Affairs, should be.

As Trump’s people were pressuring Ukraine to open up an investigations for Trump, Andriy Yermak deferred by asking for an official request from the US government to open such an investigation. As an experienced diplomat, Kurt Volker proposed doing what should happen next, calling Bruce Swartz to put such investigations into formal channels. But according to him, this inexplicably never happened.

A Hi, did you connect with Andriy? Yeah.

Q And then what did You say?

A Not yet. Will talk with Bill and then call him later today. Want to know our status on asking them to investigate.

Q Okay. What did you mean by “our status on asking them to investigate”?

A Whether we had ever made an official request from the Department of Justice.

A Bruce Schwartz is a senior official in the Department of Justice responsible for international affairs, someone I’ve known for many years.

A I reached out to him and we did not connect.

Q So you never spoke with Bruce Schwartz (ph) ?

Q Not in this context?

A Not in this context and not since then.

Q Did you speak with anyone at DOJ about whether the U.S. had requested an official investigation?

A No, I did not. I did ask I did ask our Charge to also check. And I later understood that we never had. And because of that was another factor in my advising the Ukrainians then don’t put it in now.

Q You told the Ukrainians don’t put it in the specific investigation?

Q Did you speak with the Ukrainians about whether or not the U.S. had ever requested an official investigation?

A It came up in this conversation with Andriy about the statement, and he asked whether we ever had. I didn’t know the answer. That’s why I wanted to go back and find out. As I found out the answer that we had not, I said, well, let’s just not go there.

Q So Mr. Yermak wanted to know whether the U.S. DOJ

Q had ever made an official request?

Q And then Ambassador Sondland then asked: Do we still want Zelensky to give us an unequivocal draft with 2016 and Burisma?

Q And you responded how?

A I said: That’s the clear message so far.

Q That’s the clear message from whom?

A From Giuliani and what we had discussed with Gordon. That’s the clear message so far .

Q And, to your knowledge, there never was an official United States Department of Justice request?

A To my knowledge, there never was. And about this time, I stopped pursuing it as well, because I was becoming now here convinced this is going down the wrong road.

For his part, Bill Taylor opposed even calling Swartz, because it was so improper to ask Ukraine to investigate an American in the first place.

Q There was a reference to reaching out Department. You mentioned Deputy Assistant Attorney General, which I assume is Bruce Swartz.

Q Did you ask Ambassador Volker to reach out to Bruce Swartz?

A He volunteered to do that.

Q Okay. And what was the feedback from Swartz?

A I don’t know that they ever connected.

Q Okay. And was there any followup effort to close the loop with the Justice Department?

A No. I thought the whole thing was a bad idea.

Q You thought it was a bad idea to reach out to Bruce Swartz?

A No. I thought the idea of the Americans asking the Ukrainians to investigate a violation of Ukrainian law was a bad idea.

A But Kurt, for some reason, wanted to pursue that. And when he volunteered to take that question to Bruce Swartz, that was fine with me.

Q Okay. I mean, is it possible that Swartz’s feedback on that issue would have been compelling to the group? Like, why didn’t anyone fo1low up with Swartz?

State’s Special Adviser for Ukraine Catherine Croft, in attempt to distance herself from any role in pushing investigations, seems to have filled in a key detail here. Or perhaps created a huge void. She says she did reach out to Swartz. She doesn’t know whether he and Volker connected, but doesn’t think so.

But she thinks that Volker didn’t really want to talk to Swartz.

He wanted to speak with Bill Barr.

A No. No. I had no involvement in anything related to — the one exception is, I did send one email to Bruce Swartz at DOJ relaying Ambassador Volker’s request for a meeting with the Attorney General.

A And when asked what the topic was, I said 2016 elections.

A But that’s where my involvement in that ended. I just related that, and then I understood those two to be in contact.

Q Do you know if Ambassador Volker had tried to call Bruce Swartz?

A I believe he did.

Q And do you know if Bruce Swartz replied?

Q And he instructed you to email Bruce Swartz to see about the viability of Ambassador Volker meeting with the Attorney General?

A He just sort of gave me a vague direction to get him a meeting with the Attorney General, so that was my job.

Q Did you call Bruce Swartz?

Q Did he email you back?

A Yes. And then I put him in touch with Kurt and then I was out of the —

Q You put him in touch with who?

A With Ambassador Volker.

Q And did they having a meeting?

This should raise all sorts of questions. Because if Volker — by whatever means — bypassed Swartz and instead made the request of Barr, then it would make Barr (yet again) more central to this story. And it might explain how all his narrow denials (he never spoke to Ukraine directly, he never made a request of Ukraine directly, but nevertheless some Ukrainian “volunteers” bearing “evidence” did get to John Durham can be true.

Moreover, it would be consistent with what Barr was doing in the same time period, flying around the world asking foreign countries to invent dirt on Democrats.

There’s a reason this request never got to Bruce Swartz. And that goes to the core of the impropriety of this ask.

And there’s an enormous irony (or one might say, a hypocrisy) about this.

In short, a key complaint about Christopher Steele’s sharing of information is that the ways it got shared at DOJ include the experts and official channels who should handle such things.

Precisely the opposite has occurred with Bill Barr’s witch hunt. And yet none of the frothy right are complaining that Bill Barr’s investigation doesn’t meet the standards that Christopher Steele’s did.

The Trump-Mueller Answer the Stone Trial Really Implicates: Pardoning Assan... The Persistence of Jared in the WikiLeaks Operation