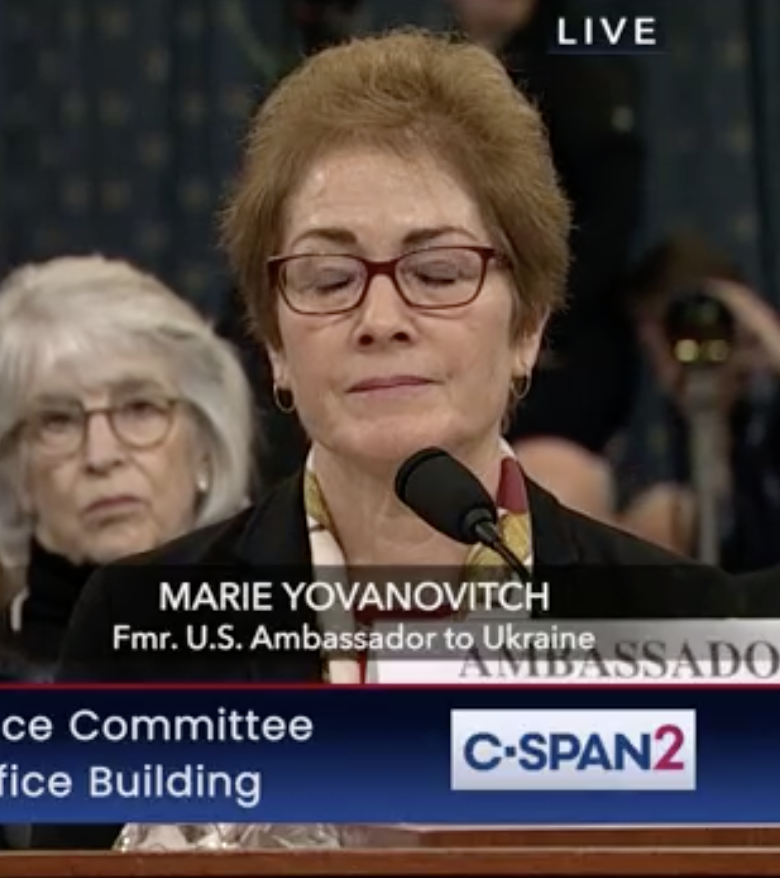 On it, he went further in his comments about Marie Yovanovitch than he did last night, when he apologized for being part of the attacks on her. Tonight, he said he came to hate her only because of the opinion of those around him.

Except that’s inconsistent with another detail he offered (one repeated in the part of the Maddow interview aired tonight) — that he knows of at least four attempts to fire Yovanovitch. The first, he explained, was when he was at an American First SuperPAC event and told Trump that Yovanovitch was bad-mouthing him, in response to which Trump turned to his aide John DeStefano and told him to fire her.

That incident was reported on last year.

The April 2018 dinner was designed to be an intimate affair, an opportunity for a handful of big donors to a super PAC allied with President Trump to personally interact with the president and his eldest son.

In an exclusive suite known as the Trump Townhouse at Trump’s Washington hotel, the group — including Jack Nicklaus III, the grandson of the famous golfer, and a New York developer — snapped photos, dined and chatted about their pet issues with the president for about 90 minutes.

Among those in attendance were two Florida business executives who had little history with Republican politics but had snagged a spot at the dinner with the promise of a major contribution to the America First super PAC. They turned the conversation to Ukraine, according to people familiar with the event, who spoke on the condition of anonymity to describe the private dinner.

One of the men, Lev Parnas, has described to associates that he and his business partner, Igor Fruman, told Trump at the dinner that they thought the U.S. ambassador to Ukraine was unfriendly to the president and his interests.

According to Parnas, the president reacted strongly to the news: Trump immediately suggested that then-Ambassador Marie ­Yovanovitch, who had been in the Foreign Service for 32 years and served under Democratic and Republican presidents, should be fired, people familiar with his account said.

Parnas was inciting Trump to fire Yovanovitch months and months before the effort picked up in earnest. That was before Rudy even started this project. That is, this incident is utterly inconsistent with Parnas’ claims to have adopted his malign opinion of Yovanovitch from those around him.

He was a leader, not a follower, on attacking Yovanovitch.

That said, Parnas’ effort to get Yovanovitch fired a year before she was ultimately fired may have had something to do with Trump. As I’ve noted, it coincides with the time when Paul Manafort’s fate started to go south.

When she asked Deputy Secretary of State John Sullivan why she had been withdrawn with almost no notice, he told her Trump had been pressuring State to do so since Summer 2018.

Finally, after being asked by the Department in early March to extend my tour until 2020, I was then abruptly told in late April to come back to Washington from Ukraine “on the next plane.” You will understandably want to ask why my posting ended so suddenly. I wanted to learn that too, and I tried to find out. I met with the Deputy Secretary of State, who informed me of the curtailment of my term. He said that the President had lost confidence in me and no longer wished me to serve as his ambassador. He added that there had been a concerted campaign against me, and that the Department had been under pressure from the President to remove me since the Summer of 2018. He also said that I had done nothing wrong and that this was not like other situations where he had recalled ambassadors for cause.

It is true that these events would have shortly followed the first efforts from Lev Parnas and Igor Fruman to cultivate Trump and his “free” lawyer, Rudy Giuliani, whom Trump “hired” (for free) in April.

At almost precisely that time, in April 2018, Ukraine stopped cooperating with Mueller on the Manafort prosecution, possibly in response to the approval of an export license for Javelin missiles, one of the same things Trump used again this summer to extort Ukraine.

Nevertheless, Trump’s efforts to fire Yovanovitch took place even while — in spite of Ukraine’s halt to their cooperation — things started going south for the President’s former campaign manager.

Parnas tried to downplay this last night, the degree to which — in addition to an attempt to attack Biden — this has always been an attempt to undermine Mueller. That’s probably because he can’t dismiss that as peer pressure, like he has with Yovanovitch. His efforts to undermine Mueller won’t endear him to Democrats. It would also raise questions about others who would want to undermine that investigation, particularly since he wasn’t working with Rudy yet.

But Parnas’ claims about Yovanovitch are fairly transparently false. He led. He did not follow. And the reasons why he did so probably conflict with the emphasis of this story — which he has currently placed precisely where it’ll be most enticing to Democrats — which is on Biden, not Mueller.