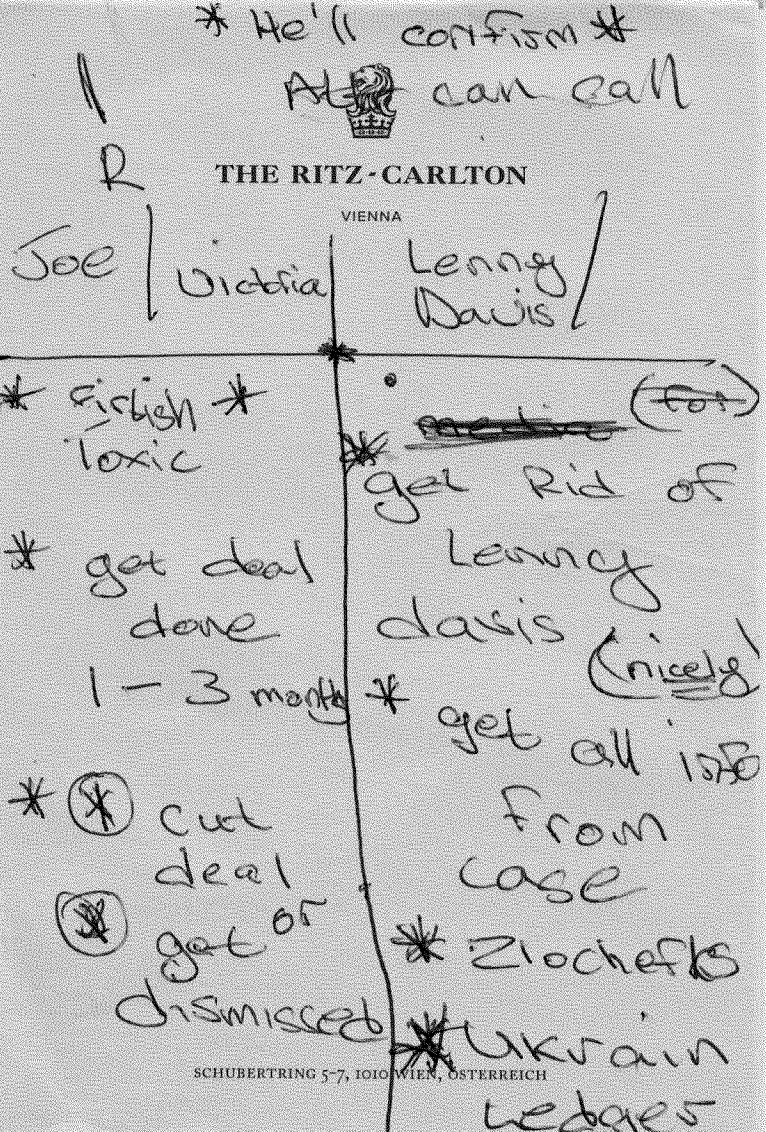 Last night, Lev Parnas provided details to Rachel Maddow about how he came to be represented, briefly, by John Dowd. It was Rudy’s idea, but when Dowd first raised the issue, Jay Sekulow (who appears to have recognized this would all blow up) sai 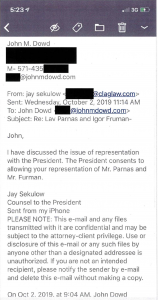 Per the email from Dowd reflecting the request to Sekulow that Parnas released, that happened on October 2.

At around the same time, there was a discussion about what to do about the subpoena from the House Intelligence Committee, which requested documents on September 30, to be due on October 7. As Parnas explained it, they met at Dowd’s house with Rudy and Sekulow, with Victoria Toensing on the phone. Because Parnas worked for Rudy and Toensing, Parnas explained, White House Counsel Pat Cipollone would write a letter to Congress asserting “three-way privilege.”

Only, Cipollone didn’t write that letter. John Dowd, who had attorney-client privilege at the time with Parnas, wrote it the day after Trump waived any conflict. This is the letter that I said, back in October, might one day end up in a museum.

I observed at the time that this seemed to be an effort to adopt the same strategy that had worked so well in the Mueller investigation — throw everyone into the same conflict-ridden Joint Defense Agreement, and sink or swim together.

Only, this time, it would entail also admitting one other key player into the Joint Defense Agreement: Dmitro Firtash, whom months earlier Rudy had affirmatively claimed was part of the Russian mob.

[W]hen Dowd wrote Congress, explaining that Rudy worked for both Trump and the Ukrainian grifters, and the Ukrainian grifters worked for DiGenova and Toensing, he was asserting that the President is a participant in an ethical thicket of legal representation with a mob-linked Ukrainian oligarch fighting extradition (for bribery) to the United States. And all of that, Dowd helpfully made clear, related to this Ukraine scandal (otherwise he could not have invoked privilege for it).

In other words, the President’s former lawyer asserted t 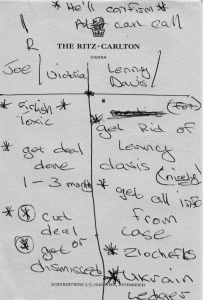 o Congress that the President and his current lawyer are in some kind of JDA from hell with the Russian mob, almost certainly along with the President’s former campaign manager, who apparently gets consulted (via Kevin Downing) on these matters in prison.

And that’s why the inclusion of Parnas’ hand-written notes from a June 2019 phone call with Rudy are so important. They show that Rudy had a plan to trade Firtash — the guy that Rudy claimed in March 2019 was part of the Russian mob — “magic” to “cut deal” or “get dismissed” his legal troubles in return for dirt on Burisma and claims that the “Ukrain ledger” was bogus.

Parnas even wrote notes showing they were going to hire Brian Ballard or Robert Stryk to do a PR campaign of the sort that Paul Manafort used to do.

Rudy might contest that’s what these notes — indeed, he denied any tie to Firtash, including through a Firtash associate Dmitry Torner, in an important story yesterday (though he did admit speaking to two of Firtash’s lawyers).

In a statement, Giuliani said he did not remember meeting Torner or details of his meetings in Paris and London and had limited interest in Firtash. “I never met him. I never did business with him,” he said of Firtash. He did not respond to follow-up questions after The Post obtained photos of the Paris gathering.

In a statement this week, Giuliani said he spoke with a Chicago-based attorney who is handling Firtash’s federal case to see if he had “evidence of corruption in Ukraine in 2016” to bolster his defense of Trump.

“I asked some questions about him because I thought he might have some relevant information,” Giuliani told The Post. “I determined that he didn’t.”

He said that Parnas urged him to keep reaching out to Firtash associates, but that he rejected the idea because he did not believe the tycoon had any pertinent information.

But Bondy, who has been urging Congress to call his client as a witness, said Parnas would be prepared to describe Giuliani’s outreach to Firtash.

“If called upon to testify, Mr. Parnas would say that Mr. Giuliani never rejected efforts to establish a line of communication with Mr. Firtash, and that, to the contrary, he did everything possible to secure that channel,” Bondy said.

But, as I said in October, the president’s former lawyer is already on the record in a statement to Congress under penalty of false statements that Parnas worked for both the president (via his current lawyer) and Toensing and DiGenova.

It has been clear since October that something like those notes Parnas released would be forthcoming. And because the government arrested Parnas, there’ll be a damned good chain of custody on the notes, proving he didn’t make them more recently to get out of legal trouble.

Trump’s legal advisors all entered into an insane joint defense agreement in October to try to keep Parnas (and Fruman) quiet. It seems Parnas quickly realized, when Dowd started giving him orders in jail, that he was going to be the fall guy for all their shady dealings, Rudy’s shady dealings, done on behalf of the President.

Lev Parnas’ Claims to Be Following the Opinion of His Clique on Yovanovitch... It Was All [Fruman’s] Contacts in Ukraine