When Bill Barr suddenly replaced DC US Attorney Jessie Liu the day after the Senate acquitted Trump, I grew wary of why he replaced a solid Trump appointee with his own close aide, Timothy Shea.

I fully expect the move was designed to minimize the damage of ongoing investigations into Trump’s flunkies and may well be an effort to prosecute more of Trump’s perceived enemies, like Andrew McCabe.

But in one of the first signals of whether Shea will interfere in sensitive prosecutions, the ongoing sentencing of Mike Flynn, Shea signed off on an aggressive next step.

That’s one of the key takeaways from two filings submitted today, the first asking for an order finding that Flynn has waived all attorney-client privilege with respect to Covington & Burling’s representation of him (including with those who worked on Flynn’s behalf, which might include researchers and tech contractors) in regards to his motion to withdraw his guilty plea, and the second asking for a continuance — possibly a significant one — to work with Covington to obtain information and materials to respond to Mike Flynn’s claims that Covington provided incompetent advice to him. 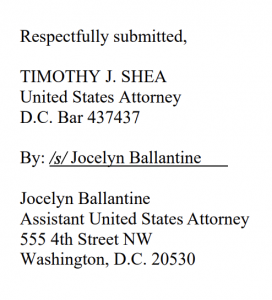 Bill Barr’s close associate Shea signed off on this, but Brandon Van Grack did not, which likely means that the government is preparing for the possibility (invited by Judge Emmet Sullivan’s suggestion he wants to hold an evidentiary hearing with sworn witnesses) that Van Grack will testify about discussions with Flynn and his lawyers, too.

That is, we may be headed towards a hearing in which we see top Covington lawyers, their contractors (I suspect their tech contractors have an interesting story to tell about how Flynn Intelligence Group materials were made unavailable after the 2016 election, thereby making key documents unavailable for Covington to review before completing the FARA filing), the other lawyer they advised he consult after first making sure he did not have a conflict, and Van Grack testify about how much lying and obstruction Flynn engaged in, with just Flynn and his wife (having probably already waived spousal privilege by submitting a declaration in this matter) arguing to the contrary.

Another takeaway is that Covington wants this opportunity to tell what a shitty client Flynn was.

While Covington has indicated a willingness to comply with this request, it has understandably declined to do so in the absence of a Court order confirming the waiver of attorney-client privilege.

They just want the legal and ethical cover of an order from Judge Sullivan. The government is asking for over a week extension from the existing deadline — currently noon on this Wednesday, February 12 — before they propose to submit a status report at noon on Thursday, February 20. That suggests they imagine, having consulted with Covington, that there may be a good deal to talk about, with regards to what a shitty client Mike Flynn was.

A subtle point about this request: I believe that the government is asking for this, and justifying it, based off Flynn’s complaint not just that his Covington lawyers should have gotten the details about FARA correct, and having not done so had an unwaivable conflict in representing Flynn going forward, but also that they allegedly did not tell Flynn that the FBI agents who originally interviewed him believed that he had a “sure demeanor,” which would have led him not to plead guilty had he been told.

the defendant contends that (1) his attorneys did not disclose to him that the interviewing agents believed he had a “sure demeanor” and that he did not show signs of deception, and he would not have pleaded guilty if his attorneys had disclosed this to him

This is significant because in the Bijan Kian case, Judge Anthony Trenga ruled that Covington’s work on the FARA application was not covered by privilege.

I believe that means that the already substantial evidence submitted in the context of that case, including notes and testimony clearly showing that Flynn lied to Covington lawyers as they were preparing the FARA filing, can be entered into this proceeding.

What the government is asking for, then, is that Covington’s attorney-client obligations to Flynn be waived on the case in chief here, his lies about Russia. Indeed, that’s what the bulk of the conflicting sworn Flynn statements laid out in the government filing pertain to.

On December 1, 2017, the defendant entered a plea of guilty to “willfully and knowingly” making material false statements to the FBI on January 24, 2017, regarding his contacts with the Russian Ambassador. See Information; SOF at ¶¶ 3-4.1 In addition, in the Statement of the Offense, the defendant admitted that he “made material false statements and omissions” in multiple documents that he filed on March 7, 2017, with the Department of Justice pursuant to FARA, which pertained to a project for the principal benefit of the Republic of Turkey. See SOF at ¶ 5.

Defendant Flynn was originally scheduled to be sentenced on December 18, 2018. Prior to that hearing, the government submitted a sentencing memorandum that described defendant Flynn’s knowing and willful material false statements to the FBI, and his material false statements and omissions in multiple FARA filings. See Gov’t Sent’g Memo at 2-5. In his own filing, the defendant reiterated that he “d[id] not take issue” with the government’s description of his conduct. See Def. Sent’g Mem at 7 (citing Gov’t Sent’g Memo at 2-5).

As I noted, Flynn’s sworn statements in this preceding are in unreconcilable conflict, both as regards to FARA and as regards to his claim to have lied to the FBI about his conversations with Sergei Kislyak and his more recent claim that he did not lie. But by getting Covington a waiver to talk about the latter, the government intends to get abundant evidence to prove that’s true of both sets unreconcilable conflicting sworn statements, the ones about his work for Turkey and the ones about lying to the FBI about Russia.

And they make it clear they may charge Flynn with perjury once they do that, because they want Sullivan to approve that use in his order.

The order also should make clear that if the defendant’s Supplemental Motion to Withdraw his Plea of Guilty is granted, the Court may consider additional questions of the limitation on the use of this information in any subsequent trial. This limitation on the use of information should not, however, preclude the government from prosecuting the defendant for perjury if any information that he provided to counsel were proof of perjury in this proceeding.

If Sullivan approves this (and he seems to be thinking along the same lines), it means either Flynn’s motion to withdraw will be refused after Covington provides the court with additional evidence of perjury, or it will be approved after Covington provides the government with additional evidence of perjury, which the government — including the newly appointed US Attorney for DC — would then use to prosecute Flynn for perjury.

Flynn’s lawyers — who, remember, decided to risk their client’s freedom on a claim that Covington lawyers were incompetent — seem uninterested in letting the government prepare for a hearing the judge in this case has made fairly clear he intends to hold.

The government conferred by e-mail with counsel for the defendant. In response to the government’s request to amend the briefing schedule in this case, defense counsel wrote: “Our position is that at the minimum, the Department of Justice should agree to withdrawal of the plea. Accordingly, we oppose any further extension of the briefing schedule.”

But even if Sullivan denies this motion, even if Sullivan doesn’t sign the order giving Covington the cover to explain how much Flynn lied to them, the government still has adequate time to prove their case by the existing deadline on Wednesday.

It was clear going back to the early January submission of the sentencing memorandum that Flynn’s case is being very carefully reviewed by the DOJ hierarchy. That’s unlikely to have changed with the changeover in US Attorney. Which suggests that whatever else Barr’s appointment of Timothy Shea means, it likely also means that DOJ institutionally supports this aggressive response to Flynn’s gamesmanship on his guilty plea.

Update: I’m increasingly baffled by all of this, but I think this may be Sidney Powell blinking. She agrees to the continuance claiming (without explaining that she has consulted with the government) that the basis for the government’s request has changed since they emailed and asked whether they were cool with a week-long delay.

Both the relief requested and the reasons underlying the government’s Motion to Amend have changed since it conferred with the defense earlier last week. Given the government’s Motion to Confirm Waiver, which raises issues the government did not mention previously, Michael T. Flynn (“Mr. Flynn”) does not oppose the Court granting a stay of the briefing schedule with a status report due from the parties by February 20, 2020. However, it is imperative that Mr. Flynn have time to brief the issues raised by the government’s new motion regarding the attorney-client privilege.

All this time, Sullivan has been unusually quiet.

Update: Maybe I’m missing Flynn’s response. On second thought, I think they’re claiming (who knows if it’s true) that last week the government asked for an extension for one reason, and now they’re asking for another. Which would make the inclusion of Shea on this all the more interesting, if it is true, which it’s probably not.