We Don’t Do That 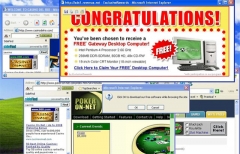 Go read this article by David Roth at the Columbia Journalism Review, it is brutally true. Here is a taste, but do read the whole thing:

It all happened in the way that decline generally happens in American culture, which is one anxious, hopeful, cynical capitulation at a time. We have compressed and corroded and finally collapsed what used to be the core of a publication—its relationship with its readers, and the basic notion that one should not make it hard for them to read.

It goes without saying that everyone involved is perpetually maxed-out and stressed and scrabbling for a dwindling and finite amount of money in an arbitrary and artificially constricted ad economy that runs on wobbly, untrustable, and easily manipulated data. (A friend who works in advertising operations described the work as “a game of catching falling knives.”)

In the last half-decade, ads have rapidly migrated from the sides and top of the page into the actual text. This is the result of pressures created by the transition from desktop computers to mobile devices. The ads need to get seen on a screen with no margins.

The ads that stalk you down the page reflect advertisers’ demands that their ads remain “in view.” And all the clammy unbidden video stuff is exactly as desperate as it looks. Not many people will watch video ads if given any choice in the matter. Taking choice out of the equation helps a lot.

Some sites have deliberately made the experience of reading them for free more assaultive, in order to bully readers into buying subscriptions. For the price of a small monthly indulgence on your end, it can all go back to normal and your laptop’s fan can finally turn off.

And then take a look at the site/forum you are currently reading on, Emptywheel. There is no infinite scroll. There are no ads, pop up or otherwise. There is nothing but…..content. And it is free. If you have a few extra shekels or rubles, consider throwing them Marcy’s way (there are all kinds of links for this on the right margin). It helps. And thank you to all who come here.

Questioning Bill Barr’s “No Collusion” Propaganda, Reggie... Mueller Told Trump He Was Being Investigated for Hacking, Wire Fraud, and Mail...