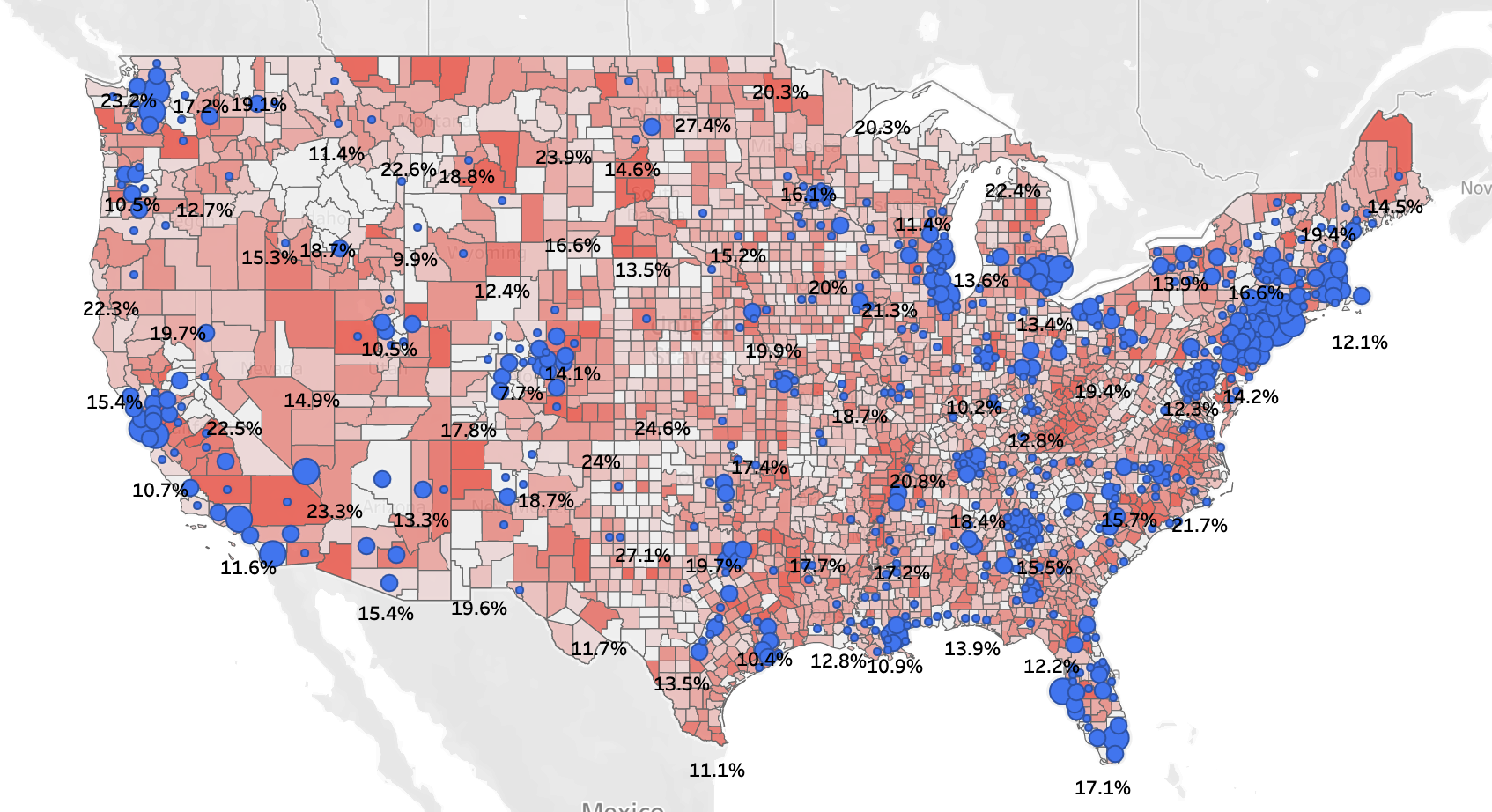 CNBC posted a list of the highest COVID rates per 10,000. In general, it includes two kinds of places: metro areas (NYC and environs, New Orleans, and Detroit), and ski resorts (the counties where Sun Valley, Crested Butte, Park City, Vail and Beaver Creek, and Aspen are).

There are two exceptions to that rule (though I expect Otsego County, MI may soon be on the list, based on a cluster I don’t yet understand): Dougherty County, GA, which I noted in this thread. That’s an outbreak tied to two funerals, especially that of Andrew Mitchell.

The service was for 64-year-old Andrew J. Mitchell, an Albany native who worked in custodial services and who died from what his family believes was heart failure. Mitchell came from a large family, and on Feb. 28 as many as 100 people came by the funeral home for visitation. The next day, seven of his siblings attended the funeral, along with dozens of his nieces, nephews, cousins and their own families. Some guests traveled in from as far away as Louisiana, Washington, D.C., and Hawaii. They greeted each other with tight handshakes, long embraces and kisses.

“The minister, he was shaking pretty much everybody’s hand, just giving the family comfort and condolences,” Mitchell’s niece Chiquita Coleman said. “The funeral home officiants, they were kind of doing the same thing. That’s kind of their job, to give comfort. So there was a lot of touching and hugging and hand-shaking.”

Afterward, chapel workers at the exit handed out memory cards. Later, there was a repast at Mitchell’s house and a gathering at the home of a sister.

The other is Cleburne County, Arkansas, a county of just 25,000 people. That cluster is tied to a 3-day event at a local church.

Nearly three dozen cases of covid-19 have been diagnosed in people who share a connection to a church in Cleburne County, while others at the approximately 80-member congregation have been tested and are awaiting results.

“It appears, from what I know at this time, most of the cases that we have in our county” are related to the Greers Ferry church, said Jerry Holmes, county judge of Cleburne County, who restricted public access to county offices last week and shut off access completely as of Monday.

Shipp’s count of 34 people is an updated count after reaching out to church members Sunday evening to check on them. Before then, Mark Palenske, the church’s pastor, had said in a Facebook post on the church’s official website Sunday that 26 people linked to the church had tested positive, including himself and his wife, Dena. The Palenskes could not be reached for this article.

Shipp said all but three of the people at the Kids Crusade were members or staff at the church. The three nonmembers who later tested positive for the virus were Thomas and Angela Carpenter, missionaries who had brought the three-day program to the church, and a child.

The Carpenters are listed as missionaries for Word of Grace Assembly of God Church in Hope on its website, and could not be reached at the church Monday.

The county has just one hospital and it has no ICU beds. And Arkansas is one of the states that has done least in response to this crisis, which makes it likely the disease will continue to spread from this one cluster.

Tourists, visiting missionaries, grieving friends and relatives of a long-standing community member. These are the ties that link rural communities across the country to a global network of virus. While many people in these rural towns believe they’re a world away from the outbreak in NYC, and therefore have to take none of the drastic measures to stop the spread, these same rural communities are even less prepared with the aftermath. Not only don’t their local healthcare facilities have the resources to treat this disease, but residents are more likely to be older, in ill health, and lack health insurance.

Update: The same kind of event — a church event — seems to behind a cluster of cases on the Navajo Nation.

A church gathering here earlier this month may be linked to a dozen confirmed cases of coronavirus and at least two deaths.

The participants in the large gathering that congregated March 7 at the Chilchinbeto Church of the Nazarene Zone Rally — a meeting in which pastors deliver messages to their members — may have all been exposed to coronavirus by at least one person who later tested positive for the disease.

Several people who attended the rally or who had family members who did later tested positive for the virus.

Before they could be tested, two people — one in LeChee, Arizona, and one in Chilchinbeto — died of respiratory symptoms, according to local sources.

Confirmed cases of COVID-19, the disease caused by the coronavirus, in the Navajo Nation on Tuesday evening rose to 49 from 26 late Saturday. Cases include 30 from Navajo County, seven in Apache County, six in Coconino County, four in McKinley County, and two in New Mexico’s San Juan County.

Most of the 30 coronavirus cases from Navajo County are tied to the zone rally, where one pastor was coughing as he gave a sermon, according to sources.

The rally ran concurrently with a “Day of Prayer” event at the Chilchinbeto Chapter House where chapter officials and some members of the church had a prayer service in response to the coronavirus outbreak. Everyone — pastors and members of all churches — were invited to the prayer service.

The LAT has an article about how poor communication and limited resources (including no running water in some cases) add to the challenges of a poor population with little access to medical care.