The comment has elicited justifiable uproar. It renewed questions about how long Trump’s medical experts, Anthony Fauci and Deborah Birx, can remain on stage while he touts junk cures (this video capturing Birx’s response is painful). It sparked a fascinating thread from former Special Envoy on ISIS, Brett McGurk, explaining how Trump’s instability makes it impossible to credibly advise him:

It generated a lot of attention on Trump’s outrageous comments and as a result shifted attention away from the fact that we’ve probably surpassed 50,000 deaths (though not in official counts, yet) and that Trump explicitly disagreed —  “I don’t agree with him” — with Fauci’s earlier comments that we’re not where we need to be on testing.

But it also elicited both sides reporting.

WaPo did a piece that called Trump’s suggestions as “medical musings,” put his suggestions high up in the story labeled as “bizarre,” like a nifty circus act, then called ingesting Lysol as only “potentially” dangerous. 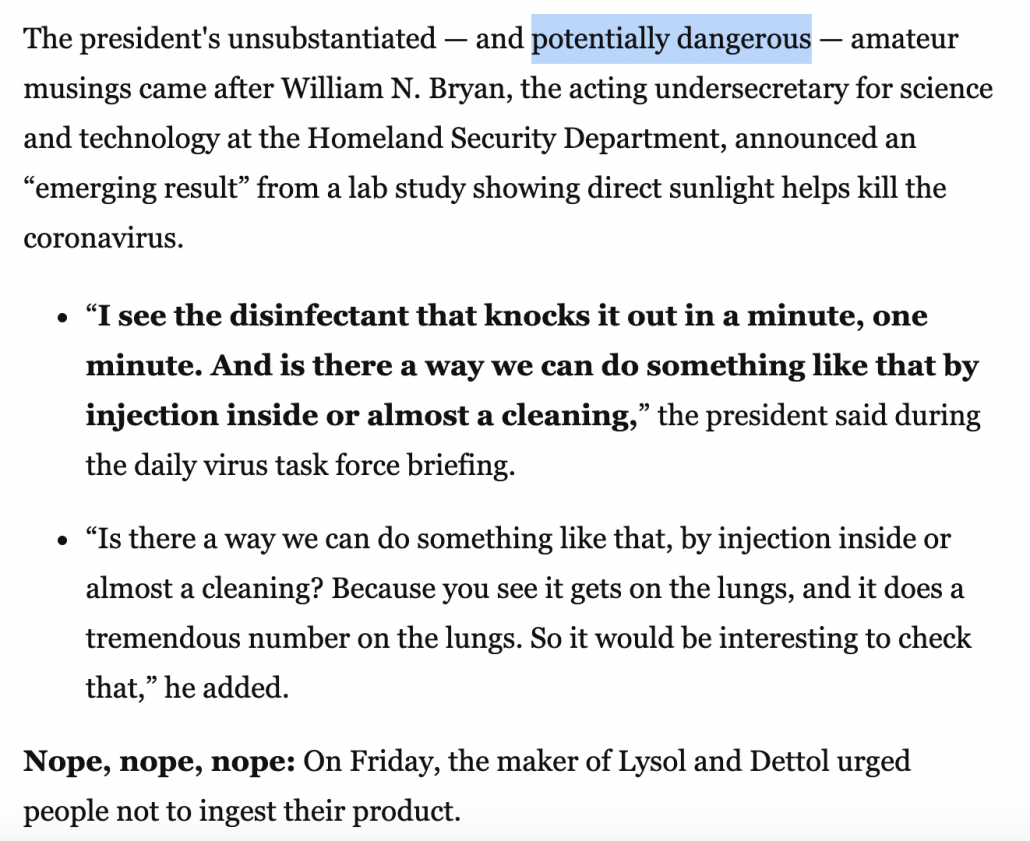 It went on to air the FDA Commissioner, Stephen Hahn’s sycophantic excuse for Trump’s comments — just a conversation between an idiotic patient and his doctor, not the most powerful leader of the world seeding hoaxes on live TV — without noting that by apologizing for his boss, Hahn himself was refusing to do his job to keep us safe.

WaPo isn’t the only one, though. NYT (by-lined by one of the journalists responsible for Mobile Bioweapons Labs in Iraq), too, treated the disinfectant and related UV ray questions as a matter pitting experts against the President.

President Trump has long pinned his hopes on the powers of sunlight to defeat the Covid-19 virus. On Thursday, he returned to that theme at the daily White House coronavirus briefing, bringing in a top administration scientist to back up his assertions and eagerly theorizing — dangerously, in the view of some experts — about the powers of sunlight, ultraviolet light and household disinfectants to kill the coronavirus.

Experts have long warned that ultraviolet lamps can harm humans if used improperly — when the exposure is outside the body, much less inside. But bottles of bleach and other disinfectants carry sharp warnings of ingestion dangers. The disinfectants can kill not only microbes but humans.

NBC, too, pitched this as a dispute between Lysol and their own health expert, Vin Gupta, versus Trump.

We don’t actually need to call Lysol (which is undoubtedly panicked that liability claims will undermine an otherwise welcome spike in sales) or consult experts about whether drinking disinfectant will hurt us. It’s something we learned as small children. The fact that outlets are treating this as a both sides issue is all the more troubling given that Trump’s statement clearly misrepresented what Acting DHS Undersecretary for Science and Technology William Bryan said in the briefing, which addressed how to kill the virus outside of the human body, not inside it. That is, outlets could cover the statements by describing them as a matter of Trump totally misunderstanding what he just heard — which is, itself, newsworthy — rather than presenting the efficacy of drinking poison as a matter open to debate.

What yesterday’s comments did — on top of indicate just how unhinged the President is getting as he realizes you can’t cheat your way out of a pandemic — is illustrate once and for all that, five years into covering Donald Trump as a national politician, some journalists still haven’t learned how to avoid being complicit in Trump’s dis- and misinformation. It may well show that not just Hannity, but even some in the so-called objective press, will own some responsibility for the idiotic choices that Americans make after listening to Trump. It certainly shows that it is high time for the press to treat the President’s ramblings as a problem unto themselves, not as anything conveying actual information.

VOA Africa correspondent Jason Patinkin made this point presciently in a long thread the other day by comparing how Ebola got covered — by journalists in the Democratic Republic of Congo and internationally — with how COVID-19 is getting covered now. He asked,

Anyways, did media (DRC and intl) covering outbreak coddle conspiracy theorists with both sides-ism, and give nonstop coverage to people encouraging such theories? Did they breathlessly report unproven cures and vaccines? Did they gently describe armed groups as “protesters”?

He noted that presenting “verified, critical information” means that, yes, journalists will and should default to taking the side of public health.

But doing so now may make journalists complicit in getting people killed.

Update: This NBC report explains why Trump was pushing these particularly miracle cures.

Update: NYT has slightly updated its story (though not entirely eliminating the both-sidesing), and deleted their especially bad both-sides tweet on it. Trump, meanwhile, claims that he was being sarcastic, a claim that conflicts with what his spox said earlier today, a claim that even Fox’s Bret Baier has debunked.