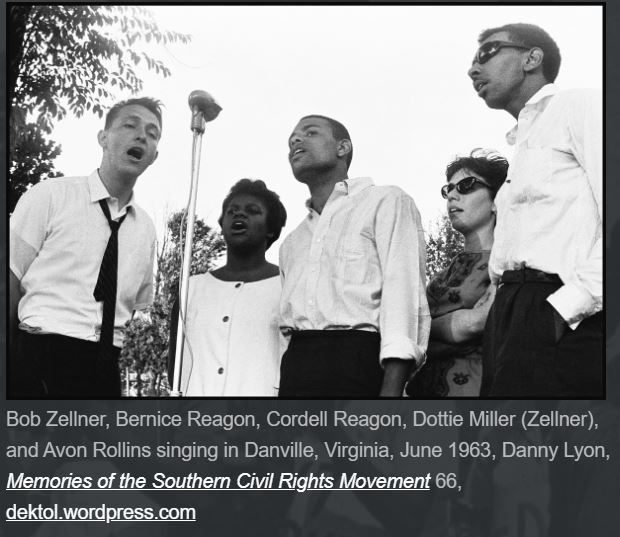 Marcy has touched on, and revisited today, the awful toll that COVID-19 is exacting on Albany, Georgia. An early in-depth look by the Atlanta Journal Constitution into how the outbreak started there showed us a very closely-knit community that has a deep history in the civil rights movement. Another very touching peek inside the community came yesterday from USA Today and really got to me, as it hit on what I saw as an echo of the complicated history of the Albany Movement.

The USA Today article goes into detail on how the Albany community refuses to “reopen” as Brian Kemp would have them do. Leaders of the community are coming together on their own to declare that they will only reopen when local health officials pronounce it safe to do so, and that point is still off in the future:

With so much loss, the idea of resuming normal life in Albany and risking a deadly second spike in cases is unthinkable. Town officials, business owners and church pastors are collectively rejecting Gov. Brian Kemp’s decision to allow certain businesses to reopen and lift a shelter-in-place order.

The people here say they will decide when their community can go out to dinner again, get a haircut at a local barbershop and worship together at church on Sunday.

And they are not ready yet.

To make the losses in Albany personal, the article opens with a focus on Elaine Williams, who lost her 38 year old son to the virus in early April. Near the end of the article, we return to Elaine Williams and her son, Kenya. They reproduced this photo she provided: 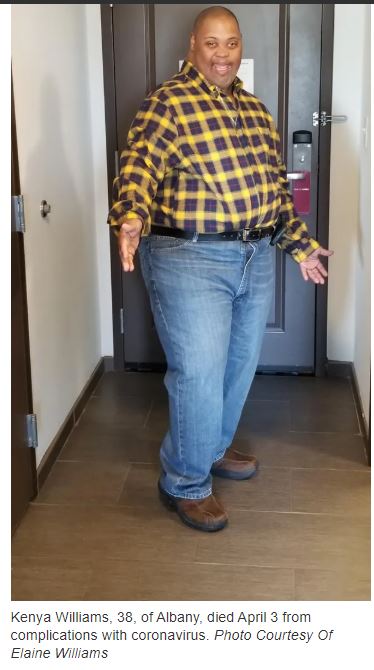 Here’s their description of how the loss has affected Ms. Williams:

Williams, meanwhile, is urging her neighbors to stay home so others are spared the pain she has endured losing her son.

Williams still doesn’t know how Kenya, who was born with Down syndrome, contracted the coronavirus. The only public place they visited in Albany was Sam’s Club on March 12.

She misses his forehead kisses, his gentle voice calling her “my dear” and the sound of him singing in his bedroom while blaring Frankie Beverly & Maze songs.

You see, singing and Albany have a deep history. You might recall that I had the opportunity back in February to join a group of people from here in Gainesville on a bus trip to important civil rights sites and museums in Montgomery and Selma, Alabama. As preparation for the trip, I started reading Hands on the Freedom Plow, which is a wonderful compilation of over 60 essays written by women who were part of the Student Non-violent Coordinating Committee (SNCC) on the roles they played as the civil rights movement unfolded in the South in the early 60’s. The essays are grouped into sections covering different aspects of the overall movement. The stories from the women on the front lines of the Albany Movement are among the most gut-wrenching in the book (which I’m still reading–it’s very long and takes time to process).

I will confess that I had not been aware of the Albany Movement and how it was one of the earliest sustained programs of mass demonstrations in the South and brought SNCC and Rev. Dr. Martin Luther King, Jr,’s Southern Christian Leadership Conference  (SCLC) together for the first time. Most “official” histories of the Albany Movement refer to it as a failure (see for example, here) since the demonstrations were halted without the local police and others instituting the reforms the demonstrators wanted. The “failure” was ascribed fairly often to infighting over power and funding between SNCC and SCLC, but my impression after reading the essays gave me more of a feeling that the people of Albany realized that the extreme physical and sexual brutality inflicted by those in power were not likely to end without structural change on a more national than local level. The Stanford history linked here does admit that the lessons learned in Albany were put to good use in the next movement in Birmingham and eventually in Selma, so the “failure” characterization isn’t really justified.

But there’s more. Although most of those who provided essays to the book only have one appear, one of the early organizers in Albany has two separate essays. Bernice Johnson Reagon played a dual role in Albany. She was a student at Albany State when demonstrations began breaking out on campuses in 1960 and she played a major role in getting demonstrations started in Albany in December of 1961. As the movement progressed, she found herself leading a key aspect of the gatherings: group songs. Her essay that focuses on the musical side of her work opens with the lyrics to “Since I Laid My Burden Down”, which she sings here in a 1986 recording:

Here is what she had to say about the song:

The Albany Movement conquered my fear of going to jail, and the songs helped to do that. They allowed us to name the people who were using jail against us, like Mayor Asa Kelley and Chief of Police Laurie Pritchett.  Not only could we call their names and say what we wanted to say, but also they could not stop our sound. Sometimes the police would say, “Stop the singing.” And we would know we were being heard, and we would just sing louder and longer. “I feel better, so much better since I laid my burden down” expressed what I felt like inside the Albany jail cell. There was a clarity about everything. I knew where I was; I knew what I was doing.  I did not like being locked up, and it was not easy. It was where I was supposed to be. My life was being used for a purpose–fighting racism–and it lifted me up to find that I could take a stand and make clear what I thought about the way we were treated in this country and in my hometown. My body was locked in jail, but I was free and centered.

The parallels between 1961 and 2020 in Albany are striking. The citizens of Albany took a stand for what is right in 1961 and were locked up for it. They realized that this suffering while locked up would help everyone in the struggle for civil rights. Today, the citizens of Albany are once again organizing and this time they’re locking themselves up. Just like before though, this round of being locked up is being undertaken with the knowledge that it is for the good of their community and their country.

But the music didn’t stop. Bernice Johnson Reagon was one of the four founders in Albany of the Freedom Singers. Even after the Albany Movement was over, the Freedom Singers went on tour raising money for SNCC. Here’s a 1963 recording that uses as a backdrop a photo of founders Bob Zellner, Bernice Johnson Reagon, Cordell Reagon, Dottie Miller (Zellner), and Avon Rollins:

And here they are singing at the March on Washington in August of 1963:

Oh, and Bernice didn’t stop there. She later founded “Sweet Honey in the Rock” and she is the performer of “Keep Your Eyes on the Prize” in the theme music for the PBS civil rights documentary series “Eyes on the Prize“.

Keyna Williams’ voice is now missing from the choir of Albany, but its rich tradition carries on and has made a lasting contribution to civil rights in our country. Now, the citizens of Albany are stepping up once again to lift their voices and dedicate their lives to making a more healthy world for us all. They are still being subjected to brutal racism from their governor and president, but they are far from new to this battle and know how to proceed.

An Update on the Human Experiment in Marion Prison Lindsey Graham and Ric Grenell Reveal Mike Flynn May Not Have Fully Disclosed...