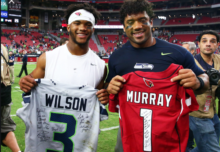 Yesterday was the Scaramucci point; i.e. eleven days to go. Now it is ten, and it all is getting to be overwhelming. A perfect time for some Trash, as Trash was always about giving a release from the daily drudgery. Off we go!

Am still of the opinion that trying to play college football during the pandemic was a bad idea. But playing they are. In that regard, let’s talk about Wisconsin, who put on a show last night. Once we discussed the new whiz kid on the Badgers’ block, and it was Russell Wilson. He turned out to be all that, at Wisconsin and then in the NFL. But last night was ridiculous. First time redshirt freshman starter Graham Mertz merely completed 20 of 21 passes for 248 yards and five touchdowns in the Badgers’ 45-7 win. That is pretty good.

In the pros, after a Covid announcement by the Raiders, the NFL and NBC suddenly flexed the SNF game to Seahawks at Cardinal, purporting it to be to address Covid concerns. That is a joke. If Covid were the meter, you would give the Raiders more time, even if hours to comply and play. Just hazarding a guess here, but maybe the NFL and NBC figured Russell Wilson versus Kyler Murray was a better game and draw, and did not have potential to be cancelled at the last minute. If so, that was pretty much a smart play.

The Bucs at Vegas is still a must watch if available to you. Steelers at Titans is still the real game of the day. I’d normally take the Steelers with Big Ben back to normal. Would not bet a cent on it though, the Titans, Vrabel and Tannehill, are on a fair roll, and then there is Derrick Henry. This will be a fun game. Look too to Bears at Rams. Seems kind of ho hum, but is an important game.

This weekend is also the Portuguese Grand Prix. Now it has been a while since there was a Portugese, but there is a real history. Of course the Mercs of Hamilton and Bootas have to be favored. It is kind of a crazy looking circuit for the new iteration of F1 though. Could be interesting!

Today’s music is by Bruce. When he says no surrender, he means it. Listen to him, think about the time old message, and GO VOTE to make sure the Trump Train leaves the station. Enjoy Bruce at his rocking best.