Chuck Grassley and Ron Johnson recently released a 285-page report relitigating a story made public in 2017 about how Mueller’s team obtained records from General Services Administration. The report adopts an entirely opposite stance as the SSCI Russia Report did. The latter discussed how unheard of it was for an Administration to claim an expansive Transition privilege. Chuck and Ron are outraged that a criminal investigation have access to such files, and similarly outraged that the subjects of an investigation did not get notice that their files had been obtained.

The report also makes clear that, at first, Mueller relied on SSCI’s request for its records request, and only later in the summer made their own. In other words, Chuck and Ron have a complaint, in part, with SSCI (though they don’t say that).

The report is most useful for revealing which Transition officials Mueller’s team was interested in. On August 23, Mueller’s team sent a records request for these nine officials closely interacting with Flynn while he was secretly undermining sanctions and other Obama policies in “collusion” with Russia.

Then Mueller’s team asked for the records of four more people — which appears to be the people who were at Mar-a-Lago when Flynn was secretly undermining sanctions with Russia.

The four Trump for America officials identified by the FBI were Sean Spicer, Reince Priebus, Stephen Bannon, and Marshall Billingslea.125 In the cover email, the FBI explained:

We have an additional four individuals we are currently interested it [sic]. … If possible, can you at least have their emails downloaded by tomorrow when I pick up the other information? . . . [W]e want to have it available when they swear out a warrant before then.126

Note, there’s a reference to the DC US Attorney’s office, too, so it’s possible they also needed these records as part of their investigation into the suspected bribe from Egypt that kept Trump afloat in August 2016.

But the craziest thing is how the report confesses that they are unaware of any legal process for these files. 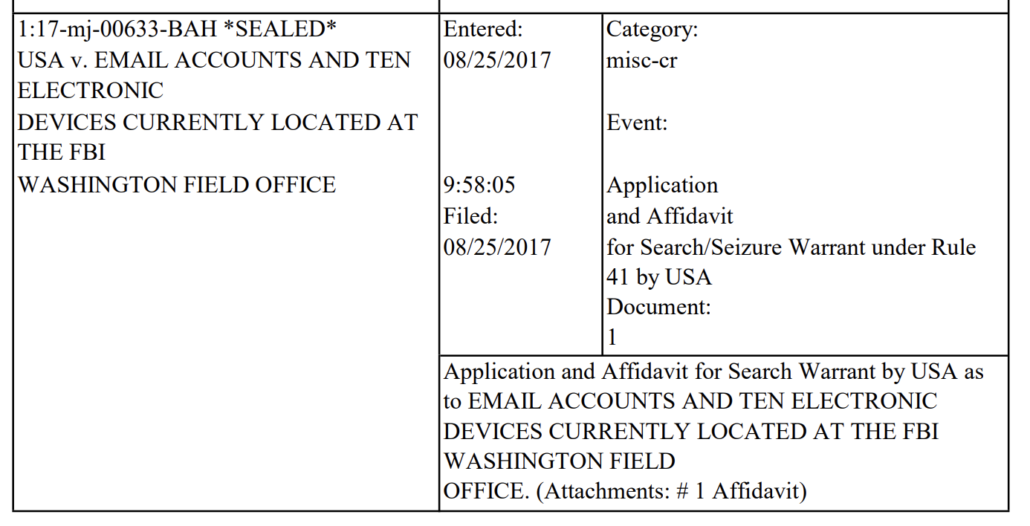 Maybe that’s a hazard of conducting investigations with no Democrats? It makes it harder to read accurately?