After Wailing That No One Was Reporting on the Hunter Biden Laptop, Glenn Greenwald Is Now Wailing because Ben Collins Did

As I’ve addressed both here and on Twitter (post 1, post 2), Glenn Greenwald has written at least three error-ridden posts wailing that no one has written about the Hunter Biden laptop that Steve Bannon and Rudy Giuliani used to seed an attempted attack on Joe Biden.

In an apparent attempt to generate more subscribers to his Substack of non-stop Hunter Biden laptop posts, Glenn continues to wail about people doing actual journalism. Yesterday, for example, he attacked Brandy Zadrozny (who was recently targeted directly by Glenn’s buddy Tucker Carlson) and Ben Collins, claiming that their reporting on organized disinformation efforts,  “is not journalism: it’s quashing of dissent.”

Collins responded with a long thread of the reporting that he had done over the last year, describing along the way the victims of such disinformation.

Among those stories, Collins included a story where he reported that a month before the Hunter Biden laptop was “discovered,” a fake person was pushing it. 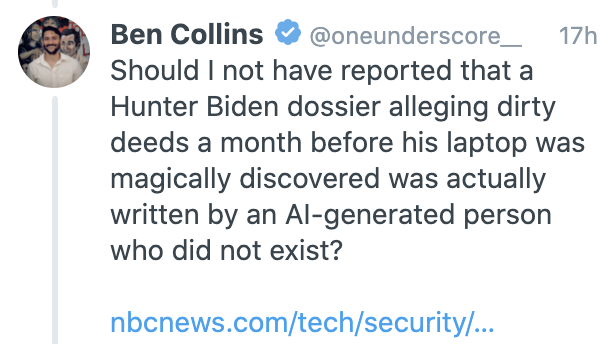 Just days before the election, then, Collins was doing precisely what Glenn was demanding, reporting on the Hunter Biden laptop. Only, he wasn’t telling the precise story Glenn wanted told about the “laptop.”

One month before a purported leak of files from Hunter Biden’s laptop, a fake “intelligence” document about him went viral on the right-wing internet, asserting an elaborate conspiracy theory involving former Vice President Joe Biden’s son and business in China.

The document, a 64-page composition that was later disseminated by close associates of President Donald Trump, appears to be the work of a fake “intelligence firm” called Typhoon Investigations, according to researchers and public documents.

The author of the document, a self-identified Swiss security analyst named Martin Aspen, is a fabricated identity, according to analysis by disinformation researchers, who also concluded that Aspen’s profile picture was created with an artificial intelligence face generator. The intelligence firm that Aspen lists as his previous employer said that no one by that name had ever worked for the company and that no one by that name lives in Switzerland, according to public records and social media searches.

One of the original posters of the document, a blogger and professor named Christopher Balding, took credit for writing parts of it when asked about it and said Aspen does not exist.

Glenn replied to Collins’ thread with a ridiculously dickish response, then tried to suggest that because Collins is paid by NBC, he must be a fraud. 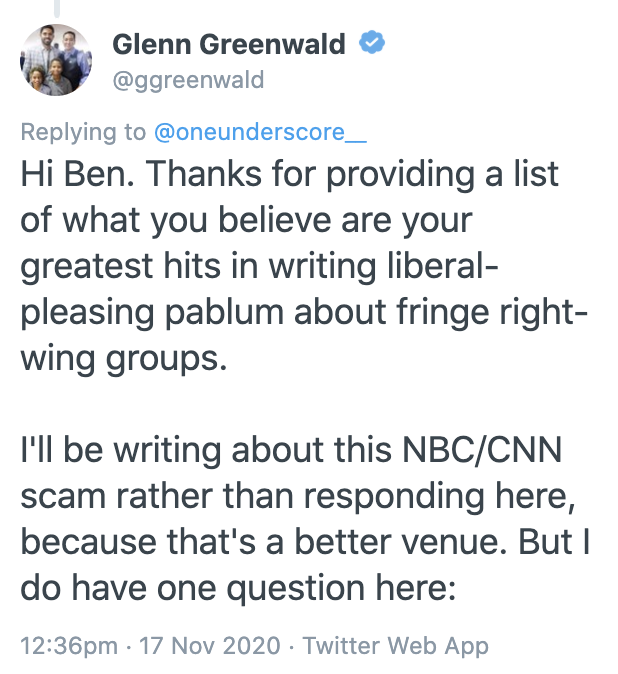 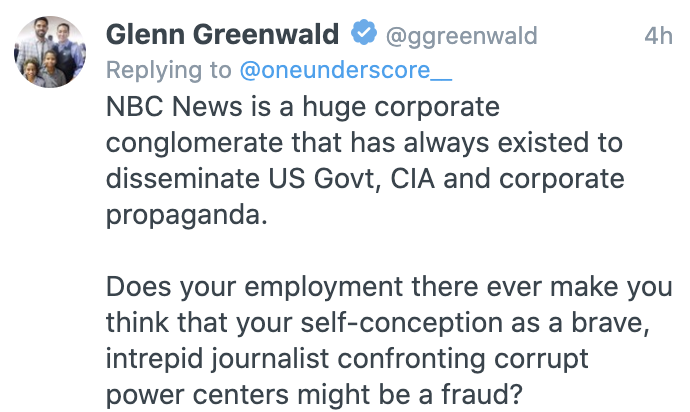 To recap then. Glenn has spent weeks suggesting no one at big media outlets was reporting on the Hunter Biden laptop.

Collins noted that he did.

Glenn’s response to was to call him a fraud because he did that reporting at NBC.

I guess it wasn’t reporting he was really after.

“Looking Forward” Will Be Harder for President Biden than It Was... Rudy’s Coup