Bannon Turned Out to Be the Irreplaceable One

All outlets are reporting that after equivocating all day and all week, Trump has decided to pardon Steve Bannon (along with Eliot Broidy and Paul Erickson). Here’s the WaPo version:

President Trump has pardoned Stephen K. Bannon, the firebrand architect of his 2016 campaign who was charged last year with defrauding donors to a private fundraising effort for construction of a wall on the U.S.-Mexico border, according to a senior White House official involved in the process.

Trump approved Bannon’s pardon late Tuesday, after days of frantic deliberations. Some aides said as recently as Monday night that the move appeared unlikely. Trump vacillated throughout the day Tuesday, and even after he said he was going to sign off on the pardon, it remained unclear for some time that he would actually do so, the official said, speaking on the condition of anonymity to discuss internal conversations.

WaPo correctly notes, it won’t be clear what this really means until we see how broadly it is written. The White House language seems to suggest it covers just the already charged crimes for fraud, though.

Stephen K. Bannon – President Trump granted a full pardon to Stephen Bannon. Prosecutors pursued Mr. Bannon with charges related to fraud stemming from his involvement in a political project. Mr. Bannon has been an important leader in the conservative movement and is known for his political acumen.

If it just excuses his fraud charges in SDNY, it’ll end that federal prosecution, leave him open for state prosecution on the same crimes plus civil suits, and/or make him the star witness against his co-defendants.

If it is broader, it will cover some of Bannon’s activities leading up to the insurrection, something that is likely to make a Trump conviction in the Senate more likely (as the Bannon pardon may all by itself).

One way or another, it probably doesn’t end Bannon’s legal woes (there’s also an investigation into his foreign influence peddling). Plus, there’s still the matter of his grand jury testimony in the Mueller investigation, just some of which was unsealed for the Roger Stone trial.

But Bannon, alone among Trump’s closest associates, got a pardon after the coup attempt made such pardons more risky.

Which makes the reasons for the pardon all the more interesting.

Update: There’s been some chatter that Trump might issue his spawn or himself “pocket pardons,” which I think was irresponsible speculation. There’s no way a Trump pardon that is not formally lodged with DOJ by noon will be deemed valid.

That said, the means by which he pardoned Bannon (and others) would allow room for Trump to have pardoned Bannon for more than the existing fraud charges against him. While some of the pardons Trump signed last night enumerated the crimes, Bannon and Broidy were pardoned 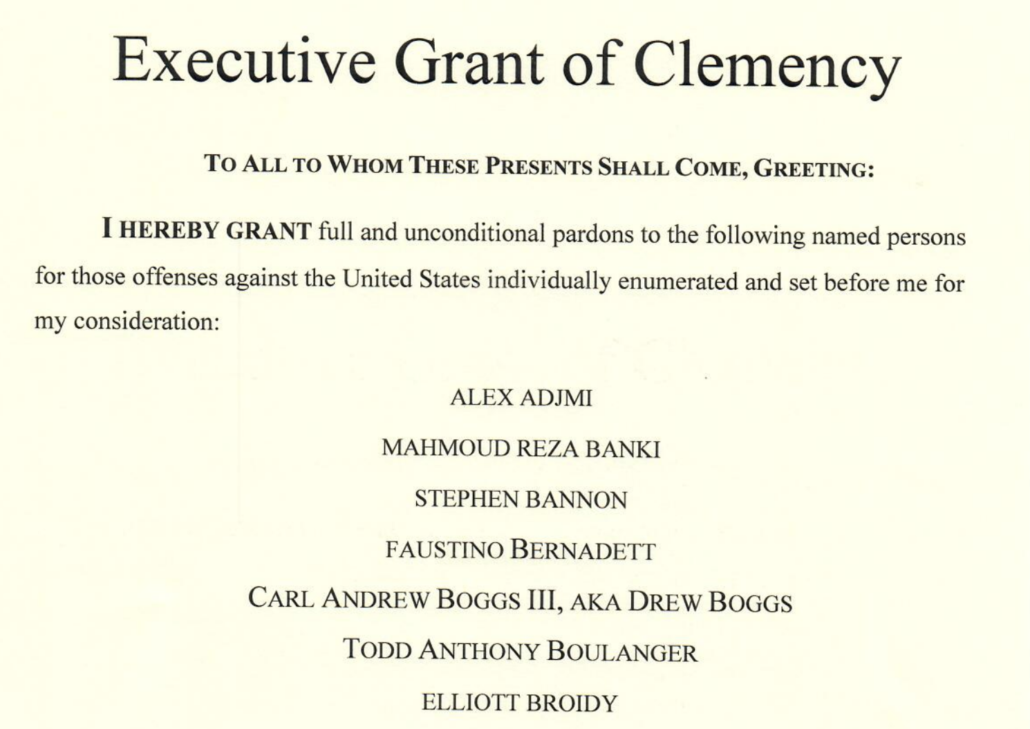 It’s possible that DOJ “enumerated” other crimes for Bannon which would then be covered under this language.

I doubt it though — and in any case, everything will be lodged in the next day or so, presumably in time to be included in impeachment considerations in the Senate.