Now We Know Why Jeffrey Rosen Has Been Silent, How About Chris Wray? 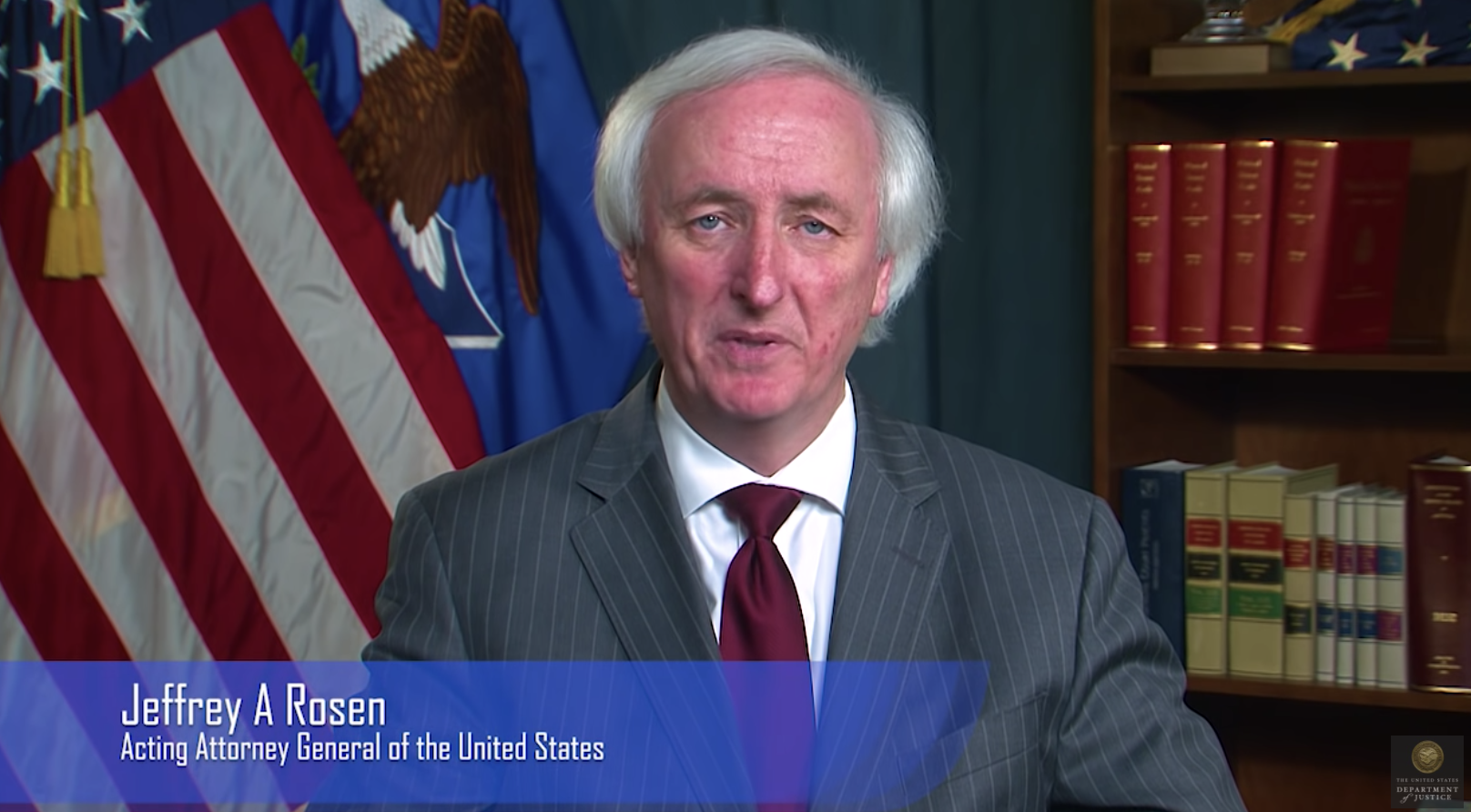 Since the attempted coup, both Jeffrey Rosen and Chris Wray (and Wray’s then-Deputy David Bowdich) were almost silent about the attack. A week after the attack, Rosen  a video in the middle of the night, explaining what he had done during the coup.

The day after, Wray released a short statement. More than a week later, he spoke at a closed-press meeting on inauguration security. Neither provided the kind of daily updates one would expect after such an attack.

Last night (as Rayne laid out here), NYT reported on why Rosen was so silent: because he’s a witness in what should be a criminal investigation into how the attack relates to the effort to overturn the election.

As the NYT lays out, in the days leading up to the coup attempt, Trump already tried to replace Rosen with someone, Jeffrey Bossert Clark, who would be willing to take steps to overturn the vote.

The effort to force Rosen to use DOJ resources to undermine a democratic election started on December 15, the day after Bill Barr resigned.

When Mr. Trump said on Dec. 14 that Attorney General William P. Barr was leaving the department, some officials thought that he might allow Mr. Rosen a short reprieve before pressing him about voter fraud. After all, Mr. Barr would be around for another week.

Instead, Mr. Trump summoned Mr. Rosen to the Oval Office the next day. He wanted the Justice Department to file legal briefs supporting his allies’ lawsuits seeking to overturn his election loss. And he urged Mr. Rosen to appoint special counsels to investigate not only unfounded accusations of widespread voter fraud, but also Dominion, the voting machines firm.

Then, over the weekend in advance of the certification, Assistant Attorney General Jeffrey Bossert Clark told Rosen Trump was going to make him Attorney General so he could chase Rudy Giuliani’s conspiracy theories.

On New Year’s Eve, the trio met to discuss Mr. Clark’s refusal to hew to the department’s conclusion that the election results were valid. Mr. Donoghue flatly told Mr. Clark that what he was doing was wrong. The next day, Mr. Clark told Mr. Rosen — who had mentored him while they worked together at the law firm Kirkland & Ellis — that he was going to discuss his strategy to the president early the next week, just before Congress was set to certify Mr. Biden’s electoral victory.

Unbeknown to the acting attorney general, Mr. Clark’s timeline moved up. He met with Mr. Trump over the weekend, then informed Mr. Rosen midday on Sunday that the president intended to replace him with Mr. Clark, who could then try to stop Congress from certifying the Electoral College results. He said that Mr. Rosen could stay on as his deputy attorney general, leaving Mr. Rosen speechless.

In a replay of the 2004 Hospital Hero moment, the others involved (including White House Counsel Pat Cipollone) agreed they’d resign en masse if Trump replaced Rosen, which led him to back off the plan.

NYT had four sources for this story, all of whom fear — even after Trump has been relegated to Florida — retaliation.

This account of the department’s final days under Mr. Trump’s leadership is based on interviews with four former Trump administration officials who asked not to be named because of fear of retaliation.

Clark claimed there were errors in this story, but ultimately he claimed Executive Privilege (his statement to WaPo on the topic, which I’ve used here, is more expansive).

In a statement that seemed to draw on language in the New York Times account, Clark said, “I categorically deny that I ‘devised a plan . . . to oust’ Jeff Rosen. . . . Nor did I formulate recommendations for action based on factual inaccuracies gleaned from the Internet.”

“My practice is to rely on sworn testimony to assess disputed factual claims,” Clark said. “There were no ‘maneuver[s].’ There was a candid discussion of options and pros and cons with the President. It is unfortunate that those who were part of a privileged legal conversation would comment in public about such internal deliberations, while also distorting any discussions. . . . Observing legal privileges, which I will adhere to even if others will not, prevent me from divulging specifics regarding the conversation.”

The WaPo version of this story names all who were involved in the confrontation with Trump (though the sources for the story are likely, in part, their aides).

At the meeting were Trump, Clark and Rosen, along with Richard Donoghue, the acting deputy attorney general; Steven A. Engel, the head of the department’s Office of Legal Counsel; and Pat Cipollone, the White House counsel, the people familiar with the matter said. The people said Rosen, Donoghue, Engel and Cipollone pushed against the idea of replacing Rosen, and warned of a mass resignation.

Clark says he will only respond to a sworn statement. By all means, the impeachment managers should demand sworn testimony, from all involved.

Of course, that would mean Pat Cipollone, who led the former President’s defense in his first impeachment trial, would be asked about the second time Trump tried to use government resources to cheat. Steve Engel, who authorized the withholding of a whistleblower complaint describing Trump’s earlier attempt, would also testify. Rosen, who participated in having DOJ chase Sidney Powell’s conspiracy theories about Mike Flynn, would be asked to testify about why the conspiracy theories about Dominion machines were any less credible than the Flynn ones. And Donoghue, who served as a filter for some of the conspiracy theories Rudy Giuliani had been fed by men who have since been named Russian agents, would be asked to testify about why Rudy wasn’t a credible source.

Rosen was silent in his final two weeks, presumably, for fear he might get fired and replaced by someone who would be more pliant to a coup attempt. But he — and the three others — are also witnesses to a larger plot that ended up in violence and death.

I wonder if Chris Wray has similar evidence he’ll be asked to share.

Crowdsourced Timeline: Tick-Tock to Insurrection and Beyond [UPDATE-3] The DOD Flunkies’ Convenient Lapse of Executive Privilege