Whither the Douglass Mackey Investigation? 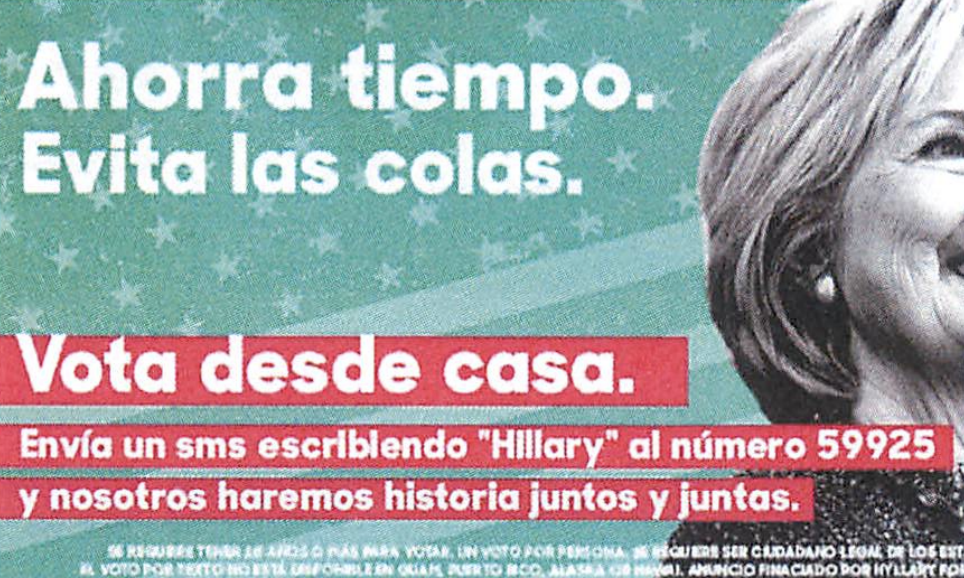 Yesterday, the FBI arrested Douglass Mackey, a far right activist who used the pseudonym Ricky Vaughn, for his efforts in 2016 to suppress Clinton voters. The complaint charges Mackey with a conspiracy against others’ Constitutional rights under 18 USC §241. I want to unpack what the complaint says about where this investigation came from and where it might head, if anywhere.

Mackey and others led almost 5,000 people to miscast their 2016 vote

There’s a lot of language in the complaint about Mackey’s social media efforts — which has a number of right wingers, including those who were tangentially involved in this effort, whining about their own First Amendment rights. Ultimately, though, the crime boils down to ads that Mackay made and popularized in the weeks leading up to the 2016 election encouraging Hillary voters to text their vote. If people did so, they would have thought their vote was cast, when in effect they would have texted it to a void.

The complaint notes that the text code Mackey used for the campaign got 4,900 responses.

According to iVisionMobile, the company that owned the Text Code listed in the two Deceptive Images distributed by MACKEY, at least 4,900 unique telephone numbers texted “[Candidate’s first name]” or some derivative to the Text Code on or about and before Election Day, including many belonging to individuals in the Eastern District of New York. Of the approximately 4,900 numbers that corresponded with the Text Code, approximately 4,850, or 99%, sent their texts after MACKEY first tweeted a Deceptive Image from MACKEY Account 2. [my emphasis]

Effectively, then, the complaint argues that Mackey tricked almost 5,000 people to miscast a Hillary vote, thereby depriving them of their right to cast a valid vote.

This investigation was started and finalized under a Trump US Attorney

Right wingers are also whining that the timing of this complaint shows that the Deep State is moving against Trump supporters immediately after his departure.

That makes no sense.

In October 2020, as now, the Brooklyn US Attorney was Seth DuCharme. While DuCharme spent his career in EDNY, he was a key aide to Bill Barr, both as Counselor and then PADAG. In July, Barr effectively swapped DuCharme back into EDNY and moved the then US Attorney, Richard Donoghue, to PADAG.

In other words, the guy whose name will be on this indictment is among Barr’s most trusted aides.

DuCharme even issued a strong statement about this prosecution when it was announced.

“There is no place in public discourse for lies and misinformation to defraud citizens of their right to vote,” said Seth D. DuCharme, Acting U.S. Attorney for the Eastern District of New York. “With Mackey’s arrest, we serve notice that those who would subvert the democratic process in this manner cannot rely on the cloak of Internet anonymity to evade responsibility for their crimes. They will be investigated, caught and prosecuted to the full extent of the law.”

I argued in this post that early indictments in the Biden Administration would (because he’s not immediately replacing all US Attorneys) be approved by Trump loyalists, and this is a perfect example of that.

One of the most interesting questions about this complaint is why actions that were completed in 2016 and didn’t appear to take much investigation beyond some warrants to Twitter and two interviews were only charged in 2021.

It’s not entirely clear where this investigation came from, but the most likely is that when HuffPo originally exposed Mackey in 2018, someone at the FBI or DOJ took notice. That seems all the more likely given that the complaint relies on some of the research in that original story, including that Mackey had a reach on Twitter well outside his follower count.

There was no mistaking Ricky Vaughn’s influence. He had tens of thousands of followers, and his talent for blending far-right propaganda with conservative messages on Twitter made him a key disseminator of extremist views to Republican voters and a central figure in the “alt-right” white supremacist movement that attached itself to Trump’s coattails. The MIT Media Lab named him to its list of top 150 influencers on the election, based on news appearances and social media impact. He finished ahead of NBC News, Drudge Report and Stephen Colbert. Mainstream conservatives didn’t know they were retweeting an avowed racist and anti-Semite, but they liked what Ricky Vaughn had to say.

So the simplest explanation for the genesis of this investigation is that article.

There are other possibilities, though.

For example, as that original HuffPo story noted, Mackey magnified one of the Internet Research Agency’s most effective Twitter accounts, TEN_GOP, which many right wingers mistakenly believed was the official account of Tennessee’s Republican Party.

In the data set of significant accounts we looked at, Ricky Vaughn retweeted @TEN_GOP the most, by far. Although Twitter shut down his @Ricky_Vaughn99 handle in October 2016, another handle he possibly used, @RapinBill, took over and retweeted @TEN_GOP at least 162 times between early March and late August 2017. (@RapinBill also retweeted @Pamela_Moore13, another Kremlin-controlled account, at least 37 times during this period.)

Some far-right sources suggest that @RapinBill might be an account run by another anonymous bad actor, an assertion for which there is no proof, but the account has nevertheless capitalized on the Ricky Vaughn brand of far-right intolerance and fake news. We will update this story as we learn more.

Curiously, @RapinBill, which is still active and followed by Donald Trump Jr., does not appear to have received a single reciprocal retweet from @TEN_GOP during the time period we looked at, perhaps indicating an attempt to conceal the connection. @RapinBill retweeted @TEN_GOP until the end. When Twitter finally shut down @TEN_GOP last August, after having ignored numerous complaints about the Russian account, Ricky Vaughn did not take it well. He groused that @TEN_GOP had been “banned for supporting our president.” Within hours, he was steering traffic to the Kremlin’s backup account:

Another possibility is that this investigation arose out of Mueller’s investigation of Mike Flynn and Roger Stone’s focus on social media during the 2016 election. As Luke O’Brien (the reporter who first unmasked Mackey) noted in his coverage of the complaint, Mackey had ties to efforts involving Flynn and Stone in 2016.

Mackey and the three co-conspirators that HuffPost was able to identify are closely associated with a group of high-level pro-Trump political saboteurs known as “MAGA3X” that had ties to the Trump campaign and Trump’s disgraced former national security adviser Michael Flynn.

Presided over by far-right Twitter influencer Mike Cernovich, white nationalist funder Jeff Giesea, who is a disciple of billionaire Peter Thiel, and neo-Nazi collaborator Jack Posobiec, who counts Roger Stone as a mentor, MAGA3X spearheaded the Pizzagate disinformation campaign on social media that targeted Hillary Clinton in the weeks before the 2016 election.

Mueller’s team focused closely on both Flynn and Stone’s involvement in social media in 2016. In August 2016, Stone pitched both Paul Manafort and Steve Bannon on how to win ugly using social media. The overt parts of Stone’s effort involved an Erik Prince-funded effort to suppress the black vote. One of the still-sealed warrants pertains to multiple Twitter accounts that don’t appear to be Stone’s. And Mueller interviewed several people who worked with Stone on social media campaigns (and asked Andrew Miller about Alex Jones’ campaigns, as well).

The biggest reason to doubt that this investigation comes out of Mueller’s is the venue. While Mackey has ties to Brooklyn, at the time of his actions, he was living in Manhattan, SDNY rather than EDNY. The complaint seems to claim venue based on victims who reside in EDNY, bolded in the blockquote above, not Mackey’s location at the time of his actions. If Mueller had referred this, he presumably would have referred it to where the actions took place, SDNY.

It’s also possible it comes out of the Intelligence Committees’ investigations into disinformation. As Quinta Jurecic noted last night, Mackey’s ads were among those Twitter shared with the committees in 2018, though not by name. But again, the logical place to pick that up would have been SDNY or even DC.

There’s one other possibility. Last fall, in an effort to feed Trump’s conspiracy theories, Barr affirmatively mobilized voter fraud investigations. If someone had been sitting on the evidence unveiled in 2018, Barr’s action would have provided the opportunity to wrap it up into an indictment, effectively using GOP claims of voter fraud as the excuse to prosecute GOP voter fraud.

DOJ charged just one member of a conspiracy

Perhaps the most enticing part of this complaint is that it explicitly includes four other people as co-conspirators.

It describes the actions of Mackey’s co-conspirators to include:

It’s not entirely clear how EDNY chose to treat these four as co-conspirators as distinct from other Twitter users and DM collaboration participants.

The complaintlists four co-conspirators referred to only by Twitter “user IDs,” a unique string of numbers assigned to each Twitter account. HuffPost can report that one co-conspirator is a prominent alt-right botmaster who goes by “Microchip” and was instrumental in making pro-Trump and anti-Hillary Clinton hashtags and content go viral on Twitter during the 2016 election. A fascist accelerationist who has expressed admiration for Adolf Hitler and Nazism, Microchip claims to have been involved in the early spread of the QAnon conspiracy cult and repeatedly told this reporter that his goal was to destroy the United States.

Another of Mackey’s co-conspirators is Anthime “Baked Alaska” Gionet, a pro-Trump white nationalist who was arrested on Jan. 16 for his involvement in storming the Capitol on Jan. 6. Gionet also participated in the deadly white nationalist “Unite the Right” rally in Charlottesville, Virginia, in 2017. (A New York Times story reported Wednesday afternoon that Gionet was a co-conspirator, citing a source close to the investigation, and HuffPost can confirm that reporting based on the Twitter ID cited in the complaint.)

HuffPost was able to link the Twitter IDs in the complaint to Gionet and Microchip through previously collected Twitter data, interviews and evidence left by both extremists on other websites. In direct messages with this reporter last year, Microchip also confirmed that he was using the Twitter account associated with the user ID listed in the complaint.

The user ID for a third co-conspirator belongs to a pro-Trump far-right activist who goes by “Nia” and has a long history of spreading disinformation on Twitter. HuffPost has not yet been able to identify the fourth co-conspirator.

It’s unclear whether EDNY plans to add them in an indictment or not. It’s possible they just named them as co-conspirators so as to be able to use their DMs and other Tweets to build the case against Mackey (which would make it a matter of prosecutorial efficacy). It’s also possible they’ll get added when this is indicted.

Particularly given the inclusion of Baked Alaska in here, though, it’s possible that this is an effort to crack down on key far right propagandists as part of a larger crackdown in the wake of the January 6 insurrection.

There’s just one detail that suggests this might go further: the inclusion of a PIN prosecutor in the prosecution team.

Among the other cases James Mann is or was prosecuting are the Andy Khawaja case funneling money from the UAE to both 2016 candidates (though only the Hillary side was charged; George Nader is one of the defendants) and the Elliot Broidy case, whose pardon will close out that case.

While his inclusion by no means makes this a certainty, it raises the chances that this social media activity will either be considered in the scope of campaign donations or might even involve foreign partners.

A Tale of Two Zip-Tie Guys: Criminal Protestor or Armed Insurrectionist? Tunnels and Trump: The Missing Details in the Oath Keeper Conspiracy