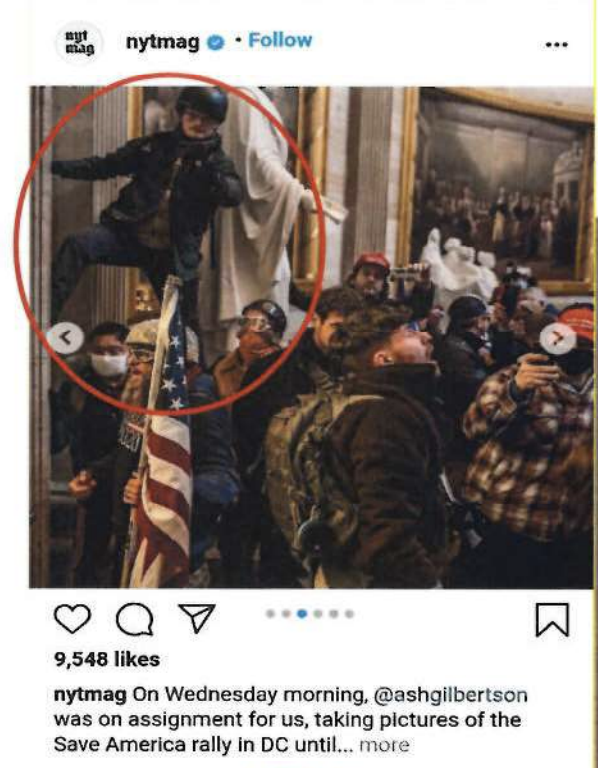 On January 7, the FBI received a tip from a high school acquaintance of Jonah Westbury that he had posted video from inside the Capitol to TikTok and then, the tipster later relayed, also on Snapchat. The FBI interviewed the tipster on January 11.

But then the FBI did nothing for three months.

On Friday, the FBI finally got around to arresting Westbury. His arrest affidavit includes — among the only additional evidence collected since that early tip — two stills from MAGA tourism videos he posted to Snapchat. 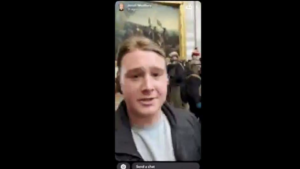 The only other evidence collected in the last three months described in the affidavit are a list of videos posted to Snapchat. One, apparently sent by chat the day after the insurrection, shows him panning inside the Capitol and describing “First time” in the Capitol, but the video cuts off abruptly.

Then there are five videos that — given the time and his other videos from the Rotunda — likely shows the breach of the east Capitol door at 2:40 on January 6, including what might be a longer (perhaps the complete) version of the panning video.

Westbury was charged with the two trespassing charges that virtually everyone who entered the Capitol got charged with and that’s likely all he’ll ever be charged with. But a number of people who entered the building with him and may show up in his videos — including Joe Biggs, two other Proud Boys, and the Oath Keeper stack — are among the defendants of most investigative interest at DOJ.

A family member of Les Little called the FBI the day of the insurrection to let them know that Little had texted the person to boast that “We just took over the Capital!” [sic]. Little’s relative also shared a Facebook post showing that Little had been in the Capitol.

The FBI has done more investigation into Little — two interviews with Little’s family member and a warrant for his phone proving his presence at the Capitol — but the most interesting investigative development included in his arrest affidavit is that when the FBI interviewed him almost three months ago, he chose not to share all the photos he took from the Capitol, including from inside the Senate chamber.

On January 13, 2021, the FBI interviewed LITTLE at his residence in Claremont, NC. LITTLE told the FBI that he lived at that residence with his elderly mother.

LITTLE voluntarily provided the following information: LITTLE went to Washington, DC the day before the planned protest on January 5, 2021. On January 6th, LITTLE went to the protest.

LITTLE said he walked around the Capitol, smiling and fist bumping other people who were also inside the Capitol. LITTLE walked around the Senate Chamber and took photographs of himself there. LITTLE stated that he sent these photographs to people that he trusted. LITTLE said that he must have gotten caught up in the moment when he sent a text about taking over the Capitol. LITTLE left the Washington, D.C. area and returned to North Carolina that evening.

LITTLE chose not to answer follow-up questions from the FBI Agents. LITTLE also declined to turn over the photographs that he took with his telephone of himself and others inside the Capitol.

Like Westbury, Little was charged only with trespassing crimes when he was arrested last Friday. But his arrest may lead to the FBI obtaining more information, including pictures on his phone from the Senate chamber, another of the locations of acute investigative interest.

Starting on January 11, two tipsters contacted the FBI that this photo, published by the NYT Magazine, showed Stephen Horn. 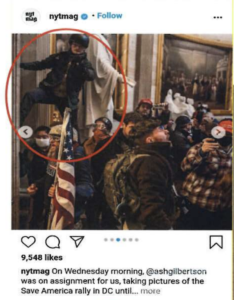 Horn claimed to be there to ensure an accurate version of events was captured and he filmed 2 hours of video from the event. He has no media credentials, but the only evidence from the arrest affidavit that he was there to support the mob came when he — once — chanted USA along with the crowd.

Horn was interviewed on February 24 and admitted stepping over a barrier.

But the more interesting detail may be that Horn witnessed what transpired in Nancy Pelosi’s office.

“I did not witness police doing any property damage, but I did see some in the crowd stop others in the crowd from doing property damage, or exhorting others not to do so, even in Nancy Pelosi’s office”; “I was on the front lines of the assault on the capitol”; “I thought it was important to document the event”; “I followed the crowd in. I was not there when they broke through most of the barriers around the outside of the capitol. I was not looking for Pelosi’s office, I guess it was just happened to be right there (probably gets one of the best offices).”

I’m less certain it’ll remain the case, but like Little and Westbury, Horn was charged only with trespassing crimes.

But like the other two, the government arrested on Friday another person who had filmed a scene of acute investigative interest.

To be clear: The evidence that these men trespassed is fairly strong. But at a time when the focus of more and more arrests are either those accused of assaulting cops or those with ties to the militia conspiracies, the FBI arrested a bunch of people on Friday who took video evidence of key sites of acute investigative interest.

Update: There are two more potential instances of this in recent days. The arrest affidavit for Michael Rusyn (h/t Zoe Tillman for the filing) describes a different video showing him videoing a confrontation with the police that he participated in. It also described the Geofence warrant served on Facebook (including the date, January 11), which is useful for other filings.

More interesting, an InfoWars employee, Sam Montoya, was arrested. His arrest warrant describes how he posted a 44-minute video of the insurrection, recording himself cheering the rioters at each step.

He was always identified as someone who recorded Ashli Babbitt’s shooting, and the arrest warrant describes that too. It also describes Montoya, days after the insurrection, trying to blame leftists for the violence.

Update: Here’s another example of an arrest of someone who took video of key scenes. Thomas Adams was charged with trespass and obstruction after filming everyone ransacking the senate.