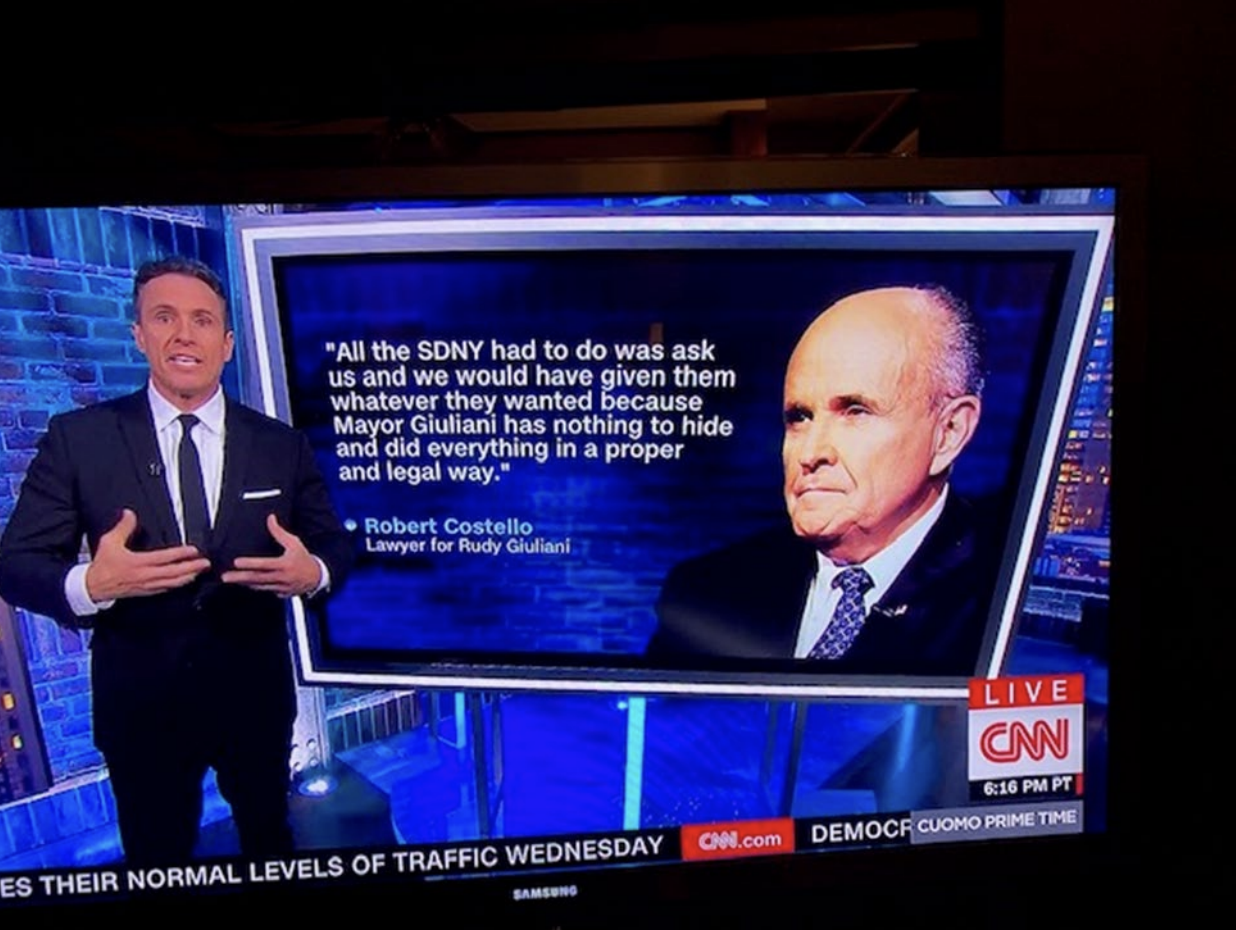 In addition, in the original warrant for the iCloud account, there is a nondisclosure order based upon an allegation made to the issuing Court, that if Giuliani were informed of the existence of the warrant, he might destroy evidence or intimidate witnesses. Such an allegation, on its face, strains credulity. It is not only false, but extremely damaging to Giuliani’s reputation. It is not supported by any credible facts and is contradicted by Giuliani’s efforts to provide information to the Government. We should be allowed to question the Government as to what basis it had, if any, to make that assertion. Accordingly, we request the information that was presented in the iCloud warrant to justify the NonNotification Order pursuant to 18 U.S.C. Section 2705 (b) that “there is reason to believe that notification of the existence of this warrant will result in destruction of or tampering with evidence, and/or tamping (sic) with potential witnesses, or otherwise will seriously jeopardize an ongoing investigation.” We also request access to the application for any extension of the non-disclosure provision which originally lasted for a year.

As the single exhibit to prove that Rudy had reached out to DOJ to provide help, his attorneys included a picture of a TV screen with his attorney making that claim (I’m not sure whether this claim is November 25, 2019, or in the wake of the most recent searches) when it might have avoided the search. But then they include all this verbiage which sure seems to describe Rudy acting as an Agent of Russian-backed Ukrainians who just didn’t give a shit about registering as such because why do that if the President can bail you out?

It was premature and unwarranted for the Government to seize Giuliani’s ESI because Giuliani had already cooperated with the U S State Department (“State”) through Mike Pompeo, the Secretary of State, in March 2019 concerning Ukraine. He also cooperated again in July and August of 2019 at the request of the State Department in assisting them with regard to Ukraine. In fact, there has never been an occasion where Mr. Giuliani has refused to cooperate with, or give assistance, to his government. This was as true during the Clinton administration as it was during the Bush administration.

As a reminder, this same attorney had cooperated with the State Department and offered, for a year and a half, to answer any questions from the SDNY about any subject or crime, with no limitations except for privileged matters. During that same time period, Giuliani did in fact cooperate with Main Justice, through their designee in Pittsburgh on the subject of the Ukraine. Amazingly, the SDNY continually turned down the offer by stating that while they would be happy to hear anything Mayor Giuliani’s counsel had to say, they refused to identify the subject, although those subjects were disclosed to the media.

Plus, Rudy’s lawyers note — as if it helps him — that they only reached out to offer to help on November 4, 2019, the very same day the warrant was obtained (as if maybe a birdie warned him?), which means he didn’t offer to help for the entire month after the indictment against his business partners Lev Parnas and Igor Fruman was unsealed.

But Rudy’s letter and a similar one from Victoria Toensing’s lawyers lay out certain details of the investigations into the two of them.

Rudy says that the earlier warrants showed listed FARA, unregistered Foreign Agent, abetting, and conspiracy as the crimes under investigation.

In essence, the Government was looking for evidence that Giuliani was acting as an agent, unregistered agent or lobbyist of a Ukrainian national, government official, corporation or political party or in violation of the foreign agent registration and lobbying laws or making contributions on behalf of a foreign principal (see attachments to search warrant also citing 22 USC §§612 and 618, 18 USC §951, 18 USC §2, and 18 USC §371).

It’s not entirely clear whether the later warrants against Rudy are the same. He doesn’t say. Plus, he says the later search was only “nearly identical,” as compared to Toensing’s claim that the searches were “virtually” identical. (The content, of course, wouldn’t be identical.)

For her part, Toensing is quite worried that DOJ seized information about a client, who sure seems like Dmitro Firtash.

Moreover, in the Fall of 2019, during an intense debate over the impeachment and the campaign for the upcoming Presidential Election, with Giuliani publicly acting as President Trump’s personal attorney, the Government decided to take the unprecedented step of seeking a search warrant for Giuliani’s iCloud account. In these circumstances, on the heels of the precautions instilled by Judge Wood in a nearly identical situation, the use of a one-sided “filter” team was highly inappropriate and inadequate to identify privileged materials and thereby protect Giuliani and his clients ’attorney-client privilege, and highly indicative of the appearance of impropriety. Had this been done overtly, or through the Government’s less onerous subpoena powers, we would have requested that a Special Master to be appointed at the time. Instead, the Government has had these private, confidential, and privileged materials in their possession for over eighteen months, and established a Taint Team who acted as prosecutor, defense lawyer, Special Master and Judge entirely in secret, knowing full well this contravened the protocol established in the Cohen case.

Except it’s not remotely unprecedented. That is, literally, the same thing that happened to Cohen. Indeed, his Trump Organization emails were preserved (at Microsoft) and searched by Mueller’s team, then shared with SDNY under a new warrant. And those emails actually did pertain to the President — though from the campaign period, not the period when he was trying to coerce campaign assistance from a foreign government.

Ultimately, a big story here is that someone high up in Billy Barr’s DOJ authorized the sealed searches in November and December 2019, making Rudy’s wails far less convincing. My guess is that after Rudy made Brian Benczkowski look corrupt for taking a related meeting on a bribery case (of the Venezuelan bankrolling the Ukrainian grift) at a time when Rudy was being criminally investigated, Benczkowski wasn’t all that interested in going out on a limb to protect Rudy, especially as it would focus attention on the earlier corrupt review of the whistleblower complaint. My further guess is that after Benczkowski resigned, effective July 3, and after Billy Barr failed to replace Geoffrey Berman with a loyal flunky during precisely the same weeks in June 2020, Barr and Jeffrey Rosen went to epic lengths to prevent this warrant from being approved, with Rosen going so far as to require that a specific person in the Deputy Attorney General’s office be required to sign off on such a warrant on December 30, weeks before the second effort. Whatever the case, Trump’s DOJ approved the covert warrants, the one both lawyers are wailing the most loudly about.

If, as the lawyers wail, SDNY has been sifting through their cloud content, then this warrant shouldn’t hurt them all that much more than their earlier searches (unless Parnas revealed that they weren’t backing up their encrypted apps to the cloud).

Except — particularly given the confirmation that Lev Parnas unsuccessfully deleted his own iCloud account — Rudy’s insistence that he doesn’t have a guilty conscience and wouldn’t have deleted anything rings false.

Despite these two warnings that the SDNY was seeking permission to apply for a search warrant for his electronic devices and because he had no guilty conscience, Giuliani took no steps to destroy evidence or wipe the electronic devices clean. Since Giuliani was not under subpoena, he had no legal obligation to preserve that evidence, but he did so because he is an innocent man who did nothing wrong.

At about this stage in the Michael Cohen litigation, we learned that he, too, had deleted some information.

Not only has SDNY been sorting through these files for 18 months, they had Parnas and Fruman’s content for far longer, and since then Parnas has been trying hard to take Rudy down. So I would imagine SDNY had good reason to believe that Rudy may have destroyed evidence.

October 14, 2019: The Criminal Investigation into Paul Manafort Was (and May Still be) Ongoing–and Likely Pertains to Trump’s Ukraine Extortion

The Parnas and Fruman grift was, in many ways, the direct continuation of Manafort’s efforts to cash in on Trump’s win. You’d think that would raise the stakes of Rudy’s privilege claims — but Trump doesn’t appear to care.

October 16, 2019: On the Potential Viability of Foreign Agent Charges for Rudy Giuliani

I argued that doubts that Rudy could be prosecuted for FARA were not only too pat, but ignored his other criminal exposure for precisely the crimes that would be named in his warrant weeks later.

October 22, 2019: How DOJ Worked Overtime to Avoid Connecting the Dots in the Whistleblower Complaint

I laid out that Criminal Division didn’t do any of the things they’re supposed to do with the whistleblower complaint. That may have forced their hand to approve of the initial warrants against Rudy and VicToe.

October 25, 2019: Main Justice Now Looking for the Evidence in Plain Sight They Ignored in August

Just before the sealed warrants were obtained, Main Justice got more involved in the SDNY investigation.

November 4, 2019: When Your Joint Defense Agreement with the Russian Mob Blows Up in Your Face

I’ve written several posts about the ridiculous claims John Dowd made to try to cover this up in a network of privilege claims. The original is linked in the linked post. But I’m linking this one because I posted it on the same day DOJ got a warrant for Rudy’s iCloud.

November 23, 2019: Timeline: How Rudy Made It Hard for Mike Pompeo to Show Any Leadership

This post includes all the foreign influence peddling that Rudy was doing during the period covered by his warrant.

There were a bunch of discovery issues in the case in January 2020, including the revelation that Lev Parnas had deleted iCloud data and an affirmative assertion that Parnas could not waive attorney-client privilege for Dmitro Firtash.

Barr was working hard to kill the Ukraine investigation during the period through which Rudy’s subpoena extends.