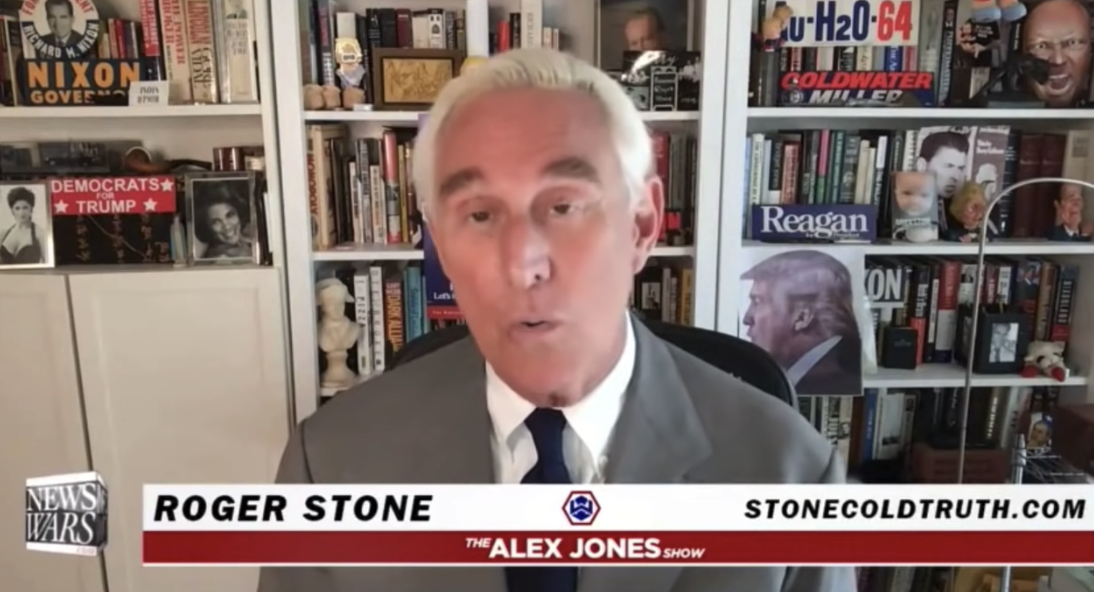 Roger Stone is trying (thus far unsuccessfully) to pick a fight with Steve Bannon and the Mercers.

First, earlier in June on Alex Jones’ show, Roger Stone accused Bannon, among other things, of lying in his testimony against Stone and blackmailing Trump to get a pardon.

Stone: Let’s me very clear. Not only did Steve Bannon steal the name of my Infowars show with the great American Owen Shroyer, ‘The War Room,’ but he testified falsely at my trial against me. He was an informant for Robert Mueller. If you take his sworn testimony before the House Intelligence Committee, which was sealed at the time of my trial, and his testimony on the stand at my trial, he clearly perjured himself in my trial.

So right now, here, today, I am challenging Steve Bannon to come on Infowars and debate this, let’s have it out. Alex, you can moderate it, so it stays civil. But he needs to answer as to why he was working with Robert Mueller to destroy me and send me to prison. So there it is. The challenge, the gauntlet has been laid down, big Steve. Cmon, sloppy Steve. We can find a suit and tie for you that’s clean, I think. And you should come on Infowars and answer what I just said.

And by the way, all you little Bannon groupies who want to go on social media and challenge me? I wouldn’t suggest it. Because I will merely block you. Facts are facts. As the NYPost reported, and Jonathan Turley, the GWU law professor who read both transcripts and concluded, Bannon, clearly perjured himself at one place or the other. And since the entire question on which I was being tried was lying to the House Committee, you would think that it would be germane, it would be important. As Professor Turley pointed out, there were 40 lawyers in the room at the time that Bannon testified prior to my trial.

[Alex Jones agrees, asks why Stone has turned on Bannon, and Stone claims Bannon only testified against Stone because he was under investigation himself]

He should not be able to put himself forward as an advocate  for the America First agenda. Steve Bannon publicly accused the President of having Alzheimers, he said the Trump Organization was a criminal enterprise, he said that Trump would be prosecuted — I can do this almost verbatim. When the American people learn he’s not a billionaire, he’s just another scumbag.

His defenders say, oh well that was two years ago. It doesn’t matter when it was. Steve Bannon called the President of the United States —

Jones: Well here’s the 64 Trillion dollar question. Why did Trump give him a pardon?

Stone: I think he was blackmailed. That’s what I think. That is my opinion.

More recently, Stone called on his groupies to stop using Parler and to “boycott these assholes,” the Mercers, generally. 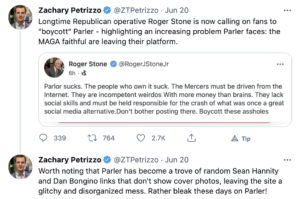 Stone is absolutely right that Bannon perjured himself, though the record shows that he perjured himself before HPSCI, not the grand jury and Stone’s own trial. As I’ve noted, Bannon was basically reciting a White House script handed to him at that HPSCIi appearance. But over the course of multiple interviews with Mueller’s team, Bannon was slowly made to hew closer to the truth about Stone and other things, presumably because he was faced with more and more documents showing that his original story did not resemble the documentary record (HPSCI got none of these documents, which is how he was able to read directly from the White House script).

I’ll return to Stone’s war on the Mercers.

But given Stone’s claim that Bannon blackmailed Trump for a pardon, I want to look at a detail from Bannon’s October 26, 2018 interview with Mueller’s team that goes to the core of Stone’s own successful effort to blackmail Trump for, first, a commutation, and then a pardon.

Throughout his Mueller interviews, Bannon excused his coordination with Stone by explaining that the rat-fucker could fuck up your life if you didn’t placate him, and so he had no choice but to keep him happy. In the October 2018 interview, Bannon seemingly responds to a question about whether he and Trump talked about Stone with a weird chain of associations.

While BANNON was at Breitbart in 2013-2015, BANNON had a strong relationship with [redacted]. BANNON heard from [redacted] STONE was still talking to Trump and was an advisor. STONE subsequently made those statements to BANNON as well. BANNON was suspect and upset. BANNON believed you had to eep TRUMP “on program.” While BANNON was on the Trump Campaign he never heard any mention of STONE from TRUMP or anyone else on the campaign. After the win, STONE tried a full court press in order to get a meeting with TRUMP. [redacted] eventually set up a meeting with TRUMP and STONE in early December 2016 on the 26th floor of Trump Tower. TRUMP didn’t want to take the meeting with STONE. TRUMP told BANNON to be in the meeting and that after 5 minutes, if the meeting hadn’t concluded, to throw STONE out. STONE came in with a book he wrote and possibly had a folder and notes. [full sentence redacted] TRUMP didn’t say much to STONE beyond “Thanks, thanks a lot.”. To BANNON, this reinforced STONE [redacted] After five to six minutes, the meeting was over and STONE was out. STONE was [redacted] due to the fact that during the meeting TRUMP just stared. This reinforced what BANNON thought about STONE, that STONE was a [redacted]. BANNON never heard TRUMP talk about STONE. The 2010 conversation with TRUMP about STONE was the only time, to the best of BANNON’s recollection. BANNON never heard that STONE was talking to candidate TRUMP while BANNON was on the campaign. BANNON never asked then candidate TRUMP if he talked with STONE. Candidate TRUMP never could have talked to STONE, without BANNON knowing about it, and he had the opportunity to do so. BANNON was not aware of who TRUMP talked to in the evenings and they could have had a phone call. BANNON was not aware of who TRUMP was talking to in the evening, but he was definitely talking to people. BANNON did not have visibility into that. TRUMP was not shy about throwing names out of people he had talked to, and he never said STONE.

What appears to be entirely an expression of Bannon’s stream-of-consciousness in response to a question about whether he knew of Stone communicating with Trump during the campaign goes like this:

The answer is not all that credible: we know that Stone was calling Trump via multiple channels, including through Keith Schiller during campaign hours, for example. But nevertheless, Bannon claimed not to know anything about calls between Stone and Trump.

Still, right in the middle of sustaining that claim, Bannon told about a meeting that Stone apparently demanded in December 2016 to which he brought his book depicting how he claimed Trump had won — a book in which Stone would later be scrupulously careful not to claim credit for the victory — and, the interview describes, “possibly a folder and notes.”

At the time of that interview in October 2018, Mueller only had one witness we know of who had mentioned those notes: a former employee of Stone’s who had been told the file “was important and that no one should touch it.”

Given that this person worked for Stone through December 2016, the person’s description of Stone bringing the “file booklet” to a meeting at Trump Tower might even refer to the same meeting Bannon described, that five minute meeting that Trump had tried to avoid that Bannon had been ordered to attend, perhaps to serve as a witness and certainly as a way to ensure that Stone didn’t overstay his welcome.

But some weeks after the Bannon interview, a second witness would come forward and share, second-hand, that those notes were the contemporaneous notes that Stone kept of his “constant” communication with Trump during the campaign.

Curiously, Mueller’s team didn’t mention Bannon’s inconclusive reference to those notes when they obtained a warrant to search Stone’s homes for them just a week after a January 18, 2019 grand jury appearance by Bannon, and if they knew the December 2016 meeting to be the same one Stone’s employee mentioned, they didn’t let on in their warrant affidavit. Nor is there any public follow-up I’ve noticed in the Bannon interview notes (though the government is withholding a 302 from summer 2019 and probably one from before that grand jury appearance). The copy of Bannon’s grand jury transcript that Stone is so incensed about was redacted, but if Bannon were asked about the notes in that meeting, it would have had to have been disclosed to Stone in advance of the trial.

Stone is sure that Bannon got a pardon from Trump by blackmailing him.

The rat-fucker would certainly recognize the signs. Amid other forms of lobbying for a pardon, after all, Stone made three appearances that he knew Trump would see in which he made clear he could have avoided prison time if he had shared the content of the 36 conversations with Trump he had during the campaign (though the number varies), the conversations which we know Stone documented in that notebook.

And he is now accusing the guy who witnessed Stone presenting that record to Trump of likewise blackmailing Trump for a pardon.