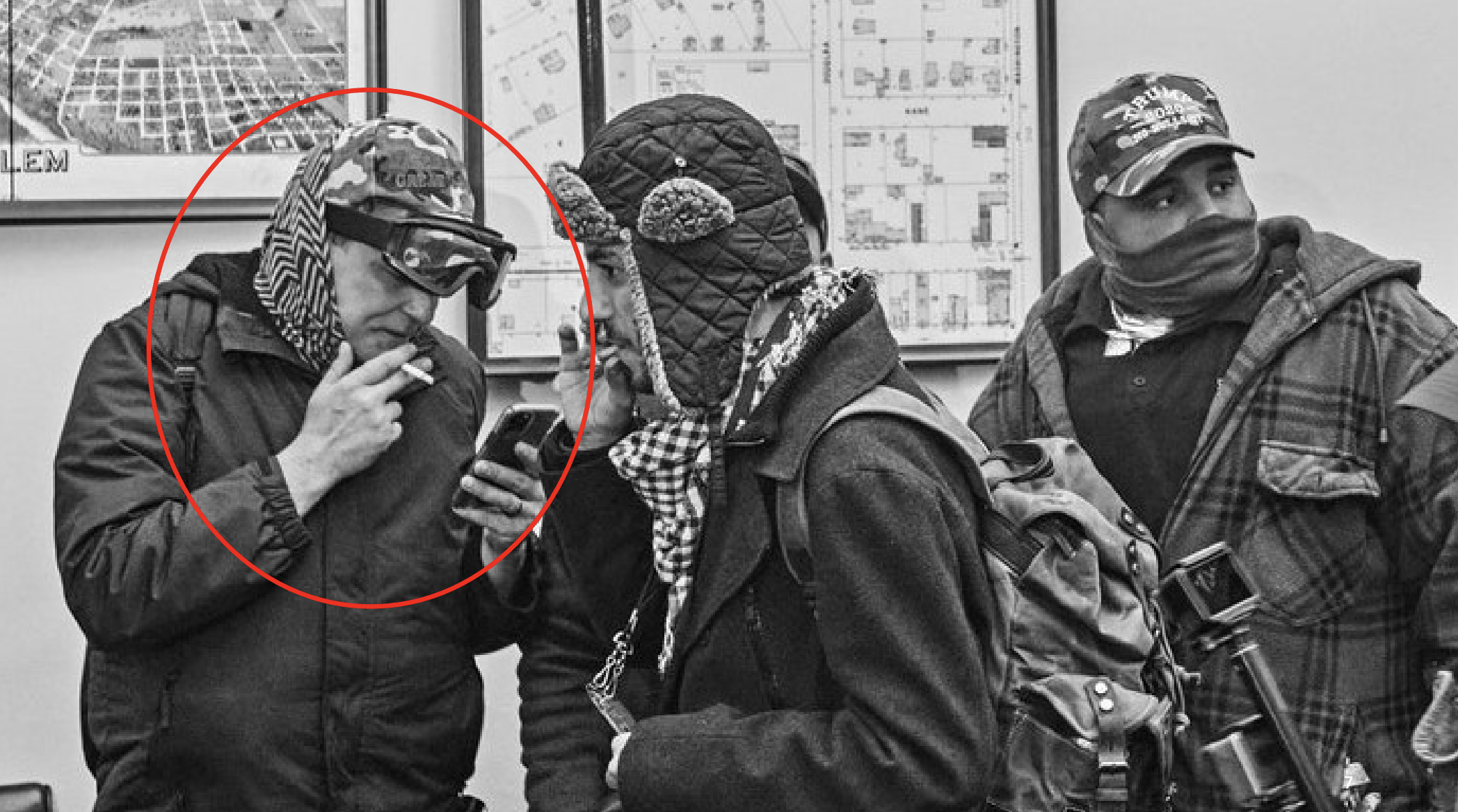 Since Jonathon Moseley has taken over as Zach Rehl’s defense attorney, he has filed a series of really ridiculous motions.

On Friday, according to a filing purporting to argue that Zach Rehl should be released on bail, FBI agents raided Whallon-Wolkind’s home.

Rehl’s attorney, Jonathon Moseley, claimed that because (he said), “Aaron Whallon-Wollkind did not join the events in the District of Columbia on January 6, 2021, whether the peaceful demonstrations or the violent attacks by a very, very few against U.S. Capitol Police … the Government has no basis for investigating or charging Whallon-Wollkind other than his connection to Zachary Rehl” [all three forms of emphasis Moseley’s], which in turn Moseley claimed was proof that the government still did not have any evidence against Rehl.

It’s a colossally stupid argument, almost as stupid as Moseley’s last two filings, in which he admitted that the Proud Boys “‘circle[d]’ (in a rectangle) the region around the Capitol to monitor the risk from counter-demonstrators,” an encirclement plan that had been publicly tied to obstructing the vote count in advance, and then argued that because Ali Alexander, a brown person who took credit for organizing the Stop the Steal rallies, had not been arrested yet, his [white] client should not have been either.

The government responded to these motions in two different filings yesterday. One motion opposed Rehl’s request for a Bill of Particulars, for discovery that (a table in the motion shows) DOJ has already provided, and for a Parler post that DOJ says doesn’t appear to exist. Another motion opposed Rehl’s bid to reopen his pre-trial detention.

The latter basically argues that all the ridiculous gaslighting Moseley is doing has not presented anything that was not known to Rehl when Tim Kelly last denied his motion for bail.

In his motion and the three supplements, the defendant raises no information that was both unknown to him at the time of the original detention litigation before this Court and that would have a material bearing on the detention decision. The Court should accordingly decline to reopen the detention hearing and should deny the defendant’s motion.

Along the way, the motion makes a point I keep making: the Proud Boy leaders keep excusing their actions by claiming some tie to Trump’s speech or a protest, except that they never went to his speech, heading instead to the Capitol to kick off a riot.

The defendant focuses on what the videos show of the Proud Boys’ activity prior to the breach of the Capitol grounds, and it focuses on two videos that were explicitly made for public consumption. The defendant’s reliance on the videos mentioned in the First Supplement moreover ignores the evidence of the conspirators’ coordinated actions immediately prior to, and again after the breach of the First Street barriers. The defendants arrived near the site of the Ellipse—where speeches were to occur—and then immediately marched to the Capitol away from the demonstration. The defendants were not there for a peaceful demonstration; they went to the Capitol to participate in a violent protest.

The Court should not accept Rehl’s invitation to conclude that the fact that the Capitol Police issued some permits negates his mens rea. See Mem. at 10-12. The defendant has not proffered that he knew of any permits issued or that he believed he was participating in a permitted demonstration when he rushed past trampled police barriers. If that is the defendant’s subjective memory, he certainly knew that on June 30. But setting that aside, any claim he makes now—for the first time nine months after the riot—that be believed he was participating in a permitted protest should carry no weight in the Court’s analysis, as those claims are belied by the fact that the defendant entered the grounds not at the site of any permitted protest, but through trampled police barriers.

The best proof of what defendants planned is what they did—and did not do—on January 6. They did not attend the demonstration at the Ellipse; they marched to the Capitol. And the defendant celebrated the group’s accomplishments and characterized it for what it was—violence and threatened violence to corruptly influence the vote of the American people.

The government motion scoffs at Rehl’s claim to support the cops, noting that a fundraiser Moseley pointed to in a supplement supporting his renewed bail request had been started the day he submitted the filing, and had raised no funds.

The defendant also proffers that he is the son and grandson of police officers and is a longtime supporter of the “back the blue” movement. E.g., Second Supplement at 3. This information, even if true, was known to him at the time of the June 30 hearing, and thus does not provide a reason to reopen the hearing. The fundraiser that the defendant allegedly set up “to raise money for any injured police officers,” see id., is not material to the Court’s detention analysis. According to an ICANN9 lookup, the domain name healcapitolpolice.com was registered on October 6, 2021—the same day that defendant filed the First Supplement referencing that website and the alleged fundraiser. As of October 15, 2021, that website redirects anyone who clicks on it to a GiveSendGo crowdfunding page that states that the campaign has raised $0 and “is currently disabled and can not receive new donations.”

It shows that because of the way Rehl’s lawyer submitted a Reuters article that (I’ve shown) misunderstood the investigation, it cut off a reference to Rehl and his co-conspirators.

The passage Moseley failed to include affirms that FBI had discovered the Proud Boys had a goal of breaking into the Capitol.

Stone, a veteran Republican operative and self-described “dirty trickster”, and Jones, founder of a conspiracy-driven radio show and webcast, are both allies of Trump and had been involved in pro-Trump events in Washington on Jan. 5, the day before the riot.

FBI investigators did find that cells of protesters, including followers of the far-right Oath Keepers and Proud Boys groups, had aimed to break into the Capitol. But they found no evidence that the groups had serious plans about what to do if they made it inside, the sources said.

But the most interesting part of the motion includes citation of multiple texts Rehl sent during the riot, which (the government claims) not only proves that Rehl lied in a previous filing about texting only his spouse from the riot, but shows he was providing a blow-by-blow account of the riot to four other people in which he stated, before Dominic Pezzola broke into the Capitol but after they had surged onto Capitol grounds, that “everyone raided the Capitol.”

In addition to the post-election rhetoric the Court cited in granting the government’s motion to revoke the magistrate’s release order, many of the defendant’s statements from January 6 and 7 underscore the government’s assertion that he possessed a criminal mens rea on January 6. For example, in contrast to defendant’s claim that “gathering at the U.S. Capitol was specifically authorized” by permit (Mem. at ¶ 55), shortly after defendant and his coconspirators had surged onto Capitol grounds, Rehl texted four other contacts, “Everyone raided the Capitol.” At the time that text was sent, 1:15 p.m., the defendant and his coconspirators had pushed into the West Plaza, but they were still approximately 30 minutes from beginning to push up the stairs to the Upper West Terrace. At 1:34 p.m., Rehl texted the same group, “We’re at a standstill, cops are dropping concussion bombs and pepper spraying, people are pepper spraying back and fighting riot cops.” At 2:29 p.m., after hordes of rioters had entered the building, defendant texted the same group, “Civil war started.”4 He followed at 2:48 p.m. with “They just broke all the doors and windows open, people are pouring in.”

The defendant’s statements after January 6 further underscore that the defendant’s focus on that day was not Antifa. On January 7, 2021, he texted the same group mentioned in the previous paragraph, “Trump basically conceded. We lost our country, we shoulda held the capital” and “Once Pence turned his back he was fucked, but was hoping we all sent a message yesterday, I guess that was the message to ben [sic] the knee, its depressing.” In a different Telegram chat on January 7, Rehl stated, “Looking back, it sucked, we shoulda held the capital. After [T]rump conceding today, it all seemed like a waste.” He continued, “The reason why it feels like a waste is because instead of all these politicians getting scared and realizing they need to answer for this fraud, they are all turning on Trump and cucking, they are doubling down on their actions. Everyone shoulda showed up armed and took the country back the right way,” and “I imagine the next time people aren’t showing up unarmed. I’m not trying to fed post, I’m just stating facts, normies turned on the cops man, we didn’t start any of the violence, all we did was a couple of chants.”

4 These text messages stand in contrast to the defendant’s assertion that he only texted his wife to let her know he was safe and that he only knew of the full scale of the attack at the time of the impeachment trial. See First Supplement at 8.

Zach Rehl described the riot on the Capitol that he and his co-conspirators kicked off as a “civil war.” That expresses a mens rea that goes well beyond simply trying to obstruct the vote count.