According to the Igor Danchenko indictment, John Durham does not claim to have interviewed the most important witness in the four false statements charges against Danchenko relating to Sergei Millian: Sergei Millian.

After laying out some of the facts behind the charges that accuse Danchenko of falsely telling the FBI on five occasions (just four of which are charged) that he received a call from someone he assumed to be Millian, who told him about ongoing communications between Trump and Russia, Durham notes that on Twitter, Millian has claimed that he and Danchenko never communicated directly.

Chamber President-1 has claimed in public statements and on social media that he never responded to DANCHEKNO’s [sic] emails, and that he and DANCHENKO never met or communicated.

Let me be clear: the filing of a report based off a call like the one Danchenko described, even assuming it exists, is dodgy as hell. I’m not defending that or arguing that Danchenko didn’t lie; I’ll wait for the trial on the latter point.

But it is astounding that Durham appears to have filed an indictment without ever requiring Millian to go on the record, under oath, particularly given all the evidence about Millian in DOJ’s coffers and some of the other things Millian has said online. If that’s what happened, it exactly replicates the sin that, Republicans wail, happened with the Steele dossier, taking the word of someone who once was under counterintelligence investigation (as Danchenko was years before his work on the dossier and Millian was in 2016), though does so here not just to obtain a FISA warrant, but to obtain an indictment.

Absent a great deal more evidence than what Durham describes here, I think these four counts will pose remarkable challenges for Durham’s prosecution (some of which I’ll explain in a follow-up, hopefully my last post on this indictment).

The general outline of the charge is that, starting with his very first interview, Danchenko attributed significant parts of this report to Millian, whom the FBI referred to as “Source 6”:

a well-developed conspiracy of co-operation between them and the Russian leadership. This was managed on the TRUMP side by the Republican candidates campaign manager, Paul MANAFORT, who was using foreign policy advisor Carter PAGE, and others as intermediaries. The two sides had a mutual interest in defeating Democratic presidential candidate Hillary CLINTON, whom President PUTIN apparently both hated and feared.

Danchenko never described this exchange as anything but sketchy and by his description, he claimed Steele overstated the claim. Here’s how it appeared the first time:

This report involves reporting from “Source E” — reporting which [Danchenko] ties, at least in part, to [Millian]. [Danchenko related the story about his contact with [Millian], in either late June or July 2016. [redacted] — he reached out to [a Novosti journalist]. He asked [the journalist who had written about Millian] some of the questions Orbis had tasked him with regarding Trump’s Russian connections, and [the journalist] put him in contact with another of his [redacted] colleagues, [USPER 2]. [The journalist] said that [USPER2] had [Millian’s] contact information, and that [Millian] was someone with whom [Danchenko] should speak. [Millian] was, according to [Danchenko], someone with whom “they” [redacted] were talking. There was even talk about [Danchenko] meeting with [USPER2] in person, but it did not happen.

[Danchenko] reached out to [Millian] via email twice. He never received a response from the first attempt, but after the second attempt, he received in circa late [redacted] 2016 a very strange phone call from a Russian male who he believed to be [Millian], but who never identified himself. The individual on the other end of the call never identified himself. The two of them talked for a bit, and the two of them tentatively agreed to meet in person in [NY] at the end of July. At the end of July, [Danchenko] traveled with [redacted] to [New York], but the meeting never took place and no one ever called [Danchenko] back. Altogether, he had only a single phone call with an individual he thought to be [Millian]. The call was either a cellular call, or it was a communication through a phone app. [Danchenko will look back at his phone to see if he can get caller information].

The following day, as he did with a few other allegations he explained in the first day of a serial interview, Danchenko provided more details, some of them additional details — such as that he met the Novosti journalist who first directed him to contact Millian at a Thai restaurant — and some clarifications, such as that one email was June or July and a follow-up was September (which was incorrect; it was late August). That clarification, however, should have alerted the FBI that the timeline of this explanation didn’t work, as it would put the claimed phone call before the second email.

As he had the previous day, Danchenko offered to pull up his communications to provide more details about this, making it clear that he had not yet done so. Obviously, DOJ ultimately did obtain the emails Danchenko exchanged with Millian and the Novosti journalists, because they are one of the only pieces of proof offered in the indictment for these charges.

Durham didn’t charge this January 2017 instance of what he claims was a lie, perhaps because the FBI came away from that interview believing that Danchenko was, “truthful and cooperative,” probably in part because Danchenko had clarified that the report was overblown.

Instead, Durham charged four other interviews in which Danchenko told the same story: March 16, May 18, October 24, and November 16, 2017, the latter two of which post-dated a Steele interview with the DOJ. 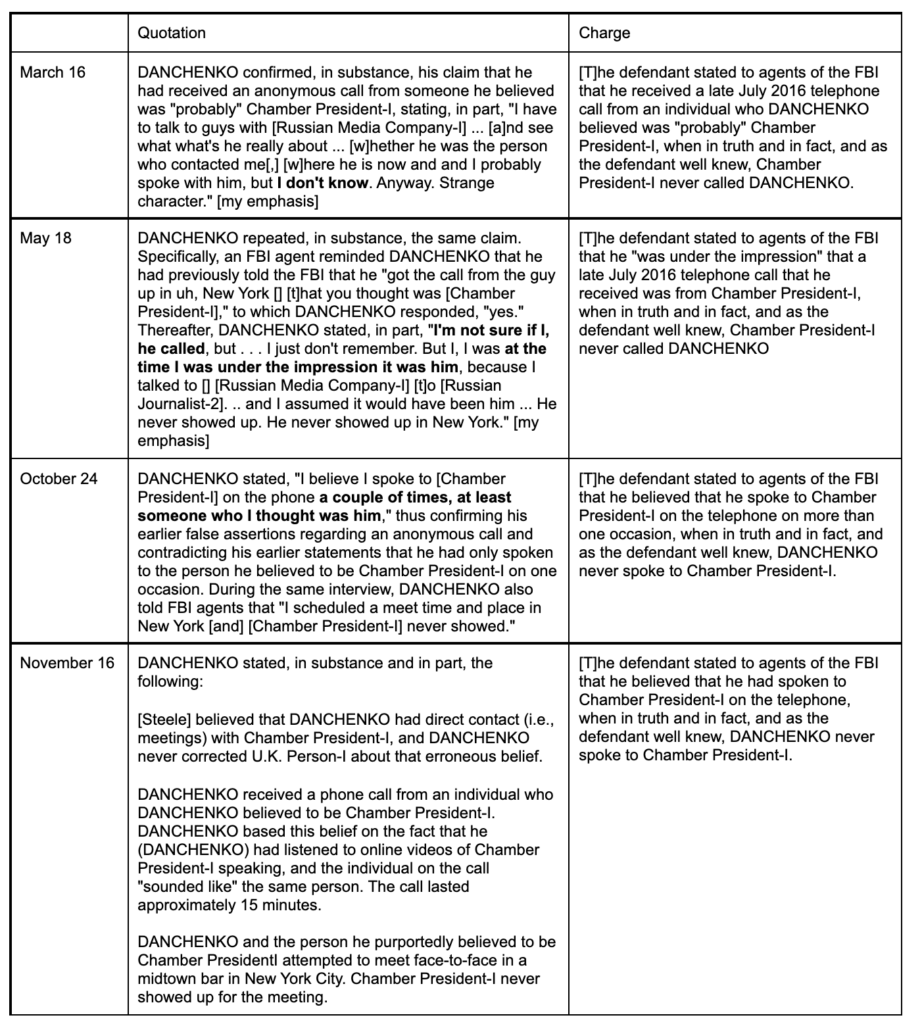 In each instance where Durham quotes Danchenko’s actual words (he doesn’t quote much from the November 16 instance and Durham doesn’t claim that interview was recorded, as the March and May ones were), Durham eliminates a caveat Danchenko made in the interview when describing the alleged lie in the actual charge — “I don’t know,” I’m not sure if I, he called … at the time I was under the impression it was him,” “at least someone who I thought was him” — maintaining a consistent pattern, on Durham’s part, of making material omissions in indictments charging material omissions. He treats a likely inadvertent misstatement from October 24 — that Danchenko believed he spoke to Millian a couple of times — as a lie unto itself.

This is the action of a prosecutor who is either throwing a tantrum, or someone who is uncertain of his own charges, and so is ensuring he gets multiple shots at proving an alleged lie by charging it in four different ways (perhaps hoping he can get Danchenko on his statement that he believed he spoke to Millian a couple of times).

As noted, Durham doesn’t claim to have testimony from Sergei Millian, beyond Millian spouting off on the Internet.

Durham also doesn’t properly account for the fact that Danchenko’s belief that this was Millian in July 2016, which is how the report in question was sourced, would easily have been different than his belief in August 2016, when he sent a follow-up email to Millian, and different still in a series of interviews in 2017, which makes his omission of Danchenko’s caveats on that point all the more problematic.

He similarly doesn’t commit to whether he believes Danchenko made up the entire phone call and attempted meeting in New York (Durham did not, for example, charge Danchenko with fraud for billing poor Christopher Steele for claiming he tried to meet a suspected source when, instead, he was on a jaunt to the Bronx Zoo), or whether he believes someone else called Danchenko, knowing precisely the information Danchenko was looking for, and provided — at least according to Danchenko’s description — accurate information that reflected some knowledge of ongoing contacts between Trump and the Russians.

Again, given that there are no records about what Danchenko told Steele and given their conflicting testimony, he likely can’t know what the truth is (even assuming he’s right that Millian did not call Danchenko, a claim he doesn’t claim to have gotten Millian to assert under oath).

Danchenko replaced his phone before any of these FBI interviews, so unless FBI found a way to retrieve it and managed to reconstruct contents after a factory reset, it’s not clear Durham can rule out a Signal call.

The proof that Durham offers that this is a lie is that, after the failed (claimed) attempt to meet in New York, Danchenko sent an August 18 email to Millian that reflected no prior direct communication, and an August 24, 2016 email to one of the Novosti journalists stating that,

for some reason [Millian] doesn’t respond.

Would you be able to ask him to reply to me? I could call or write on Linkedln, but until he responds I would not like to pester him.

It will be a cinch for Danchenko to explain away both of these communications.

Durham doesn’t mention a claim Danchenko made about a conversation he had with the Novosti journalists after the first attempted contact, who told Danchenko that Millian asked them about Danchenko, something that might either corroborate Danchenko’s claimed belief or provide other explanations for the claimed call.

The only other proof that Durham offers in the indictment (it’s possible he will try to bring in communications involving Fusion, except the timing of Fusion’s actual obsessions about Millian are not entirely helpful on that front, and unless and until he finally charges the conspiracy he seems to want to charge, it’s not clear he’ll be able to introduce communications to which Danchenko was not a party) is that Steele had a differing understanding of what happened than Danchenko; there’s abundant evidence both men were fluffing their work for the actual content of the dossier, making it difficult to identify where a game of telephone ended and where actual knowing lies began. Significantly, Durham offers evidence that Danchenko freely admitted to not correcting Steele on whether he actually met or attempted to meet Millian; he offers no evidence that Danchenko affirmatively lied to Steele about whether he met Millian or not.

Sergei Millian was designated Source 6 in the FBI’s attempts to vet Danchenko’s contributions. And now Durham is prosecuting Danchenko based off Twitter evidence, a clear invitation for a significant Sixth Amendment challenge on Danchenko’s part.

Update: On Twitter, Millian (whose tweets are now admissible before EDVA, thanks to John Durham) is making it clear he doesn’t understand the significance of due process and the Sixth Amendment. He even seems to think that the fact that he now claims to be something something independent reporter means that his public statements (and a good deal of what the US government has in its possession) won’t be discoverable to Danchenko. 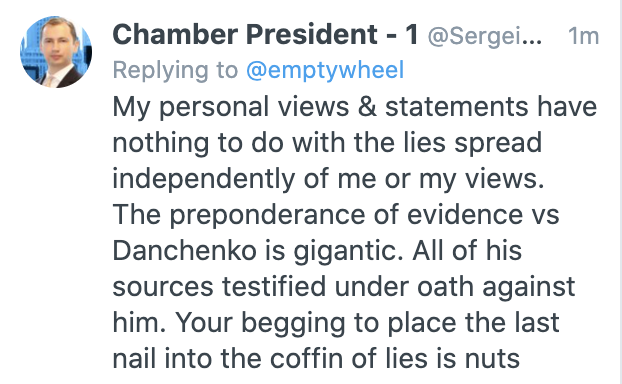 Millian repeatedly dodged my question about whether he had been interviewed, much less under oath.

Daisy-Chain: The FBI Appears to Have Asked Danchenko Whether Dolan Was a Source... Three Things: No, No, and Hell to the NO, NYT