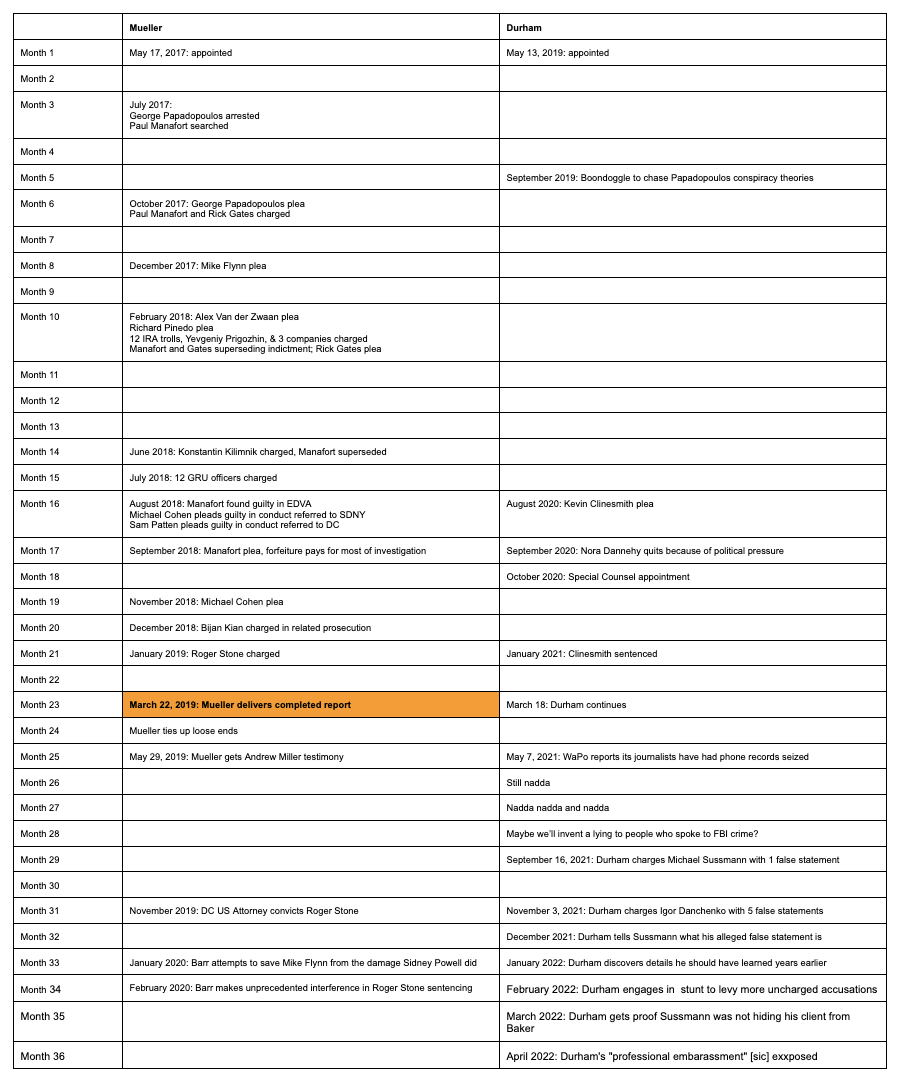 As Sussmann shows, when Durham submitted his original (timely) 404(b) notice on March 18, he said he was going to submit proof that Sussmann had failed to preserve texts he sent on his personal phone.

IV. The Defendant’s Failure to Preserve Firm Records During the Relevant Time Period

All Perkins Coie attorneys are required to maintain and preserve all firm records and communications that might exist on the attorney’s personal devices. This past week the government learned that, in connection with his departure from Perkins Coie, the defendant was required to turn over all communications constituting firm records that were contained on his personal devices. The evidence at trial will show that the earliest text messages turned over by the defendant date from November 25, 2016. There are extensive gaps in time for which no text messages were provided. The government is in possession of relevant text messages that the defendant exchanged during these time periods, including highly probative messages between the defendant and then-FBI General Counsel Baker.

Durham repeated and expanded the allegation in what he called his “supplemental” 404(b) notice, submitted late on March 23, which was actually an attempt to expand the scope of his initial notice and add two more items to it. In the interim five days, this allegation became proof — in the Durham team’s conspiracy-addled and typo-riddled brains — that Sussmann was intentionally trying to hide the text he sent James Baker setting up his September 19, 2016 meeting that Durham hadn’t found in time to charge Sussmann for lying on September 18, not September 19.

VI. The Defendant’s Failure to Preserve Firm Records During the Relevant Time Period

The defendant’s failure to preserve relevant law firm records and/or provide them to Law Firm-1 upon his departure is similarly relevant to prove the defendant’s “motive,” “knowledge,” “intent,” and “plan.” The defendant’s failure to provide these records to his employer prevented Law Firm-1 from learning about specific, highly relevant communications – including a September 18, 2016 text message containing substantially the same false statement as the one alleged in the Indictment. The defendant’s failure to preserve and provide such records supports the inference that the defendant had “knowledge” that his electronic communiations [sic] would incriminate him and, therefore, acted intentionally to conceal them. Such evidence also tends to support the inference that the defendant harbored a specific “motive” to conceal his communications, namely, to avoid criminal liability or professional embarassment. [sic] When combined with other evidence, these failures by the defendant also support an inference that the defendant intentionally executed a “plan” over time to conceal the involvement of particular clients in his work, and to prevent the discovery of evidence reflecting his own false statements on that subject.

Durham didn’t find that September 18 text until this year, as part of a two step process to find evidence pertaining to his star witness he hadn’t even sought before indicting Sussmann. In the first step, Durham finally got around to collecting evidence from Michael Horowitz and only then learned that DOJ IG had a Baker phone that Durham had been told about years ago but forgot about.

But it gets worse! As Sussmann revealed in his original 404(b) response that only got docketed on Friday, after discovering two of Baker’s FBI phones more than three months after he charged Sussmann, Durham only then asked Baker to check the cloud for his own text messages involving Sussmann. Among the things Baker provided in response were texts that showed Sussmann indicating to Baker in the days after their meeting that he had to check with someone — Rodney Joffe — before helping Baker kill the NYT story.

In other words, almost six months after charging Sussmann, Durham got around to obtaining proof that, in fact, Sussmann was not hiding the existence of a client, not to mention that the explanation he provided HPSCI in 2018 — that he wanted to give the FBI options, one of which (killing the NYT story) they took — was absolutely true.

He also obtained proof that the guy who hired Durham has been gunning for Sussmann for years — and that his star witness knew about it.

So, in response to the “professional embarassment” [sic] of having to admit that Durham had never subpoenaed his own star witness who — years earlier — a Durham-related investigator had deemed unreliable, Durham instead accused Sussmann of obstructing justice by getting a new phone. Crazier still, he leveled that accusation without first obtaining Perkins Coie’s retention policy before accusing Sussmann.

In response to the accusation, Sussmann himself subpoenaed the policy, which showed that the policy only applied to email and specifically excluded communications about scheduling a meeting like the September 18 text in question.

Subsequently, the defense issued a subpoena to Perkins Coie; obtained the relevant policies; and confirmed that none of those policies addressed text messages, let alone required their preservation. Instead, those policies—which govern the “retention and destruction” of client records—make clear that only significant client communications must be retained, and that electronic communications concerning scheduling do not satisfy the relevant definition of “significant communication.”

The policy explicitly provides that emails regarding scheduling, for example, do not rise to the level of a “significant communication” and would not, therefore, trigger the policy’s retention requirements. Id. Thus even if the policy applied to text messages—and it did not—the policy would not have required Mr. Sussmann to preserve copies of his text messages with Mr. Baker.

[T]he Special Counsel’s willingness to level this explosive allegation without even bothering to first obtain copies of the relevant Perkins Coie policies they accuse Mr. Sussmann of violating— policies that, on their face, do not require the preservation of the texts at issue—is nothing short of shocking.

As Sussmann noted in his Friday submission, effectively Durham forced Sussmann and Judge Christopher Cooper to then conduct the investigative steps that Durham should have taken before making baseless accusations to cover up his own investigative failures.

By context, it appears that Durham has dropped his plan to accuse Sussmann of obstructing an investigation because — within weeks of an election in which his client was persistently hacked by Russia — he replaced his cell phone. (Note, Roger Stone also replaced a cell phone with highly relevant evidence on it in the days after the 2016 election — such as how much of the plan to pardon Julian Assange took place in advance of Assange releasing the John Podesta emails — and as far as I know, Durham’s predecessor as Special Counsel never considered charging him for obtaining a new phone.)

What remains of this incident, then, is just the “professional embarassment” [sic] of getting caught making accusations without adequately investigating those accusations first, as well as exculpatory texts that prove Sussmann was not hiding the existence of a client from the FBI.

This is not the first time that Durham has risked “professional embarassment” [sic] by making accusations before investigating them. Including the Baker-related failures laid out here, here are some of the investigative steps Durham did not take before accusing Sussmann of lying to cover up a plot involving Hillary Clinton to manufacture dirt on Donald Trump:

I suspect there is far more, including never checking DOJ records to learn that someone totally unrelated to the Democrats was pushing the NYT story more aggressively than Sussmann in the period in question, to say nothing of all the evidence showing that April Lorenzen’s suspicions that Trump’s campaign manager was money laundering payments from oligarchs close to Putin were absolutely correct.

As of Wednesday, Durham’s investigation entered its 36th month. The “professional embarassment” [sic] has been going on so long, it’s hard to even capture it all anymore (but here’s a more accessible version). What’s clear is that every time he finds exculpatory information he should have obtained before charging Sussmann, he doubles down on his conspiracy theories — an approach that’s bound to lead to more “professional embarassment” [sic] down the line.

Update: Clarified that according to the documents filed Friday, Durham only obtained the September 18, 2016 text on March 4. Also fixed my own “embarassing” [sic] typo in the table below. 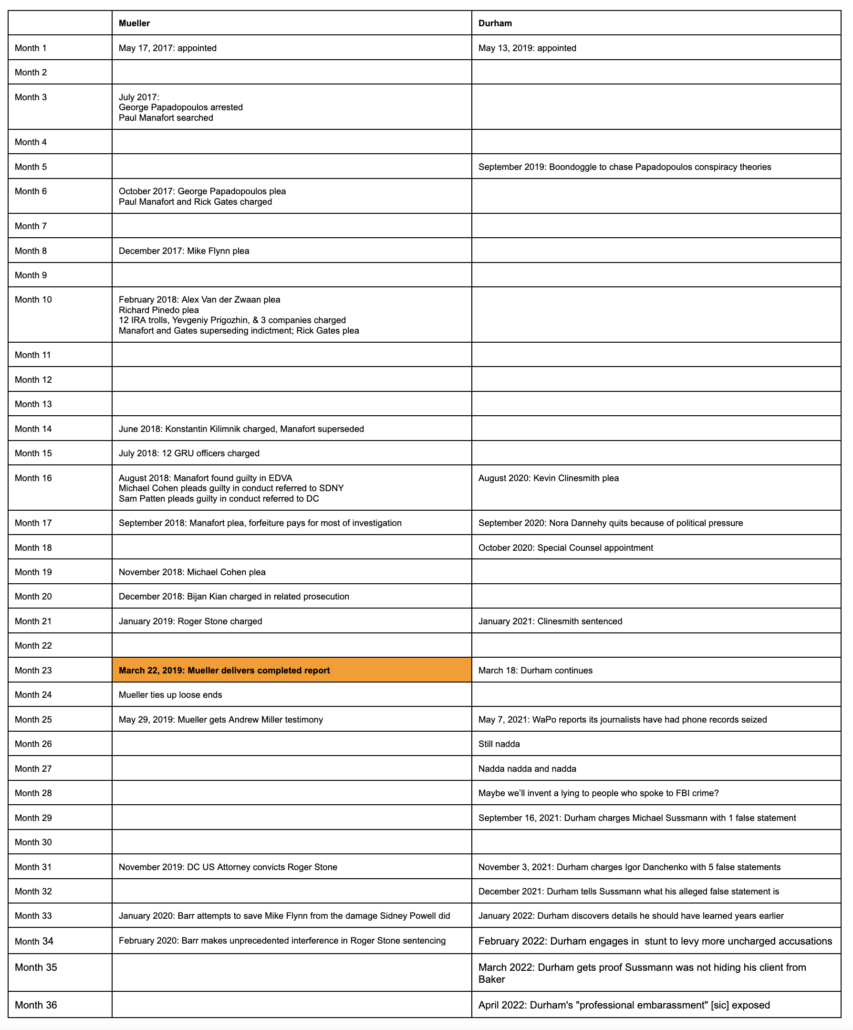