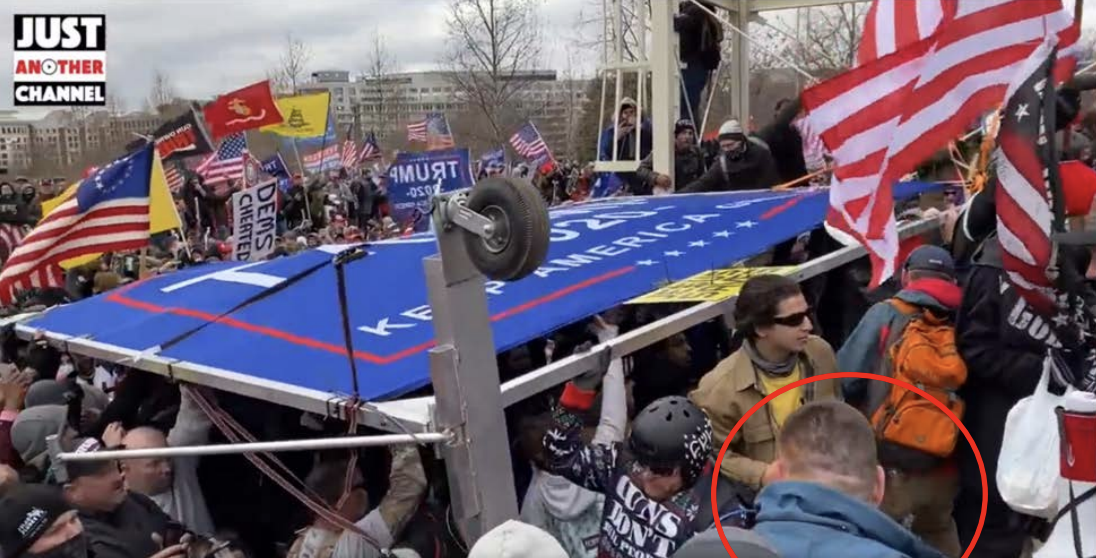 Unless you’re a really avid reader of this site, you’ve likely never heard of him. He’s just a QAnoner from Pennsylvania who planned with his buddy Brad Smith to arm themselves, with a club and a knife, respectively, and head to DC in response to Trump’s call.

The assault that Neefe pled to was, as part of a mob, using a very large Trump sign to push cops off their defensive line.

On the Capitol grounds, NEEFE and SMITH participated in hoisting and pushing a large metal sign frame holding a oversized “TRUMP” sign into a defensive line of Metropolitan Police Department (“MPD”) and USCP officers attempting to prevent rioters from further advancing on the West Front plaza of the Capitol. NEEFE understood and admits that at all times, these officers qualified as federal law enforcement officers and were engaged in performance of their official duties. The all-metal sign frame was approximately at least eight feet tall and 10 feet wide, welded with screws, and supported by large casters that were approximately the size of a man’s head. As described by one USCP officer who was part of the defensive line, the sign frame was heavy and it took at least 15 officers to carry the sign away after the rioters thrust into their line.

As part of his plea, Neefe didn’t plead guilty to 18 USC 111(b), using a deadly weapon. But his sentencing guidelines do treat the very large Donald Trump sign as a dangerous weapon. 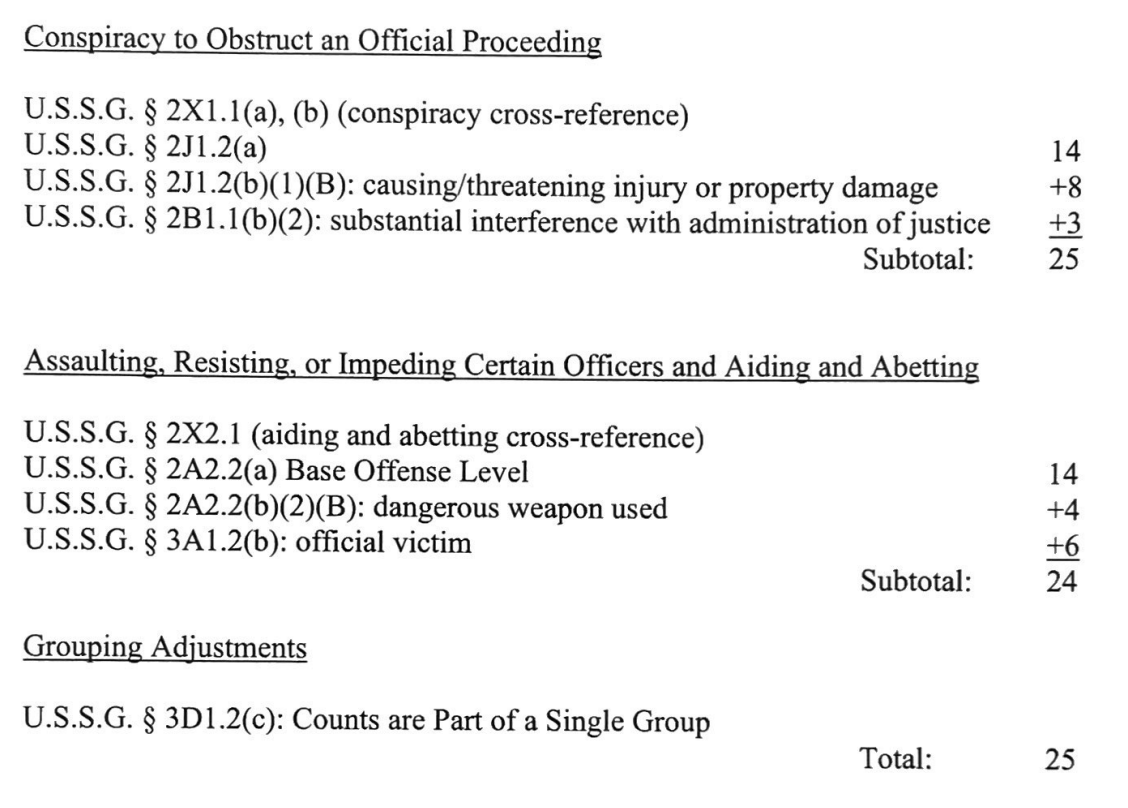 Neefe is by no means the only one charged with assaulting cops with a very large Donald Trump sign.

But it’s significant, in this case, because of the way the conspiracy against Neefe and Smith was charged.

Neefe and Smith, like several of the other “lesser conspiracies” charged against non-militia members, started conspiring to participate in an insurrection in direct response to Trump’s own statements.

While both spoke in revolutionary terms immediately after the election, they viewed what is almost certainly Trump’s December 19 tweet as a direct call to action. Smith even called it a call to action on December 22.

SMITH: The call to action was put out to be in DC on January 6th from the Don himself. The reason is that’s the day pence counts them up and if the entire city is full of trump supporters it will stop the for sure riots from burning down the city at least for awhile.

SMITH: Yeah I”m going 100%. This is way more important than the last one actually. This one’s literally to save the city from chaos while they do their thing in the capital [typos original]

Smith also tried to recruit others to join them, citing (as other accused Jan6ers were in the same period) Trump’s orders as uniquely explicit.

Hey man if you wanna go down to DC on the 6th Trump is asking everyone to go. That’s the day Pence counts up the votes and they need supporters to fill the streets so when they refuse to back down the city doesn’t burn down right away. It’s the only time hes ever specifically asked people to show up. He didn’t say that’s why  but it’s obviously why.

Somehow (how is of particular interest to me, given Smith’s apparent reference to one of the earlier rallies for Trump in DC), Smith’s understanding of the plan changed by December 31, when he raised storming the buildings with Neefe.

I cant wait for DC! Apparently it’s going to be WAY bigger lol. If it’s big enough we should all just storm the buildings. . . . Seriously. I was talking to my Dad about how easy that would be with enough people.

Smith continued to try to recruit others to come storm the buildings with him.

Take off the 6th man! It’s the Big one!!! Trump is literally calling people to DC in a show of force. Militias will be there and if there’s enough people they may fucking storm the buildings and take out the trash right there.

And the day before the attack, Smith called to, “Sacrifice the Senate!!!!!”

In the aftermath, both Smith and Neefe referenced Pence to explain their actions. “Then we heard the news on pence,” Neefe posted, “Amd  [sic] lost it …. So we stormed.” Smith, probably writing before Congress completed certification in the early hours of the morning on January 7, claimed that, “Pence cucked like we knew he would but that was an Unbelievable show of force and it did its job.”

All of which is to say that the very large Trump sign in Neefe’s guilty plea is more than symbolic. These totally random dudes took Trump’s call to violence as an order. They armed themselves, came to DC having at least considered taking over buildings, and did so explicitly in response to the demands Trump made of Pence.

In the context of the conspiracy, as charged, this largely meets the terms Amit Mehta laid out when ruling it plausible that Trump entered into a conspiracy with the Proud Boys and Oath Keepers. “He knew the respective roles of the conspirators: his was to encourage the use of force, intimidation, or threats to thwart the Certification from proceeding.” Indeed, they even fit the framework Mehta laid out when deeming it plausible that Trump aided and abetted assaults — like the one using a very large Trump sign — on cops at the Capitol.

As noted, this conspiracy was charged under 18 USC 1512(k), meaning the sentence can be enhanced — as the guidelines have been, with Neefe — because of the use of threats. With this guilty plea, Trump may literally be on the hook for conspiring to obstruct the vote certification via his joint liability in using that very large Trump sign as a weapon to prevent the certification of Joe Biden’s win.

Chad Wolf Covered Up Russia’s 2020 Support for Trump WaPo Polls Whether Trump Should Be Charged Without Polling His Most Serious...