Don’t Analyze Trump Legal Filings Based on the Law, Analyze Them Based on Power 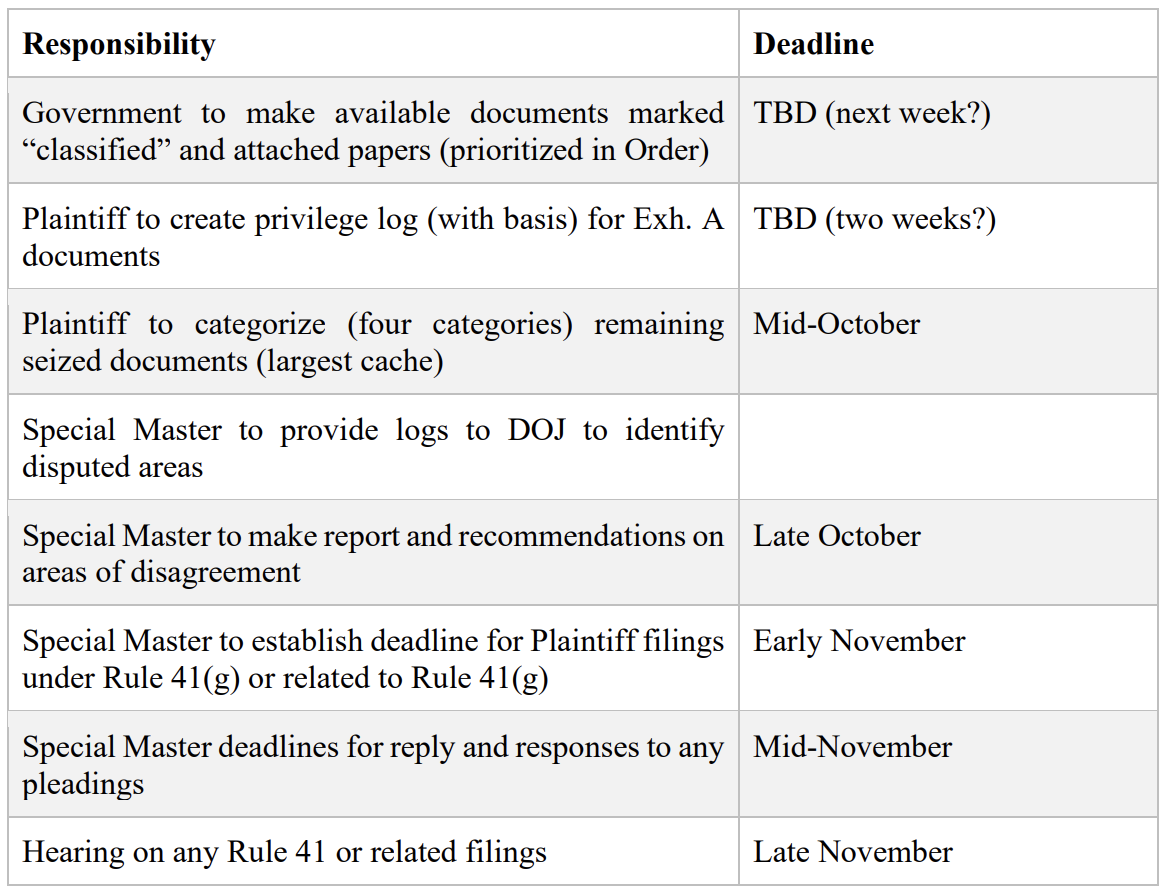 I think people are making a grave mistake of applying principles of law to Trump’s legal maneuvering.

Trump’s lawyers are not making arguments about law.

If there were lawyers concerned about principles of justice participating in his defense, they’d be stridently advising him to work on a plea deal admitting guilt to 18 USC 2071, removing government documents, maybe even agreeing to the probably unconstitutional part of the law that would prohibit him from running for President again, in exchange for removing the more serious 18 USC 793 and 1519 charges from consideration. Such a plea deal is never going to happen. Win or lose, Trump is pursuing power, not adjudication under the law, not even recognition of the law.

One way you can be certain about that is because Evan Corcoran, who got his and Steve Bannon’s asses handed to them in Carl Nichols’ courtroom making legally ridiculous arguments that treat Executive Privilege as a theory of impunity applicable to everyone who is loyal to Trump, has taken from that setback not that his claims about Executive Privilege are ignorant and wrong. Instead, he has doubled down on that approach with Eric Herschmann (and probably the Two Pats, Cipollone and Philbin), undoubtedly believing that so long as he can delay the time until Bannon reports to prison and Trump’s former White House Counsels testify about what really went down on January 6, his people can reclaim Executive authority and make all this go away.

He’s definitely not wrong that he can delay the time until Bannon is jailed, and he may not be wrong about the rest of it.

Four years ago last week, Paul Manafort entered into a plea agreement with Mueller’s team and then promptly started lying about matters to which he had already confessed to get the plea deal in the first place. Manafort managed to sustain the appearance of cooperation through the mid-term election, after which Trump took action that would have been politically problematic before it — firing Jeff Sessions and hiring Billy Barr. Amy Berman Jackson ruled that Manafort had lied during his plea deal. But it didn’t matter. Trump and Barr spent the next two years erasing every legal judgment against him and the Trump flunkies that had remained loyal, erasing Manafort’s conviction and even his forfeiture. They erased a good deal of evidence that he conspired with Russia to get elected in the process. In the end, everyone who played a part in this process ended up better off — in significant part because the process, especially Barr’s part in it, has never been fully reported for what it was. Trump even used the ensuing process of discrediting the Russian investigation as a means to train Republicans — along with likely Fox viewers like Aileen Cannon — to believe he was mistreated in the Russian investigation, when the opposite is the case.

Along the way, Trump did grave damage to rule of law and undermined trust in US institutions. For him, that was a side benefit of the process, but a very important and lasting benefit, indeed.

He’s undoubtedly trying to play the same trick again: Stall the investigation past the election, and then (seemingly confident that Republicans will win at least one house of Congress, by democracy or by deceit) flip the entire investigation into yet another example where Trump has not flouted the law, but instead the law has failed to recognize Trump’s impunity from it.

Consider the analysis of Trump’s objections to Judge Raymond Dearie’s draft Special Master plan. As noted, Trump wailed about two things: that Dearie asked whether Judge Aileen Cannon’s inclusion of any Rule 41(g) claims (which is basically a legal way to demand property back before an indictment) in her order accorded with law and asked Trump to provide a list of the documents he claims to have declassified.

[W]e are concerned that it contemplates resolving issues that were not raised by Judge Cannon in her order, her order denying the stay, or oral argument. Specifically, Judge Cannon was aware of the likelihood of eventual Rule 41(g) litigation and established a process by which the Special Master would evaluate any such claims before reporting and recommending to the Court. While the Plaintiff is, of course, willing to brief anything ordered by the Court under the auspices of the Special Master, we are concerned that the Draft Plan directs the Plaintiff to address whether Rule 41(g) litigation should be litigated under Case No. 9:22-MJ-08332-BER. The Plaintiff respectfully sees no indication the District Court planned to carve out related litigation for a merits determination by the issuing magistrate for the warrant in question. Most importantly, none of the District Court’s Orders have ever indicated that this was even a consideration.

Similarly, the Draft Plan requires that the Plaintiff disclose specific information regarding declassification to the Court and to the Government. We respectfully submit that the time and place for affidavits or declarations would be in connection with a Rule 41 motion that specifically alleges declassification as a component of its argument for return of property. Otherwise, the Special Master process will have forced the Plaintiff to fully and specifically disclose a defense to the merits of any subsequent indictment without such a requirement being evident in the District Court’s order.

Virtually everyone has suggested that the reason that Trump is balking at the order to tell Dearie which documents he declassified is because his lawyers want to avoid lying and they know Trump hasn’t declassified any of these documents. Such observations apparently apply even to Evan Corcoran, who (according to the NYT) suckered Christina Bobb into signing a declaration he wrote about a search he had done that claimed a diligent search was done that has since been proven not to be a diligent search.

Suffice it to say I’m skeptical that these lawyers — at least some of them — would be averse to filing a declaration saying, “Our client tells us he declassified it all,” if it would serve Trump’s purposes. All the more so given that none of them were in a position to know whether Trump declassified them all or not, and Trump not only doesn’t care whether he lies to his lawyers, he’s probably constitutionally incapable of doing anything but.

That’s not the reason why they’re balking about Dearie’s request for a list of documents Trump declassified. 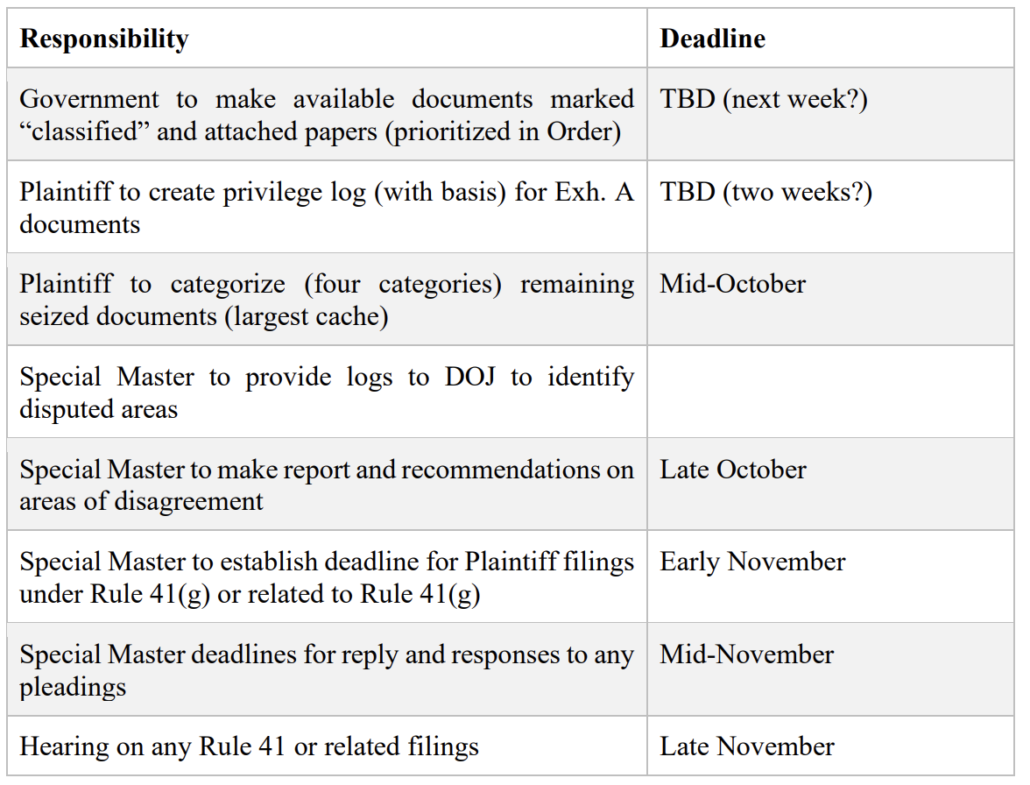 This schedule ensures that key decisions come to a head in mid-November, after the election.

Trump’s goal here is not any final determinations from Dearie (absent a determination that the FBI was mean to Trump just like they were to Carter Page). Cannon’s order fairly obviously invites Trump to contest Dearie’s ultimate decisions so she can de novo decide the issues. Trump’s goal is undoubtedly (because it always is) to create conflict, to sow an invented narrative that DOJ is out to get him. And Trump’s optimal outcome is not necessarily even that Cannon will say Trump declassified all these documents, including some of the Intelligence Community’s crown jewels. Such a proposition might even piss off a few of the Republicans who’ve not entirely lost their mind, until such time as Trump convinces them through the process of repetition and demonization that the IC should never have been spying on (say) Russia in the first place.

Trump’s goal here is to sustain the conflict until such time as Jim Jordan can save him, and the two of them can resume their frontal assault on rule of law again.

All Cannon needs to do to serve that end is at some point, after the election, declare that Trump’s claims about classification, even if incorrect and foolish, are reasonable for a former President. That’s all it would take to make it prohibitively difficult for future prosecutors to indict the 793 charges. This is the same way Barr made it prohibitively difficult for prosecutors to charge outstanding Mueller charges, notwithstanding the number of self-imagined liberals who blame Merrick Garland for that damage.

He wants the classified documents shared with his team — none of whom currently has the requisite clearance — this week. Only after that does he want to create the privilege log for the 64 documents his lawyers have had for four days; he wants another two weeks (so 18 days out of a 75 day process, total) before he makes such privilege determinations.

To be fair, that may be what Judge Cannon intended, too. She, meanwhile, will have to review at least one protective order this week, and may use that as further opportunity to muck in the process, to reinforce her demand that DOJ start the process of sharing classified documents even before the 11th Circuit weighs in.

There are probably two very good reasons why Trump wants classified documents in hand before they make any privilege claim. First because (as I have repeatedly pointed out), Cannon used those potentially privileged documents as the harm she hung her authority to wade in on. If Dearie rules that — as DOJ has repeatedly claimed — these documents were pulled out not because they really are privileged, but only because they set the bar for potential privilege so low as to ensure nothing was reviewed, then it takes one of the three harms that Cannon has manufactured off the table. Every time a claimed harm is taken off the table, another basis for Cannon’s power grab, and another basis from which to claim conflict, is eliminated.

Trump needs to forestall that from happening until such time as he has created more conflict, more claimed injury.

The other reason, I suspect, that Trump wants the classified documents in hand before the potentially privileged documents is because he knows that some of the classified documents he stole involve either his White House Counsel (which would be the case if documents pertaining to his Perfect Phone Call with Volodymyr Zelenskyy were in the stash) or his Attorney General (which might be the case with the clemency for Roger Stone). DOJ has always limited its comments about attorney-client privilege to those involving Trump’s personal lawyers, and that approach has continued since then, even in their motion for a stay before the 11th Circuit. They’re not wrong on the law: classified documents involving White House or DOJ lawyers are obviously government documents. But that wouldn’t prevent Trump from claiming they are privileged (or Cannon agreeing with him on that point).

It doesn’t have to be true or legally sound. It needs to be a conflict that can be sustained long enough to let Cannon decide, and decide in such a way that Trump keeps claiming he’s the victim.

Like I said, Corcoran may not be wrong that this will work. A lot depends on what the 11th Circuit decides. But a lot, too, depends on commentators continuing to treat this as a good faith legal dispute when instead it’s just more manufactured conflict.