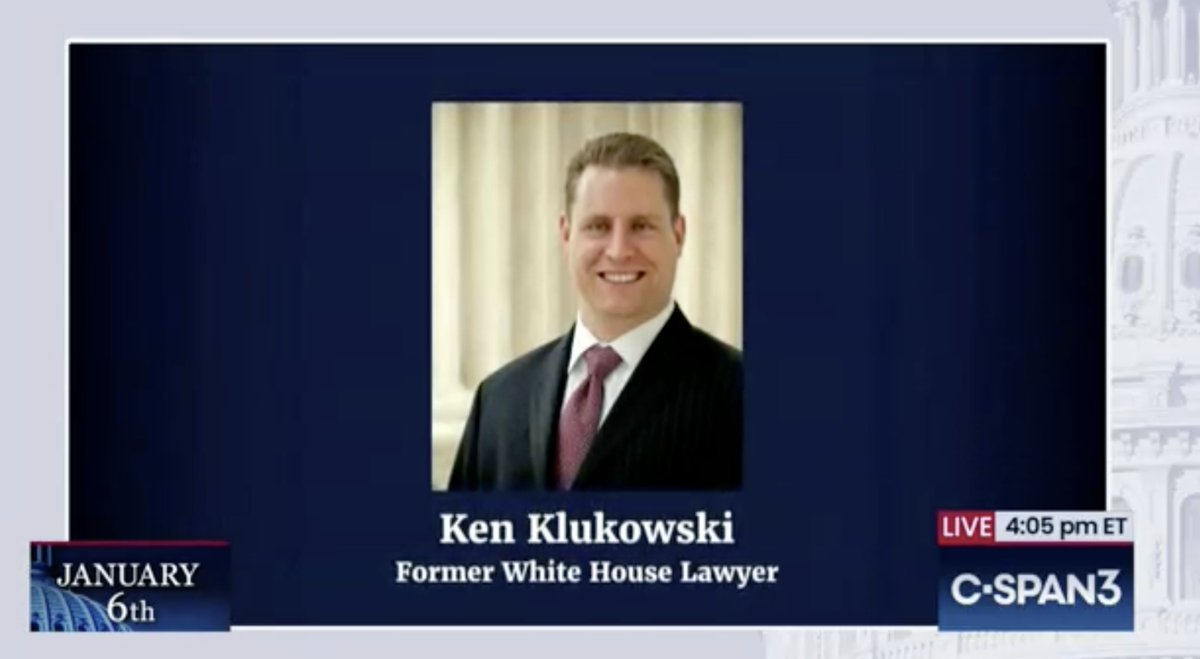 I’m going to attempt to do a live post mapping what we’re learning from the January 6 Committee investigation onto what we know about the multi-prong DOJ investigations. Before I do so, however, I want to point out several ways this matters, by showing how the multiple investigations intersect and how testimony to J6C may be useful for DOJ.

I raised one example in this thread on Ken Klukowski, the lawyer who wrote the memo associated with John Eastman and Jeffrey Clark meant to justify a late-December DOJ intervention in Georgia. Klukowski is one of four people (and three lawyers) involved in a grand jury proceeding partially unsealed in December. By May 2022, DOJ had shown probable cause that one of his email accounts would include evidence of a crime, but DOJ also spent much of last summer working through the dicey privilege problems posed by an investigation involving a bunch of lawyers.

We now know the grand jury matters were unsealed after such time as DOJ first got some of the J6C transcripts, per this filing in the Proud Boys case, which shows DOJ passed on 16 Proud Boy transcripts before December 8.

Klukowski sat for two interviews with J6C — one on February 15, 2022, when he came off as a cooperative witness, and one on June 10, when the committee asked him about a bunch of documents involving John Eastman that Judge David Carter had released, some under a crime-fraud exception. At least during the interviews, Klukowski was represented by lawyers from Matt “Big Dick Toilet Salesman” Whitaker’s firm; see this exchange from Justin Caporale’s interview about how Matt Schlapp arranged for the defense of some Trump flunkies via the firm, and this reference to funding going to Schlapp from the J6C Report. In Klukowski’s second interview, the one discussing documents that had been liberated in part under a crime-fraud exception, one of Klukowski’s lawyers objected to the possibility that Klukowski might have to reassert privilege claims under oath. Whether these transcripts are part of why DOJ unsealed the grand jury materials or not, the two transcripts show how liberating the Eastman communications undercut much of what Klukowski had originally said about his involvement. And because he had already testified, this second interview provided useful backtracking on his earlier interview. The two transcripts may serve as useful tools in further breaching the privilege claims of these three lawyers, if not obtaining cooperation from one or several of them.

Alex Cannon is another example. Trump whisperers Josh Dawsey and Maggie Haberman have given him good press for his role in the stolen documents case. In February 2022, they tell us, Cannon refused to certify that Trump had turned over the the documents the President took from the White House.

Shortly after turning over 15 boxes of government material to the National Archives in January, former President Donald J. Trump directed a lawyer working for him to tell the archives that he had returned all the documents he had taken from the White House at the end of his presidency, according to two people familiar with the discussion.

The lawyer, Alex Cannon, had become a point of contact for officials with the National Archives, who had tried for months to get Mr. Trump to return presidential records that he failed to turn over upon leaving office. Mr. Cannon declined to convey Mr. Trump’s message to the archives because he was not sure if it was true, the people said.

The conversation between Mr. Trump and Mr. Cannon took place after officials at the archives began asking Mr. Cannon, following the return of the 15 boxes, whether additional classified material was at Mar-a-Lago. It was when Mr. Cannon raised this with Mr. Trump that Mr. Trump told him to tell the archives he had given everything back, the people familiar with the discussion said.

At the time, the various investigations related to the Jan. 6 attack on the Capitol by Mr. Trump’s supporters were ramping up, with a number of requests for documents, the people familiar with the discussion said. Mr. Cannon told people that he was concerned that if Mr. Trump was found to be withholding material related to Jan. 6, he would be in a worse situation, according to people familiar with the discussions.

But Cannon’s two transcripts (April 13 and August 18, 2022) put that seeming scrupulousness in different light. Much of the first one establishes how, because of the jobs he was given as a campaign lawyer, he was in a position to understand that the claims made in fundraising emails sent after the election conflicted with the evidence showing no significant vote fraud. At the very end of that first interview, though, investigators asked Cannon why he was claiming privilege over discussions with Jared Kushner about forming a PAC when he was working with a campaign that should not legally coordinate with such a PAC (to say nothing of Cannon’s admitted inexperience on campaign finance law).

In that first interview, Cannon agreed that money raised after the election would have to be spent on recounts or debt retirement. His second interview (which took place ten days after the Mar-a-Lago search) focused more closely on how money raised in the guise of fighting vote fraud was actually spent. In it, Cannon bristled when investigators suggested campaign money could only be spent on debt retirement or recounts.

Then in Cassidy Hutchinson’s September interviews (September 14 and 15) — the two focused on attempts to obstruct her testimony — she described how Cannon first helped set her up with Trump lawyer Stephen Passantino, and then tried to get her several jobs. Hutchinson also described how Passantino claimed that Cannon (as well as Eric Herschmann, another person heroically portrayed in Maggie stories) was involved in the manipulation of stories with Maggie Haberman.

When J6C made its referrals, it made clear that DOJ was already aware of efforts to tamper with Hutchinson’s testimony. Hutchinson started cooperating with DOJ shortly after her solo J6C testimony, in July. So even before the raid on Mar-a-Lago, then, DOJ likely understood that Cannon’s role was more complex than you might understand from reading a Maggie Haberman story. Importantly, Cannon’s role in allegedly tampering with Hutchinson’s J6C testimony would span the time when (per Maggie’s reporting) he heroically refused to certify Trump’s February 2022 production and the time in May 2022 when Trump’s team tried to find ways to stave off further investigation. These strands overlap temporally.

That puts Cannon’s role as a witness in much different light, because it would give him different visibility — and criminal exposure — on several different things: Trump’s document theft, Trump’s lies about vote fraud, Trump’s efforts to tamper with witnesses, and Trump’s spending of money raised to combat vote fraud.

And that’s important background when you consider CNN’s reporting about the financial side of DOJ’s investigation, which described that “in recent months” an existing year-long investigation into the financing of the attack has shifted (like the J6C focus has) to how money raised purported in support of election integrity actually got spent.

Another top prosecutor, JP Cooney, the former head of public corruption in the DC US Attorney’s Office, is overseeing a significant financial probe that Smith will take on. The probe includes examining the possible misuse of political contributions, according to some of the sources. The DC US Attorney’s Office, before the special counsel’s arrival, had examined potential financial crimes related to the January 6 riot, including possible money laundering and the support of rioters’ hotel stays and bus trips to Washington ahead of January 6.

When Cannon refused to certify Trump’s production in February 2022, he had personal exposure in January 6. Refusing to certify documents because withholding some might amount to obstruction is far less heroic than the Trump whisperers have made out. But in ensuing months, as the complexity of Cannon’s role has become clear, it would provide DOJ many angles for DOJ to persuade Cannon to cooperate.

The grand jury release last month made me realize just how complex it is to investigate suspected crimes in which at least 12 lawyers were involved. But the transcripts should help DOJ pierce other privilege claims as well. For example, multiple witnesses were asked and mocked the idea that their own conversations with Jenna Ellis — who is a lawyer whose name was on many of the subpoenas DOJ has sent out but was often described as playing a spokesperson role — might be privileged. The same is true of lawyer Boris Epshteyn, described as playing a logistics, not legal role.

So in the same way that DOJ seemed to focus on emails involving Scott Perry with the Eastman, Jeffrey Clark, and Klukowski seizures, the J6C testimony will provide many more levers to use to chip away at attorney-client privilege claims (on top of what seems to be a slew of subpoenas that will partly serve the same purpose).

At some point in recent weeks, Jack Smith returned to the US to oversee the investigation he has been leading since November. The belated sharing of J6C transcripts will likely provide a big boost to that investigation.