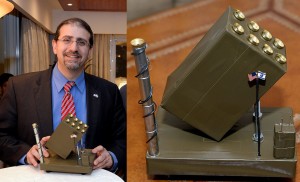 Ambassador Daniel Shapiro proudly displays the disgusting menorah in the shape of an Iron Dome missile battery, complete with tiny flags from the US and Israel.

Despite having raked in over a billion dollars on the failed Iron Dome system, US and Israeli defense contractors are eagerly promoting their latest addition to Israel’s ballistic defense system, the Arrow 3. That system was tested yesterday, and it failed:

Operators of the Arrow 3 battery at Palmahim air base on the Mediterranean coast canceled the launch of its interceptor missile after it failed to lock on to a target missile fired over the sea, the sources said.

“There was a countdown to the launch and then nothing happened,” one source told Reuters on condition of anonymity. “A decision was made not to waste the interceptor missile.”

Israel’s Defense Ministry tried to deny the failure, and the Jerusalem Post parroted them:

Defense officials said they decided to abort the firing of the interceptor due to the failure of a series of conditions to materialize, adding that the trial was “neither a success nor a failure.”

During the test, a target missile was fired at Israeli air space from over the Mediterranean Sea. In future trials, the Arrow system will be ordered to intercept incoming mock missiles, something that did not occur this time, the ministry added.

The ministry later clarified that during the trial, the target missile flew along its planned path and was tracked by Arrow, but that “the conditions for firing an interceptor were not ripe, and we therefore decided to class the trial as a target missile exercise only.”

Yair Ramati, of the Defense Ministry’s Administration for the Development of Weapons and Technological Infrastructure, said the trial was to have consisted of two parts, Ramati said. “The first part of the launch involved tracking the target missile, which was fired over the Mediterranean Sea toward Israel. In the second phase, the Arrow 3 interceptor was supposed to be fired after a series of conditions we set for the trial are met. At an early phase, we collectively decided that the conditions have not been met. In accordance to our criteria, we decided not to launch the Arrow 3 interceptor.”

But for a defense program where failure is a way of life, one more failure is just another milestone in product development:

He stressed that conditions for a trial are very different than those need for an operational launch. “This is not the first time that not all conditions are met for a trial,” Ramati added.

“This trial represents a milestone in the development of the system,” the Defense Ministry added.

Haaretz informs us that this failure comes quickly on the heels of another:

This is the second Arrow test to fail within a short time: In September a trial involving the Arrow 2 missile did not succeed either. In that incident Defense Ministry officials concealed the results for many hours. Even after Haaretz reported the failure, they made no comment.

Despite all these failures, Boeing happily touts the Arrow system on its website:

Arrow 3, the newest addition to the Arrow Weapon System, is the upper tier in the Arrow family of weapons that incorporates the latest technology to combat a continually advancing threat. Short- and medium-range ballistic missile threats require prompt and effective self-defense capabilities. The threat of more sophisticated missiles, including the threat of weapons of mass destruction, requires a multi-tier approach to achieve a zero leakage rate. As the world’s first operational national missile defense system, the Arrow Weapon System successfully destroys targets using the latest – technology to achieve a higher probability of a successful engagement. The Arrow Weapon System is affordable and has low total ownership costs.

Come on down, folks! With “low total ownership costs”, you too can have your own ballistic defense missile system that doesn’t work!

Meanwhile, is there anything in the world more vile and disgusting than the photos at the top of this post? They were downloaded from the Flickr account of the US Embassy in Tel Aviv, which I reached from the Embassy’s web page. Who could have thought that a menorah in the shape of an Iron Dome missile battery, complete with little flags from the US and Israel, would be a good idea?