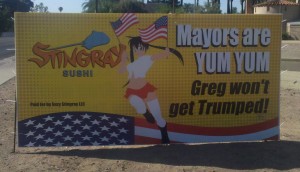 We have an interesting phenomenon underway here in Phoenix – the outright commercialization of political campaign ads. It is the handiwork of a Scottsdale sushi restaurant, Stingray Sushi. In short, a corporation is using a political race as a straight up advertising vehicle for their product, without officially supporting or donating to either candidate. The ploy started off just riffing on hot button political issues such as:

Stingray then morphed into playing off of a local initiative drive on the ballot. But now they have stepped square into a heated political race between competing candidates. 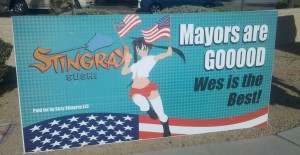 The current, and heaviest manifestation of this novel activity by Stingray to date, is the current Phoenix Mayor’s race, which will be decided on November 8. The race itself is supposedly non-partisan, however it pits longtime uber-Republican operative Wes Gullett, who was the chief of staff for disgraced (and convicted) Governor Fife Symington and has served in several administrative and campaign capacities for John McCain over the years, against a moderate, but fairly clear Democrat, former City Councilman Greg Stanton.

If the question is “is this legal”? Yes, it appears to be quite legal under both state and federal campaign law, although Stingray has had to put stickers on their signs advising that it is “Not authorized by any candidate or candidate’s campaign committee.”

The ad campaign is the brainchild of a local ad and political consultant by the name of Jason Rose. I will have to give Jason credit here, it is pretty inventive and has certainly captured the imagination of Phoenix residents. Everybody has seen them, even my high school daughter talks about them. My wife thinks they are hilarious catch phrases now. Anytime I mention politics, she blurts out “Mayors Are Yum Yum!”.

Now, here is the better question – where does this go from here? Stingray is playing both sides of the electoral race fence in this campaign, but it is hard to believe others necessarily will do the same. Will bigger corporations exercise their right to free political speech decreed in Citizens United by branding themselves to a particular candidate? Is it a good thing to have electoral races clouded by raw corporate advertising pitches as opposed to actually taking a side?

I honestly do not know the answers to the questions raised, not the plethora of others that arise from this ad campaign. But I doubt it is a one off deal, you can expect to see other similar ad campaigns attached to elections in the future. What do you think??