There was yet another US drone strike in Pakistan today. According to Bill Roggio at Long War Journal, today’s strike is the fourth strike in six days. After the first strike in this series, I posed the question of whether that strike was more politically based than strategically based, as the strike came just two days (Roggio has it as one day after the summit, but there are large time zone differences; the summit ended on Monday in Chicago and the first strike was early Wednesday local time in Pakistan) after US-Pakistan negotiations on reopening NATO supply routes through Pakistan broke down at the NATO summit in Chicago and on the very day that Dr. Shakeel Afridi was sentenced for treason because he helped the CIA to gather intelligence that aided the US raid to kill Osama bin Laden.

There is now ample evidence to believe that politics are indeed behind the recent strikes and, as Marcy and I have been noting on Twitter, they likely will continue on a virtually daily basis to make the political points that the US is stressing. Recall that after the first strike in the series, I quoted a Guardian article that also came to the conclusion the strike was politically motivated:

In today’s report, Roggio provides a quote with direct evidence that the strikes now are tied politically to the impasse over reopening the supply routes (although it seems likely that Dana Rohrabacher isn’t the only one advocating the use of a “stick” on Pakistan over the Afridi sentencing, too):

A US intelligence official involved in the drone program in the country told The Long War Journal that the strikes would continue now that Pakistan has refused to reopen NATO’s supply lines for the International Security Assistance Force in Afghanistan.

But hold on just a minute here. Note the misdirection in this quote. Despite the claim that the US is “targeting bad guys” with these strikes, Roggio reports elsewhere in this article that no high value target has been reported as killed in today’s attack. In fact, he reports that there have been 17 US drone strikes in Pakistan this year, but only two high value targets have been killed in them.

Where have we heard someone recently trying to make the false claim that “signature strikes” are targeted rather than based simply on patterns of activity? Why that would be in John Brennan’s April 30 drone speech, which Marcy has cleanly dissected as a failed attempt to direct attention away from the war crimes committed regularly in signature strikes.

Roggio’s anonymous source says basically that the strikes will continue until the political situation improves. Despite the source’s claim that the strikes target “bad guys” the evidence instead shows that these are signature strikes that at best target mid-level or even lower level militants who happen to be in areas “known to harbor insurgents”. Given how closely this misdirection about targeting mirrors Brennan’s speech (and the fact that Brennan himself now controls signature strikes) it seems likely that the strikes themselves are Brennan’s way of telling Pakistan that the beatings will continue until morale improves. 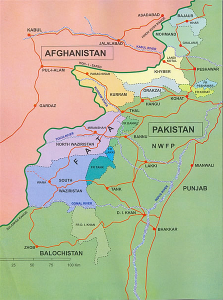 The attack came as Washington runs out of patience with Islamabad’s refusal to reopen supply routes for Nato troops in Afghanistan. END_OF_DOCUMENT_TOKEN_TO_BE_REPLACED