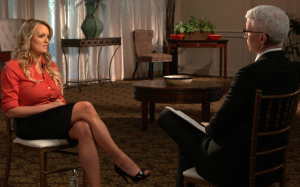 As you may have heard, there is an interview on CBS 60 Minutes tonight of former Trump paramour Stormy Daniels. In the last 48 hours, there have been a slew of Stormy biographies. From the New York Times, the Washington Post, and CNN. All worth a check if you are interested, but all paint a similar picture.

The picture that emerges on closer inspection is far different. She is an informed and savvy woman in full. She is a mother and businesswoman, and one who understands and worries about the conflicts between the two. Karen McDougal, in her Thursday interview on CNN came off as genuine and honest, even if somewhat lost in why she is here with all of the public now. Daniels has none of that. And her story is, within the salacious category Trump brings us to consider, far more compelling.

The stories of Daniels and McDougall were literally concurrent, starting with a golf tournament tete a tete at the Tahoe Pro Am. But McDougall presents as a jilted woman once in love, Daniels is flat out a smarter woman who knew then, and knows now, what was up, then and now, and just isn’t going to stand for the rank hypocrisy and lying by Trump and his goons like Michael Cohen.

The rushed out bios linked above largely track each other, but to my eye, the New York Times is the best:

Those who know her well have registered the moment differently. Ms. Clifford has subsisted amid the seamier elements of a business often rife with exploitation and unruly fare; more than a few of her film titles are unprintable. But for most of her professional life, Ms. Clifford has been a woman in control of her own narrative in a field where that can be uncommon. With an instinct for self-promotion, she evolved from “kindergarten circuit” stripper to star actress and director, and occasional mainstream success, by her late 20s. Why would a piece of paper and an executive legal team set her back?
….
“She was a very serious businesswoman and a filmmaker and had taken the reins of her career,” said Judd Apatow, who directed her cameos in the R-rated comedies “Knocked Up” and “The 40-Year-Old Virgin.” “She is not someone to be underestimated.”
….
She has a daughter, a third husband and an expensive hobby: equestrian shows. “She blends right in,” said Packy McGaughan, a trainer on the competition circuit.
….
“Just as these misguided arbiters of the mainstream view an adult entertainment star as an anathema to the political process,” she said, when she eventually decided against a bid, “so too do they view the dishwasher, the cashier or the bus driver.”

This woman is real. Please go read at least the NY Times story, if not the others linked. She is everything you think she is, and far, far, more. And she has no fear. Not of her career, and not of Trump. That has to terrify Trump.

Here is the other thing that is different: Stormy Daniels has Michael Avenatti as her lawyer. Never met or talked to Avenatti before, but I have heard of him in cases (and from auto racing things), and from friends, for several years. He is good.

After three years at O’Melveny, he joined Greene Broillet & Wheeler, a Los Angeles boutique litigation firm. While there, Michael spearheaded many high-profile cases, including a $10 million defamation case against Paris Hilton; a successful idea theft lawsuit involving the reality show The Apprentice and its producer, Mark Burnett, as well as Donald Trump; and a large corporate multi-national embezzlement case involving in excess of $42,000,000.

In 2007, Michael formed the law firm Eagan Avenatti, LLP (fka Eagan O’Malley & Avenatti, LLP), with offices in Newport Beach, Los Angeles and San Francisco. Since co-founding the firm, Michael has been responsible for securing a number of large verdicts and settlements as lead counsel, including an April 2017 $454 Million verdict after a jury trial in Federal Court in Los Angeles in a fraud case against Kimberly-Clark (NYSE: KMB) and Halyard Health (NYSE: HYH) that was featured on 60 Minutes (won every jury question as to every defendant); a $80.5 million class action settlement against Service Corporation International (NYSE: SCI) in another case featured on 60 Minutes and in the international press (settlement reached in the middle of trial); a $41 million jury verdict after a nearly five-week trial in New Jersey; a $39 million settlement in a case involving the alleged theft of trade secrets; and a $13 million plus verdict after a six week jury trial in Palm Beach, Florida (won every jury question as to every defendant). In 2015, Michael prevailed against the National Football League after a two-week jury trial in Federal District Court in Dallas, Texas after obtaining a court order requiring Jerry Jones to attend trial and be cross-examined.

I had heard of him before, but really first watched Avenatti when he took on the National Football League and Jerry Jones. Because of some sports law friends, some of whom were closer to that story, I paid attention. Avenatti is seriously that good, and he has the extra bonus of knowing how to be a good trial lawyer AND play the PR game, personally, well. There are not many such lawyers, and ones tending to the PR more than the law are routinely panned mercilessly here at this blog. For good reason.

If you don’t have a winning strategy with the press, don’t talk to the press. Even if you think you do, think twice and thrice before doing so. Or, by my book, just don’t do it. But Avenatti has a really special combination of savvy, and has proven it long before Stormy Daniels.

Nobody knows how it all ends up, and playing the press is a risky game even for those genuinely good at it. But, so far, Avenatti and Stormy have played Trump and the press like a Stradivarius.

And, if as Trump is reportedly contemplating, Trump decides to get personally aggressive, watch out. He may well have met his match with Ms. Daniels and Michael Avenatti. By my guess, they are almost making bank Trump will try that ill advised tact. Let it be. Please, let it be.