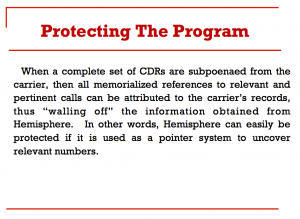 After all, the only way you can learn what truly happens in prosecutions that have used parallel construction to hide their sources is to work backward from the actual prosecution. END_OF_DOCUMENT_TOKEN_TO_BE_REPLACED

In its latest update on NYC’s spying on Muslims, the AP reports the program is partially funded by the White House Drug Czar in grants associated with the High Intensity Drug Trafficking Area Program.

Some of that money — it’s unclear exactly how much because the program has little oversight — has paid for the cars that plainclothes NYPD officers used to conduct surveillance on Muslim neighborhoods. It also paid for computers that store even innocuous information about Muslim college students, mosque sermons and social events.

When NYPD Commissioner Raymond Kelly was filled in on these efforts, his briefings were prepared on HIDTA computers.

What the article notes but doesn’t emphasize–but which is the entire point of White House czar positions–is that there is little oversight over how these funds get used. Congress did not get to see a breakout of how the NYPD uses its “war on drugs” funds.

Congress, which approves the money for the program, is not provided with a detailed breakdown of activities. None of the NYPD’s clandestine programs is cited in the New York-New Jersey region’s annual reports to Congress between 2006 and 2010.

The problem with programs run by White House czars is that White Houses of both parties routinely argue that Congress has no legitimate oversight over them.

The White House last week declined to comment on its grant payments.

And, as the AP has pointed out repeatedly in its reporting on this program, no one in New York City is exercising oversight either.

It’s unclear how much HIDTA money has been used to pay for the intelligence division, in part because NYPD intelligence operations receive scant oversight in New York.

The main point of the AP article is that the White House owns this ineffective, abusive spying, just as much as Ray Kelly.

But just as importantly, the use of Drug Czar funds for a program that is every bit as counterproductive and wasteful and stupid as the war on drugs symbolizes just how far those running this program have shielded it from any oversight.