Jamie Dimon’s Company Fined $88.3 Million for Trading with the Enemy 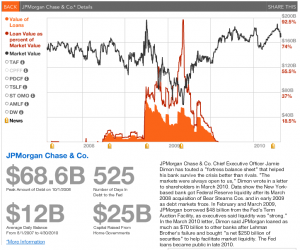 But the more interesting violation came when JPMC refused to turn over some documents relating to Khartoum until the government told the bank they knew JPMC had the documents.

And in spite of that apparent obstruction, TurboTax Timmeh Geithner’s agency still treated Jamie Dimon’s disloyal company leniently because of what they called JPMC’s “substantial cooperation.”

According to Bloomberg’s count, the Fed lent this disloyal company $68.6B after banksters like Jamie Dimon crashed the economy.

During and after the period JPMC took that money, it financed trade with Iran, tried to hide the Khartoum deal, and financed more trade with Sudan (though it sent money to Cuba and sent Iran 32,000 ounces of gold, now worth $55 million, before taking our money, in 2006). Some of this trading with the enemy was reported internally to “JPMC management and supervisory personnel;” at least some of this wasn’t the work of rogue employees.

This is the kind of MOTU that Obama considers an ally.