Did Treasury Fire Jim Freis for Showing that Banksters Are a Bigger Problem than Terrorists? 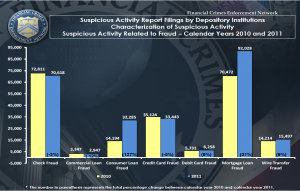 As I noted earlier, a few weeks ago Treasury fired the head of FinCEN, Jim Freis. (FinCEN makes sure that financial institutions report whatever evidence of potential crimes they’re seeing.)

American Banker reported that Treasury wanted “additional focus on international areas such as terrorist financing,” and less focus on “other financial crimes such as mortgage fraud.”

Three days before he was fired, FinCEN released this report, showing in aggregate what all of last year’s Suspicious Activity Reports revealed. It shows that among the SARs from depository institutions (which make up over half of all SARs), reports of terrorist financing and hacking (computer intrusion) are going down, while reports of behavior targeting consumers–mortgage and consumer loan fraud–are going up (though it notes the mortgage loan fraud reports are inflated because some date from years ago).

Such trends are similar to what the report shows in the securities and futures industries, with an even bigger drop in terrorist financing and big gains in futures fraud, embezzlement, and insider trading.

Remember, SARs are not a reflection of what Freis demands (nevermind the fact he’s been on the job when things like terrorist financing were higher). Rather, this is what banks and securities firms self report, as mandated by law, about what they’re seeing in their own records.

Jim Freis showed that terrorism is getting better and bankster crimes are getting worse. And then Treasury fired him.

And the report from American Banker suggests that by replacing Freis, Treasury may intend to have FinCEN dictate what financial institutions prioritize. Which will mean terrorism–and not the crimes of banksters–will once again be the focus.

Fincen is likely to take a higher profile when it receives new leadership. In the immediate aftermath of the Sept. 11 attacks, Fincen was very active in dealing with bank regulatory matters, including helping to shape policy on anti-money laundering requirements. But the financial crisis largely pushed Fincen to the side and the agency focused on many of its other responsibilities. Treasury appears to want Fincen to take a larger role in terrorist financing activities and possibly reassert itself in the bank regulatory sphere. In past few years, banks have not had to focus on what Fincen’s agenda was. A more assertive Fincen changes the equation.

FinCEN offers one objective read of the relative prevalence of various forms of financial crime. And last year, it showed that banksters were a growing problem and terrorists a shrinking one.

And that message was so dangerous to the powers that be, it appears, Treasury decided to kill the messenger.