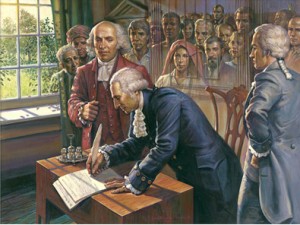 As most know by now, Charlie Savage at the New York Times let loose a stunning blockbuster of an expose of the conduct of Barack Obama and his inner circle in relation to the Libyan war vis a vis the War Powers Resolution:

President Obama rejected the views of top lawyers at the Pentagon and the Justice Department when he decided that he had the legal authority to continue American military participation in the air war in Libya without Congressional authorization, according to officials familiar with internal administration deliberations.

Jeh C. Johnson, the Pentagon general counsel, and Caroline D. Krass, the acting head of the Justice Department’s Office of Legal Counsel, had told the White House that they believed that the United States military’s activities in the NATO-led air war amounted to “hostilities.” Under the War Powers Resolution, that would have required Mr. Obama to terminate or scale back the mission after May 20.

But Mr. Obama decided instead to adopt the legal analysis of several other senior members of his legal team — including the White House counsel, Robert Bauer, and the State Department legal adviser, Harold H. Koh — who argued that the United States military’s activities fell short of “hostilities.” Under that view, Mr. Obama needed no permission from Congress to continue the mission unchanged.

Let’s be crystal clear as to what happened here: The Attorney General, Head of the Office of Legal Counsel and the General Counsel for the Pentagon/DOD all listened to Obama’s plan to flat out ignore the War Powers Resolution (50 U.S.C. 1541-1548), and the Article I power it represents, and they unanimously said it was untenable and illegal in the face of the War Powers Resolution.

Mr. Obama knows the War Powers Resolution exists, does not challenge its viability or Constitutionality and, against the direct opinion and advice of the three most germane attorneys in the United States Government, has just blithely and unilaterally blown it off. There are nine fairly short provisions in the statutory delineation of the “War Power Resolution” and, despite the yammering from the Administration and dithering by the press, they are actually remarkably clear in their intent and letter.

A criminal can nuance, excuse and rationalize himself around pretty much every statutory criminal provision, but society as a whole has no problem looking at the statute and seeing that there is offending conduct. And so it is here; Obama has thrown up sophistry, excuse and self indulgent rationalization. But any honest review of the WPR yields the unmistakable conclusion Obama is in direct violation, and has been from the outset. Congress has been crystal clear that they have NOT authorized the Libyan war participation.

Make no mistake, this is simply a stunning act of the most basic type of executive branch usurpation of power and illegal act that the Founders contemplated when they included the impeachment power and provision into the Constitution. As Alexander Hamilton stated in Federalist Paper Number 65:

A well-constituted court for the trial of impeachments is an object not more to be desired than difficult to be obtained in a government wholly elective. The subjects of its jurisdiction are those offenses which proceed from the misconduct of public men, or, in other words, from the abuse or violation of some public trust. They are of a nature which may with peculiar propriety be denominated POLITICAL, as they relate chiefly to injuries done immediately to the society itself.

Whether or not there should be an impeachment investigation, or what the scope of such would be, is a discussion for another day and not the subject of the instant post. The point here is simply that the conduct we are discussing here is precisely the nature and type of which the Founders contemplated when adopting the separation of powers and impeachment provisions. Not to mention placing war making authority within the Article I scope of Congress.

The point here is that failure to at least have that discussion, and take a sober look at the facts at issue, and ourselves in the mirror, is to fail the Constitutional form of representative democracy we profess to love. It is to fail our basic duties as participatory citizens; it is to fail the nation.

Professor Jack Balkin gave an even handed, but truly damning at heart, analogy to the recent ills occasioned by the Bush/Cheney Administration:

It is instructive to compare President Obama’s actions with those of his predecessor, George W. Bush, who sought legal justification for his decision to engage in waterboarding and other “enhanced interrogation techniques,” which constituted torture. Bush wanted above all to be able to deny that he was violating the anti-torture statute and other laws and treaties. So he found a small group of lawyers in the OLC, headed by John Yoo, and asked for their opinions. This short-circuited the usual process through which the OLC collected views from various agencies and then used them to develop legal opinions for the executive branch. That is, Bush (assisted by his Vice-President, Dick Cheney) arranged matters so that decisions about waterboarding and enhanced interrogation techniques would be in the hands of lawyers he knew would tell him yes; the normal process of collating opinions was short-circuited and other lawyers were effectively frozen out.

Obama’s practice is different, but it has disturbing similarities. Normally, Obama would have asked the OLC for its opinion, and as noted above, the OLC would have polled legal expertise in various agencies, consulted its precedents, had long discussions, and then come up with a scholarly opinion that is normally binding on the executive branch. Instead, Obama routed around the OLC, asking for opinions from various lawyers, including the White House Counsel and the Attorney-Advisor for the State Department. It is difficult to escape the conclusion that from the outset Obama was prospecting for opinions that would tell him that his actions were legal, and once he found them, he felt comfortable in rejecting the opinion of the OLC.

Obama’s strategy, like Bush’s, also short circuits the normal process of seeking opinions from the OLC; it simply does so in a different way.

By bypassing a careful set of procedures designed to produce careful legal opinions, George W. Bush was able to say that he was following the OLC, or at least a rump of the OLC. But he was effectively undermining the OLC’s function as an honest broker of executive branch opinions. Obama also bypassed this same careful set of procedures by canvassing various lawyers until he found opinions he liked better than the OLC’s. If one is disturbed by Bush’s misuse of the process for vetting legal questions, one should be equally disturbed by Obama’s irregular procedures

Ouch, that may leave a mark, as does the spot on discussion of OLC manipulation by Jack Goldsmith at Lawfare. And Glenn Greenwald at Salon makes a similarly compelling analogy of the Obama WPR conduct with the Constitutional crisis presented by the unconstitutional and illegal surveillance program of Bush Administration that blew up in the night of near legal mutiny of the “Ashcroft Hospital Incident”.

Balkin, Goldsmith and Greenwald are all correct to analogize and discuss the Obama WPR treachery in terms of the Bush/Cheney precedent. But, as much as I respect them and their discussion on this issue, I think all three sell the situation short. In a critical way. The Bush/Cheney precedent, whether as to the torture component or the surveillance component, involved an administration that twisted the law to suit their ends; but give the Bushies their due, at least they made the surface attempt at having the patina of a legal imprimatur. Obama has, on quite a different and much worse hand, arrogantly and belligerently, in your face and finger in your eye, violated an important existing law that he does not challenge the Constitutionality of. Obama thus admits the validity of the War Power law and in the same breath says with impunity that he is above it and not subject to it.

The War Power Resolution treachery on Obama’s part is actually materially worse than what the Bush brigade did. As Glenn said:

All that aside, what is undeniable is that Obama could have easily obtained Congressional approval for this war — just as Bush could have for his warrantless eavesdropping program — but consciously chose not to, even to the point of acting contrary to his own lawyers’ conclusions about what is illegal.

Other than the same hubris — and a desire to establish his power to act without constraints — it’s very hard to see what motivated this behavior. Whatever the motives are, it’s clear that he’s waging an illegal war, as his own Attorney General, OLC Chief and DoD General Counsel have told him.

Indeed, that is exactly where we are, and the most troubling aspect is there is no question whatsoever that Congress would have pliantly given Obama the requisite authorization sufficient to give at least nominal legal cover for the American participation in the Libyan hostilities. But, instead, Mr. Obama chose to arrogantly and belligerently usurp Article I power on what is likely the most fundamental and germane aspect underlying the separation of powers in the Constitution – how the nation goes to war and inflicts death on another nation’s citizens.

That is where we are today. I am sure laying it out in these terms will unleash the dogs of whine from fawning Obama acolytes and partisan hacks who blindly think only of partisan interest in the upcoming election. But those trifling concerns shrink in the face of the Congressional oath to protect and defend the Constitution and the corresponding duty and obligation on American citizens to demand and insure they do just that.

Without saying Obama should be impeached, failure to at least have the discussion made in those terms is dereliction of constitutional duty by people, pundits and Congress. This critical issue is not yet getting that kind of play, but it should as it is absolutely why the founders placed the provision in the Constitution to start with.

If our society and political discourse cannot seriously discuss impeachment for the type of executive perfidy demonstrated by Barack Obama in relation to Libya and the War Powers Resolution, and could not discuss it during the Bush/Cheney crimes, then the impeachment provision of the Constitution has no meaning and should be stricken.

Seriously, those are the stakes. A discussion, even an investigation, does not mean there has to be an impeachment conviction, or even that articles of impeachment should even be filed. But the discussion must be had if there is to continue to be integrity to the most fundamental terms and conditions of the United States Constitution.