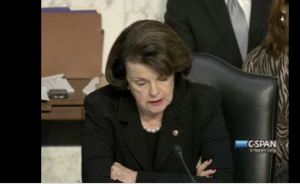 In her statement at the beginning of the Threat Intelligence Assessment hearing today, Dianne Feinstein complained that the Executive Branch continues to blab about things that are supposed to be secret (this starts around 11:00).

I’d also like to say that once again this committee has been put in a difficult position of trying to avoid any mention of classified matters when various parts of the executive branch may be doing somewhat the opposite. I ask members to be careful in their questions and statements and to remember that public discussion of some intelligence programs and assets can lead to them being compromised.

On the particular issue of drone strikes, I will only say that I was cleared to say in our joint hearing with the House Intelligence Committee last September “And there’s no issue that receives more attention and oversight from this Committee than the United States Counterterrorism efforts going on along the Afghanistan-Pakistan border. These efforts are extremely precise and carefully executed and are the most effective tools we have. Non-combatant casualties are kept to an absolute minimum.”

Given the timing, given her references to both assets and programs, and given her comments about the drone strikes on the Pakistani border, I assume she’s complaining about Leon Panetta’s blabbing to 60 Minutes the other night. (Plus, DiFi and Panetta have had their difficulties in the past.)

You see? It’s not just me that is fed up with this double standard on secrecy.

Update: Josh Gerstein talked to DiFi after the hearing, and she made it clear she was not criticizing the President.

Feinstein insisted after Tuesday’s hearing that her remarks were not aimed at Obama.

“I was not criticizing the president.  I was reminding the committee about protecting classified information,” she said in a statement e-mailed to POLITICO. She did not elaborate on what “parts of the executive branch” she was referring to in her public comments earlier in the day. A spokesman had no immediate response to a request for clarification.