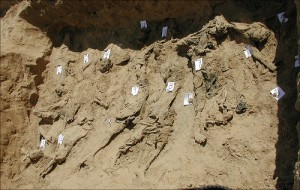 Yesterday, I pointed out that Afghanistan’s President Hamid Karzai denied entry to his country by Representative Dana Rohrabacher (R-CA) over the weekend. At the end of that post, I posed a question:

It turns out that we can get a good handle on whom Rohrabacher wishes to promote in Afghanistan by going back to Rohrabacher’s own press release arising from his January 9 meeting in Berlin that brought his feud with Karzai to a head. Although Rohrabacher would like us to think that he is arguing for a more decentralized model of government in Afghanistan, his real motivation is revealed in the opening sentence of the press release, where he states he brought a group together “to discuss alternatives to Hamid Karazi’s consideration of including the Taliban in Afghanistan’s coalition government”.

Once again, we see Rohrabacher’s primary operating principle at work. His actions are determined by whom he has chosen as his enemy. Unfortunately, once Rohrabacher has chosen his enemy, all he seeks in an ally is someone who also opposes that enemy. As noted yesterday, that was the process that led him and his Freedom Fighters in the Reagan administration to ally us with Osama bin Laden against the Soviets when they were in Afghanistan. Now, with Karzai daring to negotiate with the Taliban, Rohrabacher has decided to team with anyone in Afghanistan whom he sees as opposing the Taliban. In doing so, he chose for his meeting in Berlin to present a group of “National Front Leaders” that contains the war lord responsible for the largest, most heinous war crime committed in Afghanistan since the turn of the century, a criminal former vice president of the country who was stopped with a suitcase containing $52 million and a former security chief described as an unapologetic hawk who advocates escalating the war in Afghanistan.

Batting leadoff for Rohrabacher’s All Stars is the notorious war criminal Rashid Dostum. As a war lord in the Northern Alliance, Dostum was responsible for the killing of approximately two thousand prisoners who had surrendered in November of 2001:

Survivors and witnesses told The New York Times and Newsweek in 2002 that over a three-day period, Taliban prisoners were stuffed into closed metal shipping containers and given no food or water; many suffocated while being trucked to the prison. Other prisoners were killed when guards shot into the containers. The bodies were said to have been buried in a mass grave in Dasht-i-Leili, a stretch of desert just outside Shibarghan.

A recently declassified 2002 State Department intelligence report states that one source, whose identity is redacted, concluded that about 1,500 Taliban prisoners died. Estimates from other witnesses or human rights groups range from several hundred to several thousand. The report also says that several Afghan witnesses were later tortured or killed.

Of course, Dostum denies the charges, but his denial rings hollow. What is particularly galling about Rohrabacher wanting to team with Dostum now is that the prisoners Dostum killed were Taliban fighters who had surrendered to him after the fall of the government in Kabul. That means that Rohrabacher’s view of “decentralizing” government in Afghanistan means to bring to the negotiating table the war criminal who has murdered more Taliban fighters than anyone else in the world to negotiate with … the Taliban. Clearly, Rohrabacher is more interested in punishing the Taliban and driving them away from negotiations than in finding a peaceful route to a democratic form of government.

It should also be noted that Risen’s article discussed the numerous times investigation of Dostum’s war crimes was blocked, perhaps because Dostum had been on the CIA’s payroll and perhaps because US special forces may have been present during parts or all of the commission of the atrocities by Dostum’s forces. At the time the article was written, Karzai had just brought Dostum back into a ceremonial role in Afghanistan’s military. Notably, the State Department argued strongly against such a move:

American officials had been reluctant to pursue an investigation — sought by officials from the F.B.I., the State Department, the Red Cross and human rights groups — because the warlord, Gen. Abdul Rashid Dostum, was on the payroll of the C.I.A. and his militia worked closely with United States Special Forces in 2001, several officials said. They said the United States also worried about undermining the American-supported government of President Hamid Karzai, in which General Dostum had served as a defense official.

“At the White House, nobody said no to an investigation, but nobody ever said yes, either,” said Pierre Prosper, the former American ambassador for war crimes issues. “The first reaction of everybody there was, ‘Oh, this is a sensitive issue; this is a touchy issue politically.’ ”

It is not clear how — or if — the Obama administration will address the issue. But in recent weeks, State Department officials have quietly tried to thwart General Dostum’s reappointment as military chief of staff to the president, according to several senior officials, and suggested that the administration might not be hostile to an inquiry.

It seems particularly fitting that Secretary of State Hillary Clinton was the one who had to deliver the news to Rohrabacher that he would not be allowed into Afghanistan since it was her State Department that had lobbied against a return of Dostum to the Afghan government and Rohrabacher was angling for an even larger role for Dostum.

The other two figures chosen by Rohrabacher for his meeting in Berlin are also characterized as rabidly anti-Taliban (so, of course, Rohrabacher wanted to team with them). They are former Vice President Ahmed Zia Massoud and former intelligence chief Amruallah Saleh.

Despite Rohrabacher’s continued harping on the corrupt nature of the Afghan government, in choosing to team up with with Massoud, he is aligning with known corruption:

Classified diplomatic cables lay bare the extent of corruption at the highest level in Afghanistan, with cash apparently pouring out of the country.

One report claims former vice-president Ahmad Zia Massoud flew into Dubai with $52million in cash and was never asked to explain where it came from.

And, just like Rohrabacher, Saleh defines himself by his hatred for the Taliban:

He is an unapologetic hawk who wants NATO and Afghan forces to escalate the war — more night raids, more targeting killings, more drones inside Pakistan. Many, including President Karzai, believe he is misguided and reckless but Amrullah insists that a greater civil war is inevitable unless the Taliban, their sponsors in Pakistan, and Al Qaeda are forever defeated.

I find it very hard to believe that these are the best candidates who can be found to be put forward for the important task of guiding Afghanistan through the huge challenges it will face as NATO forces leave. Karzai is indeed corrupt, but saddling him with a war criminal, more corruption and a violent war hawk will only make things worse.