Separating Truth from Fiction at Parchin: Neutron Activation Can’t Be Scrubbed Away 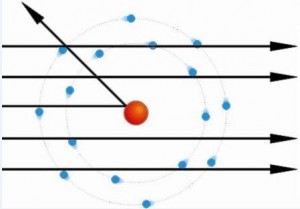 Albright and Fitzpatrick completely overlook a very important basic aspect of the nuclear physics involved here. If they really are going to claim that uranium is being used and that bursts of neutrons capable of initiating a nuclear reaction are the goal of the experiments, then the neutrons originating from the uranium and from the neutron bursts would result in neutron activation of the steel container itself. Neutron activation occurs when the nucleus of an atom absorbs a neutron, forming a new, radioactive, form of the original atom.

The most common neutron activation product in steel is production of cobalt-60 from the naturally occuring cobalt-59 in the steel. Cobalt-60 has a half-life of over five years and is very easily detected due to the high energy beta and gamma radiation released by it and its decay products. It is critically important to note that this neutron activation occurring within the steel of the container would not be just on the inside surface of the chamber. The collisions of neutrons with cobalt-59 nuclei in the steel would occur throughout the full thickness of the steel, because at the scale of a neutron, the metal atoms comprising the steel are mostly empty space. Thus, the neutrons pass through the steel, only occasionally colliding with a metal nucleus. If the collision is with a cobalt-59 nucleus, then cobalt-60 can be formed as the nucleus absorbs a neutron. (See this helpful tutorial from Florida State University showing the classic 1911 Rutherford, Geiger and Marsden experiment where alpha particles are shot through a gold foil. The concept for neutrons going through steel is essentially the same.)

With those thoughts in mind, we now have tools with which to evaluate subsequent developments surrounding the chamber at Parchin. The claims from Albright and Fitzpatrick appear to be aimed at setting the stage for accusations that Iran carried out trigger research at the facility, even using uranium, but subsequently removed all radioactive traces of that work. Such an accusation could be made after IAEA gaining access to the site but failing to find traces of radioactivity. However, the neutron activation information above would make such an accusation highly dubious, as it would be impossible to remove all traces of neutron activation of the steel from which the chamber is constructed.

On the other hand, should Iran remove the chamber, then that would be suggestive that they were unable to remove neutron activation evidence and thus unable to hide evidence of trigger research. Further, analysis of the metal itself, if access to the chamber is granted, would be very informative about Iran’s intentions when the chamber was constructed.

The AP cartoon article claims the chamber was constructed in the early 2000’s by Azar AB Industries. It is doubtful that this Iranian company has experience working with steel intended for nuclear uses. The cobalt concentration in the steel used for this chamber should be compared to the cobalt concentration in other steel materials produced by Azar AB Industries, because steel intended for use in nuclear activities is intentionally engineered to be low in cobalt content:

Due to the ability of cobalt to absorb neutrons, severe restrictions are placed on its concentration in steels destined for atomic energy applications. Levels of 0.01 and 0.005% Co maximum and lower are commonly listed by the N.R.C.

If the chamber was constructed of steel that is artificially low in cobalt content, then that would suggest that Iran intended the chamber to be used in trigger device development. On the other hand, if no evidence of neutron activation is found upon analysis of the chamber and if it is found to be comprised of steel no different in cobalt content from other steel produced by Azar AB Industries, that would be very strong evidence that the chamber had always been intended for nanodiamond work and no trigger work involving uranium was carried out.

Update: It seems relevant to note how far neutrons can penetrate in steel. The illustration above for the Rutherford experiment is for a very thin foil of gold. Penetration of neutrons into steel depends on the speed at which the neutrons are travelling. The ability of radiation to penetrate into an object is measured as the half-value layer, which is the thickness of the material that is needed to stop half of the radiation that is incident on it. For neutrons, we have this for passage through steel or iron: