The Intercept’s Jenna McLaughlin liberated a copy of the Senate Intelligence Committee’s Intelligence Authorization for 2017 which was passed out of committee a few weeks back. There are two really shitty things — a move to enable FBI to get Electronic Communications Transaction Records with NSLs again (which I’ll return to) and a move to further muck up attempts to close Gitmo.

But there are a remarkable number of non-stupid things in the bill. 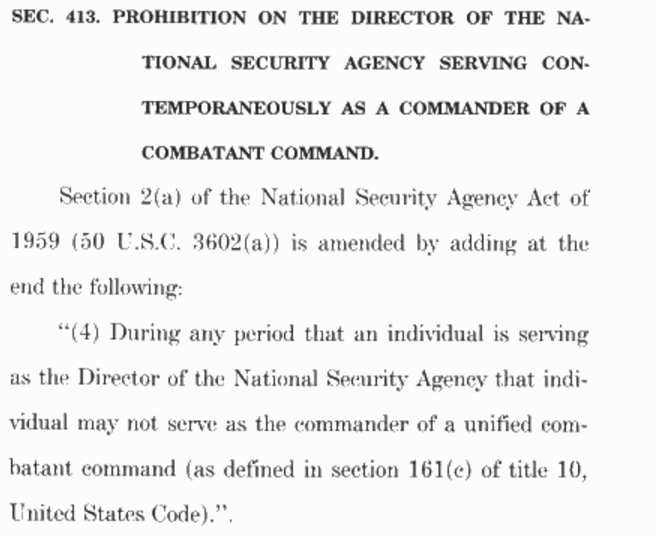 Unless I’m completely misreading it, this section would require the Director of NSA to be a separate person from the head of CyberCommand. It would require Admiral Mike Rogers’ current dual hat to be split.

Correction: DIRNSA and CyberCom would only need to be split if CyberCom gets elevated to be a full combatant command.

That’s a recommendation the President’s own Review Group made back in 2013, only to have the President pre-empt PRG’s recommendation before they could publicize it. It would also likely have some impact on NSA’s decision, earlier this year, to combine the Information Assurance Directorate — NSA’s defensive organization — in with its offensive mission.

Frankly, I think our entire cybersecurity approach deserves a more open debate. The IC has done a pretty crummy job at defending us from attacks, and it’s not clear what purpose their secrecy about that serves.

But I am intrigued that SSCI seems to think NSA should retain its defensive capability, independent of all its offensive ones.