Some Thoughts On The Manafort Indictment 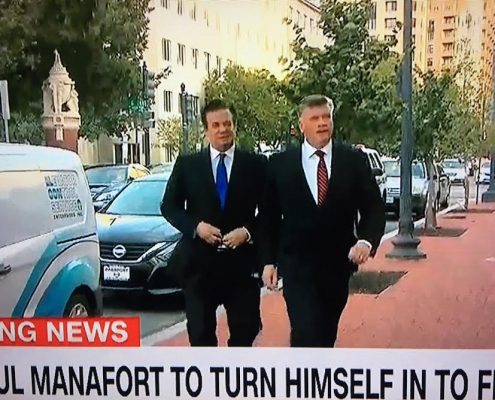 The first shoe has dropped in the big indictment watch initiated late Friday with the news that an indictment had been rendered in the Mueller investigation. Paul Manafort and his longtime business partner Rick Gates have been told to self surrender this morning. Manafort has already arrived at the field office for processing as the attached picture reflects. Here is the NYT story:

The charges against Mr. Manafort, President Trump’s former campaign chairman, were not immediately clear but represent a significant escalation in a special counsel investigation that has cast a shadow over the president’s first year in office. Also charged was Mr. Manafort’s former business associate Rick Gates, who was also told to surrender on Monday, the person said.

Mr. Manafort walked into the F.B.I.’s field office in Washington at about 8:15 a.m. with his lawyer.

Mr. Gates is a longtime protégé and junior partner of Mr. Manafort. His name appears on documents linked to companies that Mr. Manafort’s firm set up in Cyprus to receive payments from politicians and businesspeople in Eastern Europe, records reviewed by The New York Times show.

Mr. Manafort had been under investigation for violations of federal tax law, money laundering and whether he appropriately disclosed his foreign lobbying.

The indictment is here and contains twelve counts for conspiracy, conspiracy to launder money, failure to file as foreign agents, failure to file proper financial reports and false statements. Notable also is the notice of forfeiture of both real and personal property, and any derivative property tied thereto.

The fact that the first shoe is Manafort is no surprise. What is surprising, to me at least, is that it does not appear that Manafort’s wife Kathleen was named. This may be a reflection as to the nature of the charges … the charges may only be for activity she was not involved in. Or not. But, make no mistake, she is involved in many of the charges for tax fraud and money laundering; she has solid exposure. Perhaps Mueller and Andrew Weissmann have already discussed this with Manafort and his lawyer, or maybe that is being reserved as leverage in a potential superseding indictment. But it is extremely interesting that she does not appear to be named yet. Stunning actually.

Add into the status of Kathleen Manafort that she and her husband are reported to be near broke as to liquid funds, and their real estate is already heavily leveraged and now subject to civil seizure at this point. And given the fairly recent outing of Manafort having a very expensive mistress half his age, things cannot be too cozy on the Manafort home front. This is total chum in the water for an aggressive prosecutor like Weissmann. Why did he not take it??

NBC News is reporting that the current charges were brought now because of statute of limitation concerns on some of them, and that further charges are absolutely not ruled out. Which makes it even more curious that Kathleen Manafort is not named.

Manafort is a high value target for the Mueller shop. But so too is his lesser known business partner Rick Gates. Gates was not only with Manafort on the Trump Campaign and DNC Convention, but stayed on in a significant role with Trump throughout the campaign and transition, including the inaugural committee, even after Manafort left. Gates, like Manafort, has close foreign ties, including with Russia and Ukraine.

Two people to keep your eye on are Dmitri Firtash and Oleg Deripaska, Putin allies. As as Spencer Ackerman says
in the money “behind pro-Kremlin party in Ukraine that hired Manafort. He’s indicted in IL. Watch what Sessions does”. Spencer is right about that. Here is some bits from Spencer’s report on Manafort, Rick Gates and Firtash back in August:

Asked whether any Manafort deals seemed particularly troubling in retrospect, a senior administration official replied, “You mean like this one?” and appended a link to a 2016 story on Manafort’s alleged attempts to launder a Ukrainian oil and gas billionaire’s ill-gotten fortune through New York real estate—including the Drake.

The Justice Department is now seeking the extradition of that billionaire, Dmitry Firtash, so he can stand trial for a 2013 racketeering indictment in a Chicago federal court. Two weeks ago, in response to a legal filing from Firtash seeking dismissal of the case, the acting U.S. attorney in Chicago termed Firtash and a deputy as “two organized-crime members” and people “identified by United States law enforcement as two upper-echelon associates of Russian organized crime.” Years before the indictment, Firtash was a major moneyman for the Party of Regions in Ukraine, the pro-Kremlin political faction for which Manafort consulted.

Firtash’s alliance with Manafort to acquire the Drake has been reported before. But far less attention has gone to the involvement of another party: Oleg Deripaska, one of the wealthiest men in Russia—and a longtime Putin associate. In 2006, according to the Associated Press, Deripaska signed a $10 million annual contract with Manafort for what Manafort pitched as political and economic efforts inside the U.S. to “greatly benefit the Putin Government.”
But Manafort was more than Deripaska’s political operative. They were business partners, as well.

“When Paul met with Mr. D last month he told Paul to lock in the other financing elements and then come back to him for the final piece of investment,” Gates wrote to two longtime business associates of Deripaska, Anton Vishnevsky and Andrey Zagorskiy, on July 1, 2008.

According to ex-prosecutors, a business relationship between a Kremlin-tied oligarch, an accused gangster and the manager of Donald Trump’s campaign is the sort of arrangement currently occupying Mueller’s time.

“Any financial dealings with Russia and Ukraine would be considered within the scope of [Mueller’s] current mandate,” said Barbara McQuade, the U.S. attorney in Detroit until Trump fired her in March. “With the search warrant executed on Manafort’s home, looking for bank records, tax records, and the like, it seems like this is the kind of thing that Mueller would be interested in.”

To sum up, today’s indictment news is quite a big deal. The spokes that look likely to come out of it lead directly to the biggest Russian interests imaginable. Ones that very likely lead to Trump as well, whether financial or in relation to potential collaboration and conspiracy to influence the 2016 election.

Time will tell where this goes, but this is an extremely significant and rollicking start.

Indictment Weekend Trash Talk Paul Manafort Indicted for Laundering 50 Times as Much Through Rugs as Through...