Michael Tracey has a story that purports to show that the Senate Intelligence Committee, in negotiating voluntary cooperation with Chuck Johnson, is criminalizing being Russian.

The Senate committee probing alleged Russian interference in the U.S. political system has deemed anyone “of Russian nationality or Russian descent” relevant to its investigation, according to a document obtained by TYT.

On July 27, 2017, Charles C. Johnson, a controversial right-wing media figure, received a letter from Sens. Burr and Warner requesting that he voluntarily provide materials in his possession that are “relevant” to the committee’s investigation. Relevant materials, the letter went on, would include any records of interactions Johnson had with “Russian persons” who were involved in some capacity in the 2016 U.S. elections.

The committee further requested materials related to “Russian persons” who were involved in some capacity in “activities that related in any way to the political election process in the U.S.” Materials may include “documents, emails, text messages, direct messages, calendar appointments, memoranda, [and] notes,” the letter outlined.

Doss’s statement was in response to a request made by Robert Barnes, an attorney for Johnson, for clarification as to the SSCI’s definition of a “Russian person.”

How the committee expects subjects to go about ascertaining whether a person is of “Russian descent” is unclear. “It does indicate that the committee is throwing a rather broad net,” Jonathan Turley, a professor of law at George Washington University, said. “It is exceptionally broad.” In terms of constitutionality, Turley speculated that “most courts would view that as potentially too broad, but not unlawful.”

Johnson played a key role in several known parts of the election operation. In addition to brokering Dana Rohrabacher’s meeting with Julian Assange, all designed to provide some alternative explanation for the DNC hack, Johnson worked with Peter Smith and Weev to try to find the deleted emails from Hillary’s server.

Johnson said he and Smith stayed in touch, discussing “tactics and research” regularly throughout the presidential campaign, and that Smith sought his help tracking down Clinton’s emails. “He wanted me to introduce to him to Bannon, to a few others, and I sort of demurred on some of that,” Johnson said. “I didn’t think his operation was as sophisticated as it needed to be, and I thought it was good to keep the campaign as insulated as possible.”

“The magnitude of what he was trying to do was kind of impressive,” Johnson said. “He had people running around Europe, had people talking to Guccifer.” (U.S. intelligence agencies have linked the materials provided by “Guccifer 2.0”—an alias that has taken credit for hacking the Democratic National Committee and communicated with Republican operatives, including Trump confidant Roger Stone—to Russian government hackers.)

Tracey’s claims are based on this email (and, clearly, cooperation with Johnson). 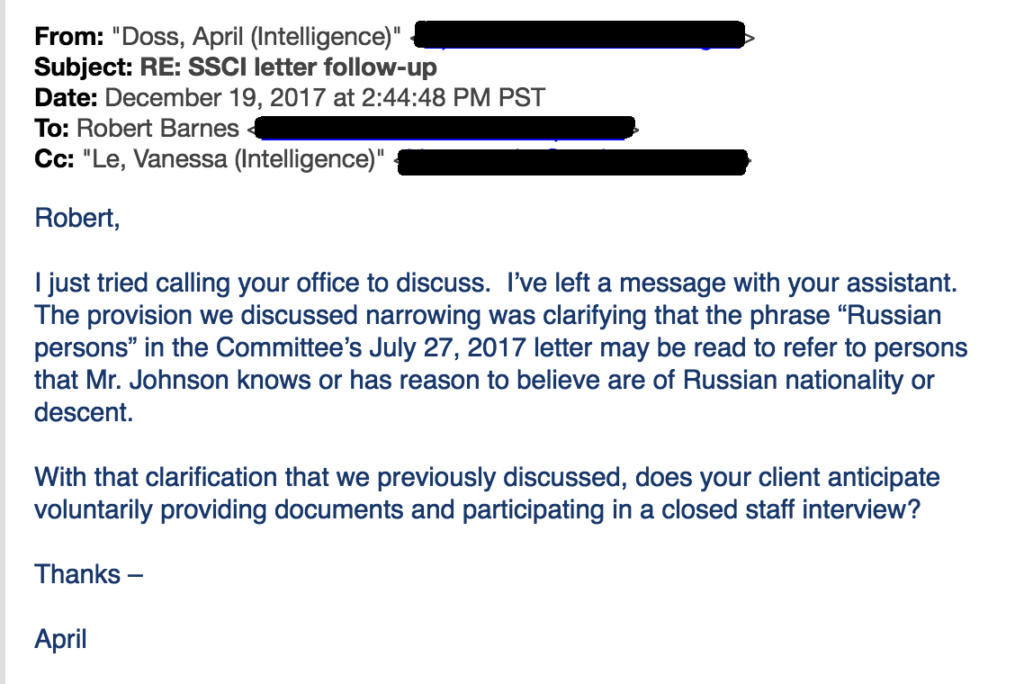 Except Tracey (and so presumably Johnson) appear to be misrepresenting what is going on.

When SSCI originally asked for Johnson’s cooperation in July, they asked him to provide communications “with Russian persons, or representatives of Russian government, business, or media interest” relating to the 2016 election and any hack related to it.

And while Tracey calls the December follow-up a “clarification,” Doss clearly considers it a “narrowing” of that July description. So the description Tracey finds so outrageous — people of Russian nationality or descent — appears to be a subset of what might be included in the original request.

Moreover, the narrowing might be really detrimental to SSCI’s ability to learn what Johnson was up to when he was seeking out Russian hackers who might have Hillary’s server. Consider just the examples of Karim Baratov or Ike Kaveladze. Both are likely suspects for involvement in the events of 2016. Baratov — the hacker who recently pled guilty to compromising selected Google and Yandex accounts for FSB — is a Canadian citizen born in Kazakhstan. Kaveladze — who works for Aras Agalarov, has past ties to money laundering, and attended the June 9, 2016 meeting — is an American citizen born in Georgia. Neither is ethnically Russian. So if Johnson had any hypothetical interactions with them, he could cabin off those interactions based on this narrowed definition of what counts as a Russian.

To say nothing of Johnson’s interactions with Assange, who is Australian, yet whose ties to Russia are unclear. Effectively, even if Johnson knew that Assange had coordinated with Russia last year, he wouldn’t have to turn over his communications with him, because he’s not himself Russian.

According to Tracey’s piece, Johnson says he won’t cooperate regardless, in spite of his lawyer’s efforts to narrow the scope of any cooperation.

But I find it interesting that his lawyer attempted to narrow any testimony in a fashion that might hide important parts of Johnson’s actions.