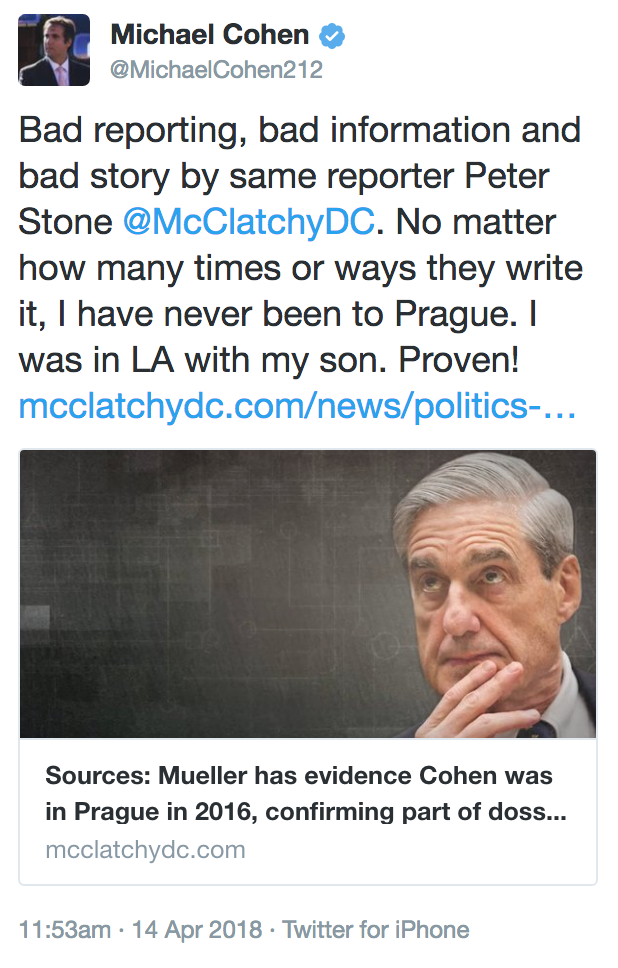 As you know, I’ve long asserted that the Steele dossier has not been proven — and I extend that caution to the recent report about investigators having found evidence that Michael Cohen traveled from Germany to Czech Republic sometime in 2016.

But as I was writing about something else I couldn’t help but notice something about this paragraph from his lawyers’ motion to show cause (basically, his request to put someone other than the government — preferably his own lawyers — in charge of determining which of the materials they’ve seized are subject to attorney-client privilege).

This arduous journey began for Mr. Cohen over 16 months ago with the publication of his name in the so-called Steele dossier. The references to Mr. Cohen in the Steele dossier are false and have been completely debunked. Nevertheless, because of those false allegations, Mr. Cohen has had to spend the last 16 months defending himself in front of numerous government investigatory agencies.

It appears in the statement of fact section, meaning it is supposed to be backed by a statement in the declaration submitted by his attorney, Todd Harrison, as almost every other sentence in that section is. For comparison, note how the paragraph just before the Steele dossier one cites each assertion to a paragraph of Harrison’s declaration.

As it is, the government called out Cohen for playing fast and loose with one of his claims — that the government seized his family’s health records.

Cohen also suggests that the USAO-SDNY seized personal communications with Cohen’s family and medical records.Notably, this assertion does not appear in the sworn affidavit of Cohen’s counsel, Todd Harrison, and to the extent the unsworn claim is true, it is likely because such records exist on Cohen’s electronic devices, which were expressly covered by the search warrants.

And the government calls out at more length the way he makes a carefully couched claim that he cooperated with ongoing investigations. (Cohen’s attorneys play fast and loose with their claims in one other area I’ll return to.)

Cohen would like Judge Kimba Wood to believe that the dossier has been debunked. But his lawyer is unwilling to stake his own legal reputation on the claim.

This is a more subtle version of what Cohen tried in his declaration to the House Intelligence Committee. That declaration stopped short of outright denying the dossier’s allegations (aside that he went to Prague) then, and this one falls even further short.

So whether or not Cohen went to Prague, it seems that his lawyer is unwilling to claim the other things in the dossier are false.

Update: I’ve come up with something that may be a plausible explanation of the new Cohen in Prague news: Buzzfeed hired Anthony Ferrante to conduct an investigation into the dossier claims, in hopes of corroborating enough of it to defeat the several lawsuits — including Cohen’s — against it. His team is precisely the kind of investigator that might be able to scan border crossings with sufficient attention to see Cohen traveling across one. Certainly, if they found anything they would also share with Mueller’s team.

How Yevgeniy Nikulin Might Play into the Mueller Investigation Earlier in the Week, Trump May Have Looked Presidential; on Friday, He Looked...