The WSJ reports that Mueller’s team has obtained an analytical document from Psy-Group, the company of Joel Zamel, that was offering to help the Trump campaign both before and after the election.

Special counsel Robert Mueller’s investigators have obtained a presentation prepared by an Israel-based private intelligence firm that outlines ways in which Donald Trump’s 2016 election was helped by fake news and fake social-media accounts, according to people familiar with the presentation and documents reviewed by The Wall Street Journal.

Psy-Group’s founder, Joel Zamel, is under scrutiny from U.S. investigators because of his close relationship with the government of the United Arab Emirates and his involvement in a meeting with Mr. Trump’s eldest son shortly before election day, the Journal has reported.

Mr. Zamel met with Donald Trump Jr. at Trump Tower in the weeks before the 2016 election along with George Nader, a top adviser to the crown prince of the United Arab Emirates, to discuss an offer to help boost the campaign, according to people familiar with the matter. Erik Prince, a U.S. defense contractor who specializes in the Middle East and had close ties to the campaign, attended the meeting, the Journal previously reported. People involved in the meeting say nothing came of it and the Psy-Group didn’t perform any work for the Trump campaign.

The presentation the Special Counsel is apparently scrutinizing is 9 pages; most pages describe generically how to seed bots to later swing opinion. But there’s one page that purports to show how this works in a swing state. That swing state in North Carolina. 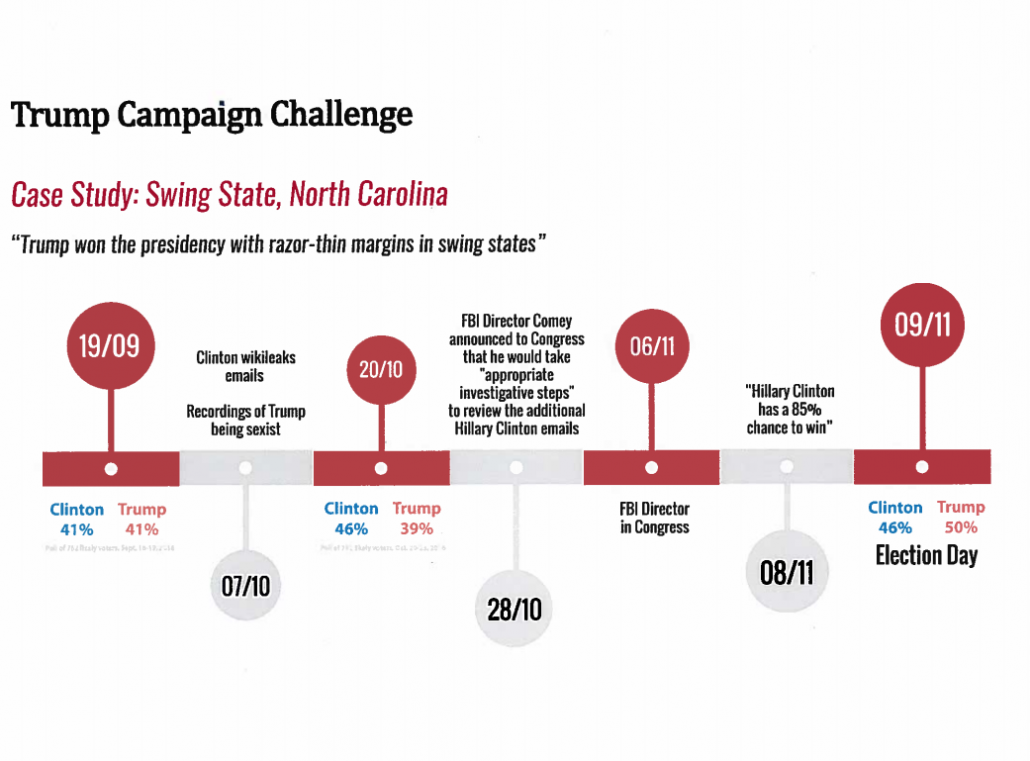 While we can’t measure Psy-Group’s claims without a script, it seems that the group claims social media helped Trump turn a 7 point deficit in the wake of the Access Hollywood tape to a 4 point win on election day.

NC is an interesting choice because Trump also benefitted from the most aggressive voter suppression drive in the state. And because it’s the state for which Russian hacking — of VR Systems and, possibly, of poll books in disproportionately democratic precincts — may have actually affected the election.

It’s interesting for one more reason: it’s the state of Senate Intelligence Committee Chair (and Trump NatSec advisor, during the election) Richard Burr. Burr won his race by more than Trump did, but still within the scope of the swing mapped out by Psy-Group.

As I noted, the election tampering report generated by Burr’s committee, largely failed to address the vulnerability and importance of vendors like VR Systems.

But we might not find that out, because the guy in charge of the purportedly responsible investigation of such things has scoped the investigation in such a way that his own re-election could not be questioned.